When I started out,  the hunter had little choice  when  it  came to choosing the magnification of a scope to mount on a big-game rifle. The majority of good scopes were fixed-powers, and since 2-1/2x was the accepted standard for hunting in heavy cover and 4x for plains and mountain country you simply chose which one of the two best suited your particular conditions. For my own part I had a 2-1/2x Raven on my .303-25 and a 4x Kahles on my Brno .270.

Just as optics design has progressed, the choice has become many times more complicated. Nowadays there are very few fixed-power scopes in the 2-1/2x to 3x bracket, and still quite a number of 4xs, but you’ll have to look hard to find a decent 6x glass. Fixed-power varmint scopes are available from 12x to 30x, while variable-power models cover every possible magnification range. In fact, there’s such a wide variety that the hunter really needs to take the time to evaluate his scope needs before he makes a firm choice.

Naturally, no one can tell you what you need or should buy.  And from the letters I get few of the guys behind the counter in gun shops have much of an idea either; they’ll sell you a 6.5-20x to put on a .30-30! Having used scopes on hunting rifles for nigh on six decades and for nearly every kind of situation you’re likely to encounter, I’ll risk possible criticism by offering you some constructive suggestions that may keep you from investing in a scope that’s totally unsuitable in the field.

Let’s stay away from technicalities and design features and get right down to the nitty-gritty – practical considerations, such as magnification, weight and  bulk. It should be obvious that where optics are concerned, you only get what you pay for.  Always buy the best that your budget will stand from a manufacturer with a reputation for quality and rugged reliability and you won’t go far wrong. This doesn’t mean that you have take out a second mortgage, but avoid real El Cheapos like the plague.

First, let’s settle the question of magnification. How much do you need for big-game hunting? Few realize that a low power scope is the finest of all sights for use in lignum and brush, and the needs of the brush hunter are entirely different to those of the open-country hunter, but keep in mind that as the  magnification is increased, the field of view decreases. For example, if a certain brand of 4x scope has a field of 35 feet at 100yds, the 6x will have a field of about 20 feet and that of his 10x about 12 feet. On the same makers 3-9x variable, the field of view will be around 30 feet at 3x and 12 feet at 9x.

These specs are important to the hunter because the smaller the field of view the more difficult it is to quickly find and aim at distant game or track a running animal. Where fixed-power scopes are concerned, the brush hunter who does most of his shooting at close range and often at game on the run is pretty well fixed with a scope of 2-1/2x to 3x. In these low-powered models the latitude of eye relief is enormous, the eye will get a usable picture as close as 50mm and as far away as  125 or 150mm. They also have a wider field of view – from 40 to 50 feet at 100yds – large enough so you won’t have any trouble picking up an animal quickly and tracking it if it starts moving.

The open-country hunter, on the other hand, needs more magnification in a fixed-power scope. At one time 4x was the preferred choice on plains and mountain rifles, but today many hunters have shifted from 4x to 6x. A friend of mine has a fixed 6x on all of his rifles. He has found that a 6x enables him to tell instantly if a deer has antlers or not. He doesn’t have to look with a binocular, put it aside, and pick up his rifle to shoot. He has found too, that the 6x gives him enough definition to kill rabbits and foxes consistently to about 200 metres. 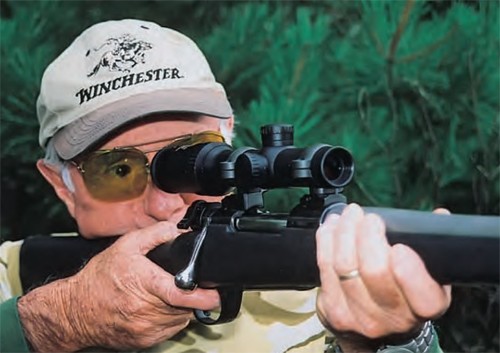 In my book a good 6x like the Swarovski I have on my Sako .308 is just about perfect. The field of view is adequate and the power is high enough for accurate shot placement and 6x is relatively easy to handle when shooting from some hastily assumed field position. In fact, I’ll stick my neck out and say that if you can’t see a deer well enough with a 6x scope to shoot accurately, then he’s probably too far away to shoot at.

A variable-power scope of some kind is by far the most popular choice with all kinds of hunters. Its main advantage is versatility so that one scope can be used for a variety of purposes, terrain and light conditions. Variable-power scopes are no longer optically inferior to fixed-power models, at least the better quality ones aren’t. They are however, generally a bit heavier than fixed-power scopes and the high-range ones, intended for varmint shooting are a lot more bulky.

For big-game hunting, low-range variables are far and away the best. Scopes in the 1-4x, 1.5-5x, 1.5-6x, 2-7x and 2-1/2-8x will add little more weight and bulk than a comparable fixed-power. Although the 3-9x has topped the popularity polls for years, it is absolute maximum because there’s really little justification for for any higher power in the big-game field. Having said that, there’s a few 3-9xs, which have one-inch tubes and 36mm objectives rather than the 40, 42 and 50mm that seem to dominate that power range. If I were to choose one variable for all my hunting, however, it would still be a quality 2-7x or 2 1/2-8x model.

Any time a hunter buys a scope, he is faced with the question of which reticle is best. The Duplex-type introduced by Leupold and copied by almost every other maker worldwide is as good as any and better than most. This reticle has heavy side-bars that usually taper to fine crosswires in the centre. The theory is that the heavy outer sections draw the eye to the fine centre crossires in poor light, but in good light they offer the advantage of a fine crosswire for long range shooting. There’s considerable variation in the thickness of the plex-style reticles, Europeans scopemakers prefer much heavier side bars and crosswires than the Americans, because much of their hunting is  done at dawn and dusk and even in moonlight from a hochsitz. However, all work the same way and most hunters will agree that the plex-style reticle is best for big-game hunting.

The old traditional crosshair is still popular with varmint shooters, but the big-game hunter needs a coarse crosshair that subtends at least one-inch at 100 yds. Anthing finer would be hard to see in poor light. And the tapered crosswire offers no advantage for big-game because the centre portion is too fine. 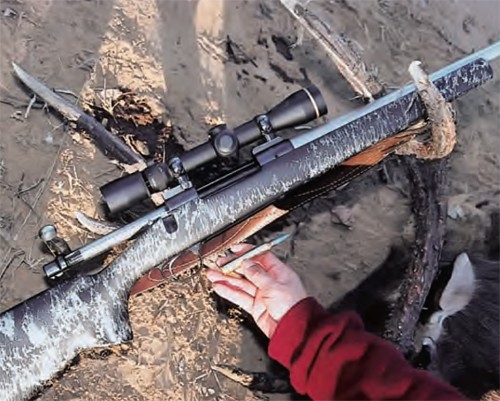 Mauser .338 Win. Mag. is fitted with Leupold Vari-XIII 2.5- 8x – arguably one of the best hunting scopes ever produced for big-game.

The dot reticle has a small but loyal following. While I’d rank it as being second to the plex, it’s nowhere near as versatile. In heavy cover and poor light a large dot is best, since it’s easy to see and aim quickly with – one that subtends at least 2 to 3 inches at 100 yds. But in open country the dot covers too much of the target area, so the best choice is a smaller dot, one that covers one-inch at 100yds.

The old flat-top post and pointed picket post  reticle, with or without a horizontal wire are still available, mainly  from European scopemakers, but their lack of precision for long  range shooting severely limits their usefulness.

Variable-power scopes are available with all manner of fancy  reticles – BDC and Rangefinders with stadia lines are too  inexact, and Mil-Dot and Tactical- style graduated reticles which  aid in rangefinding and windage in long range shooting, were  intended for special-purpose military and law enforcement use.  For big-game out to long ranges of say, 300 to 400 yds, I find  such complicated reticles clutter up too much of the field and  hide too much of the target. For me the Duplex and its variations seem to work just fine.

In conclusion, don’t fall for a salesman trying to sell you a  riflescope  for big-game hunting that offers too much  magnification. Instead of improving your accuracy, it can actually impair it. Look for a scope that’s light and not too long and bulky, with low to medium magnification, a wide field of view and the proper reticle – these are the worthwhile  features of a good big-game hunting scope.

This article was first published in Sporting Shooter, December 2009.