There is an old saying, you cannotappreciate something fully until you are forced to operate withoutit.iThis past weekend at the M.R.C.A. I took part in the annual 400mtelescopic match with my newiiM17 .308 conversion with a stubby heavy barrel and spliced togethertimber stock. I had left on the standard Harris bipod with fixedlegs, which presented a few shortcomings upon initial set up on thefiring point. As the ground was not perfectly even the crosshairswere skewed to the right, deciding a flat set of crosshairs would bepreferable I adjusted the length of the left leg on the Harris andtightened the locking wheel to set it so that the horizontal reticlewas more or less parallel with the target frame, I then commenced mysighting in process.

Having establishedmy zero, we began our first 10 round single snap when I noticed twothings. The first being that as the recoil shifted the legs of thebipod from having forward pressure, exerted by the shooter’sweight, to being briefly rearward, from the rifle’s recoil, theystarted to dig into the earth’s surface at uneven rates resultingin a slight shift in the axis of the reticle. The second being, whenforward pressure was applied to the pod through the stock, there wasuneven resistance provided by the differing leg lengths which createda perception of the rifle wanting to torque to the left when pressurewas applied. 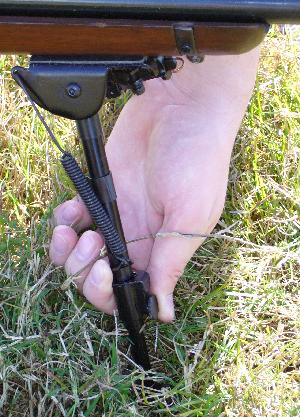 The locking wheel for the standard Harris allows for levelling on uneven surfaces but has its drawbacks when used during sustained fire.

Both of thesehowever paled in comparison to the shortcoming experienced betweenthe seventh and eighth shot of the detail whenthe finger tightened locking wheel on the left leg gave way andcanted the rifle all the way to the left.iiiFrom then on, with my rifle canted to a different angle from theinitial sight in, I was never in the hunt to post a competitivescore.

All this brings meto a state of appreciation for the comprehensive setup I have on myHowa .223 heavy barrel, held lovingly in a Bell & CarlsonMedalist stock.ivRather than the regular Harris currently on my .308, the Harris in my.223 is of the swivel variety with notched legs and a Pod-Loc, thisallows me to lock the cant angle when desired. With all of thiscombined I can eliminate all the issues I had experienced with thestandard bipod arrangement. The notched legs allow me to set each legat a verifiably equal length, thus removing the torquing that hadbeen resulting from the uneven leg lengths required to level thestandard Harris. The ability to swivel and lock the bipod obviouslyallows you to level your reticle on uneven terrain while avoiding theinconsistencies of compensating with variable leg lengths. 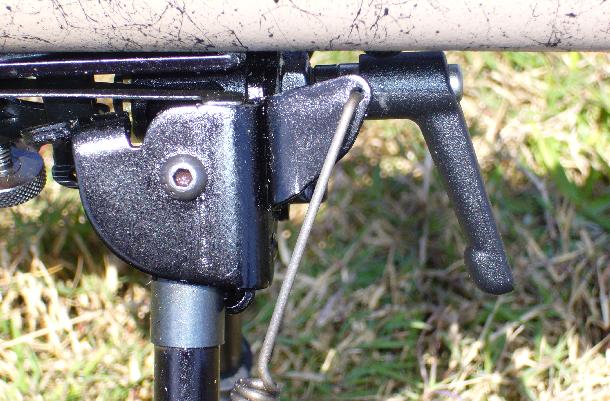 Pod-loc accessory provides the shooter with easy control over the amount of resistance applied to the swivel feature.

All of theadvantages of the swivel variety Harris bipod would be however,undermined if there was no way to ensure that the canting wasreliably level to begin with, as well as being consistent throughout,as the pod legs dig into the ground as multiple shots are taken fromthe same static position as may be required in the field as well assupported rifle matches. Here is where the real star of the articlecomes in to give the whole setup the ability to make the most of itsadvantages. Perched upon my trusty Nikon Buckmaster 6–18 powerscope is a humble spirit level; this little glass tube with shiftingbubble provides the most essential function of the whole package, aconsistent reference point. This will allow you to reset, withconfidence, your cant angle as conditions change, as well as removinga variable from your calculations if you are required to make yourfirst shot count. Combine that with the conveyed image that you maylook as though you have half a coherent idea as to what your aredoing, I would certainly rather have one than be forced toendure without as this recent experience has helped me to appreciate. 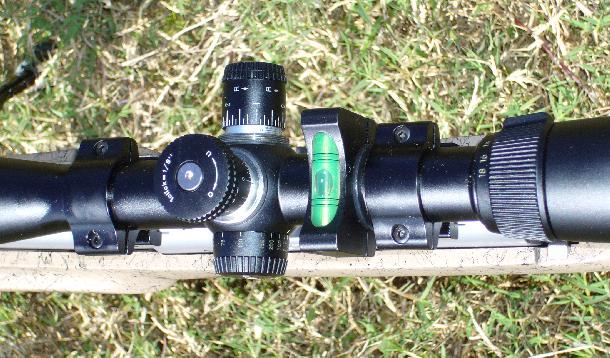 A quick and easy reference of a level axis, easily visible to the shooter from the prone position.

The two differentstyles of bipod detailed, from the extensive range Harris offers tothe market, show the necessity for keeping your intended use in mindwhen selecting accessories for your rifle as many of the factorswhich make the more complicated model ideal revolve around my needfor multiple shots to be taken from a static position. While thenotched swivel model may be the ideal unit for my requirements, itwill not be for someone who desires to keep weight to a minimum or ifreliable mechanical simplicity is preferred over greater complexity.

i If this is not an old saying I hereby claim it to be my own, you may repeat this with my blessing so long as it is credited to me and you pledge to deliver a case of Tooheys Old to the RAE rifle club, where it is needed most.

ii As far as ownership is concerned, the action was probably manufactured roughly around the same time of my Grandfather’s birth.

iii This also resulted with me inventing some new curse words while attempting to rectify this between the target exposures.

iv The whole rig can best be likened to a burger with the lot, which has claimed a few of 1st outright results within the M.R.C.A.