We constantly get letters asking about the feasibility of rechambering rifles for various cartridges, and some of the questions strongly suggest that many of the correspondents have no idea of what it is all about. For example, we recently had a query as to whether it would be all right to rechamber a 6.5x55mm Swedish Mauser 96 to .30-06, and another asking if it wouldn’t be a good idea to rechamber a .338 Win. Mag. to .416 Remington. A common question comes from guys who’d like to rechamber a standard .22 rimfire rifle to .22 Magnum or even .22 Hornet. Let’s look at some of the facts.

Rechambering consists of running a reamer into an existing chamber and changing its dimensions to make it suitable for another cartridge. If this is to be done successfully, the following factors must be present.

2. The barrel should have sufficient thickness of metal over the chamber section to make the conversion to the larger cartridge safe, and the chambering reamer should clean the old chamber out.

3. The action should be long enough and have sufficient strength to contain the new cartridge.

4. The bolt face and extractor should be of the correct size or else capable of being modified to work properly.

5. The new cartridge should work through the magazine as it is or should be able to be altered so that it feeds properly.

The same situation exists with the .338 Win. Mag. The hole in the barrel is much too small, the action and magazine both too short. A .22 Long Rifle bore is too small for the .22 WMR cartridge, and most .22 rimfire rifles aren’t strong enough to contain the much higher pressures of the .22 Hornet, not to mention their unsuitable magazines and breech bolts.

Many years ago, a company in America rechambered and otherwise modified a lot of old Russian Moisin-Nagant rifles chambered for that country’s 7.62x53R service cartridge. They worked after a fashion but the 7.62×53 cartridge is larger at the rear end than the .30-06. Consequently the .30-06 reamer didn’t clean out the chamber. This posed several problems. For a start, the MoisinNagant has a shorter magazine and although military bullets measure .309 to .311 inch, many rifles had badly oversized bores, some as loose as .316 inch. The ones with .309 in. bores shot .308 calibre bullets reasonably well, but the oversized ones were hopelessly inaccurate. What is even worse, the Russian action isn’t strong enough to withstand .30-06 pressures.

Many 7.7mm Jap Arisakas have likewise been rechambered to .30-06. Again, bore and groove diameters are oversize, but can be used. But just like the Russian cartridge, the base of the 7.7mm Arisaka is larger than the .30-06 at the rear end. If a straight rechambering job is done, the rear of the chamber is a loose fit. If a cartridge with a soft or brittle case is used, trouble may result when the case lets go and escaping gas is released and floods toward the shooter’s face. I heard of at least one chap who was killed by such a conversion. The only way to make the conversion safe is to cut the threads off at the breech, and then re-thread and rechamber. 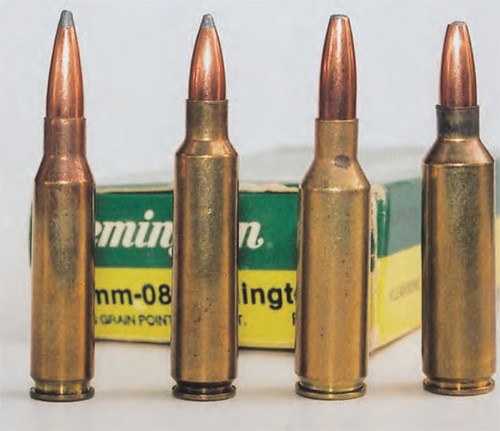 On the other hand many safe rechambering jobs can be performed. A Winchester Model 70, old Remington Model 721 or any other strong, Mauser-typefront-locking rifle in .30-06 can be or .300 Winchester Magnum. So can a Model 1917 Enfield.

As well as rechambering, the bolt face and extractor must be opened up, and the magazine altered by widening the rails. Older commercial rifles with Mauser-type actions in .300 H&H Magnum can be easily rechambered for the .300 Weatherby.

The Remington Model 700 in .30-06 or .270 is not suitable for conversion to magnum calibres because of the complicated face of that model’s bolt, but it can be rechambered for a longer more powerful cartridge with the same head size. For instance, 7×57 to .280 Remington. However, the Model 70 in .270 can be converted to .270 Weatherby Magnum, as can Mark X Mauser rifles. A .257 Roberts in the Model 70 can be rechambered to the .25-06 or to the .257 Weatherby Magnum. It can also have the chamber cut to .257 Ackley Improved, but why bother when the .25-06 is available?

The most common rechambering job concerns altering a factory chamber for an improved case. This amounts to creating a larger (than original) chamber that will safely allow fireforming factory cartridges to have larger dimensions. Normally this gives the case a sharper shoulder, minimum body taper and an average increase of about 5-percent in case capacity. Improved cartridges can be reloaded to give somewhat higher velocity and a flatter trajectory. Two of the most popular improved cartridges are the .257 and .30-06. Despite over-enthusiastic claims that have been made for them, the .257 Ackley produces about 100fps over the standard Roberts, but only if the standard round hasn’t been long-throated, while the .30-06 Ackley is humping to gain an extra 60 fps. Most experienced reloaders don’t consider improved cartridges worth going to all the trouble.

If the action is suitable it can be rebarreled, but that’s another story; a new chrome-moly barrel fitted, chambered and blued costs from $550 to $800 and a stainless barrel is $120 dearer. By comparison the average rechambering job costs about $150.00.

This article was first published in Sporting Shooter, March 2011.