First focal plane or second focal plane? The choice is easy – once you know what it all means!

Every rifle scope out there has a purpose. Some can be considered multi-purpose but one scope cannot usually fulfil all your requirements. The reticle may be too thick, there may not be enough elevation in the turret, the design may not have enough power in the zoom, or perhaps there’s no reference marks in the reticle when some are obviously required.

Looking for the best telescopic sight for your needs can be a tricky experience when you’re not armed with the knowledge.

One choice you have is between having the reticle in the scope’s first or second focal plane. This makes a big difference to how you use the scope and is an important but often overlooked aspect of choosing optics.

Before I get any further into this article, I’ll state outright that I will not be talking about scopes in the lower price range of $50-$250 as they present their own set of problems, most of all being that they’re just cheap pieces of rubbish.

A good quality centrefire rifle requires a good quality scope. The glass should match the rifle. Too often I have seen a good, competitively priced rifle such as Tikka T3 topped with a $200 scope. This is like putting retreads onto a late-model Monaro.

Scopes with first focal plane (FFP) reticles are becoming more popular for tactical and long-range shooters as they provide contestant values in the reticle throughout the variable power range. FFP scopes are more expensive due to costly and time-consuming design and production.

Scopes with second focal plane (SFP) reticles remain popular with target shooters and other shooters who want the reticle to remain the same size throughout the variable power range. The reticle does not clutter the image at maximum power settings. 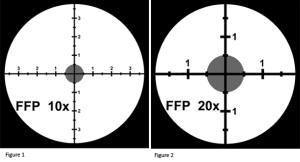 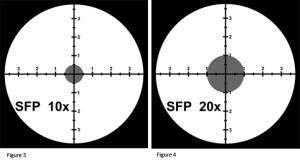 1. Maintain the match between the reticle value and the turret value (milrad turret and milrad reticle)

2. Calculate the range to the target knowing the values of the reticle and size of the target

3. Calculate the size of objects or targets knowing the values of the reticle and range to the target

1. As the reticle stays the same width with an increase in image size, this reticle will not clutter the target when on very high power settings.

2. SFP rifle scopes are usually cheaper for the same make.

Narrowing down the choice and setting boundaries early on will help you find your ideal scope. Deciding on FFP or SFP rifle scopes to suit your requirements will eliminate problems down the track.

There are other factors that come into selecting your rifle scope, such as variable or fixed power, milrad or MOA, external turrets or internal turrets, glass quality and so on.

Glen Roberts is the chief instructor at Precision Shooting Australia