Goondiwindi-based hunter Christie Pisani gained some well-deserved publicity when she secured a coveted spot in the final six of the Extreme Huntress reality TV show in the USA.  Now she’s back in Australia after filming the series – so Sporting Shooter caught up with her to see what it was all about.

Of course, Christie is bound by a strict confidentiality agreement, so she couldn’t tell us all the juicy details. What she could say, though, was that she had an absolute ball, learnt heaps about hunting and made some good friends along the way.

Christie, as you may remember, is primarily a bow hunter back here in Australia, having successfully hunted (amongst other things) pigs, goats and deer with the stick and string.  Originally from west of Sydney, her career as a paramedic saw her based first in Gympie, Queensland, and more recently Goondiwindi.

“The other five girls came from all over the world,” said Christie.  “There were two from the USA (Montana and Texas), and one each from Sweden , South Africa and Canada. We all got along like a house on fire, and ended up the best of mates.  I guess we all have very similar interests and outlooks.”

The show was filmed over five full days at the 777 Ranch, near Hondo in Texas, which is a game ranch that breeds a range of exotic African and Indian game species. “Some of the species are endangered in their native country, and so excess stock from 777 are used to replenish the original populations,” says Christie.  “We all got to hunt twice a day, once as primary hunter and once as the back-up hunter. All the girls were successful in the field, each taking a trophy animal and a management animal.”

The hunting was a little different to what Christie was used to, largely because of the entourage that accompanied the huntress’ every move. “On every hunt there would be the two girls, followed by a cameraman, a judge and a representative from the ranch,” said Christie.  “It was more difficult than normal to keep quiet”, she laughs. 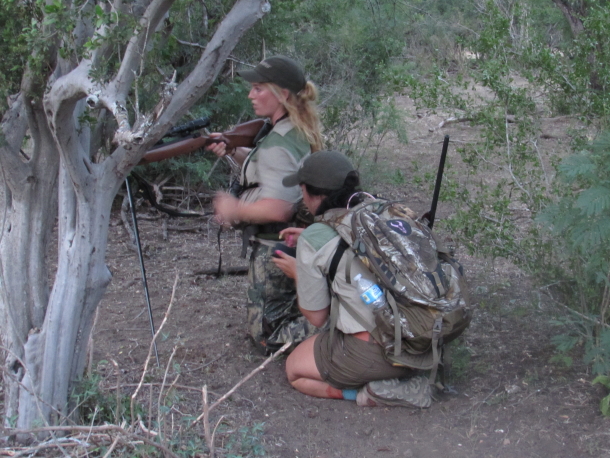 Each contestant hunted twice each day under the watchful eye of a judge.  All the girls were successful in the field.

The hunting skills of each huntress was assessed on each hunt, and these scores counted towards determining the final winner (one of the judges, by the way, was the famous American hunter Jim Zumbo). Also contributing towards determining the winner were scores awarded on the basis of the different hunting skills tests that the girls faced each day.

“There were five skills stations,” says Christie. “We were tested on our long range shooting, a simulated buffalo charge with a .375 H&H magnum, accuracy with a recurve bow, and a fitness test that involved running and then shooting.  We were also subjected to a tirade of anti-hunting abuse to see how we responded.”

On behalf of the team at Sporting Shooter, we wish Christie all the best in her quest for the title of Extreme Huntress. In the meantime you can keep up with the latest developments and get alerts about when the episodes are available for viewing on line, by ‘liking’ the Christie Huntress Facebook page.  You should also look out for articles from Christie gracing the pages of Sporting Shooter.  She’s agreed to write for us and we can’t wait!