To shooters everywhere,
below appears an email that I received this morning from our good friends and Nioa, Australia’s proud appointed agents for Savage Arms. It speaks volumes about the ignorant and ill-informed anti-gun brigade out there, whose mission in life appears to be aimed at making shooters’ lives more difficult without any justification whatsoever. The offender in this case is a Lismore Shire councillor, who took it upon himself to share his ignorance and prejudice with equally ignorant facebook respondents.
Readers may wish to respond to his facebook posting which appears below. In the meantime, congratulations to Ken Stevens for telling Councillor Clough that we don’t lie down and cop ignorance and stupidity directed at the beloved symbols of our sport.

Re: Savage Trademark,
I am constantly amazed that in this day and age where accurate information is so easily obtained that we still have people like yourself making stunningly ignorant assumptions. Then, to add insult to injury you place your ill informed opinions on a public domain like Facebook for all the world to see.

If you had taken even a few minutes to research your subject matter you could have easily found the following information.

The Savage Arms Company was originated in 1894 by Arthur Savage in Utica, New York. A native of Jamaica, Arthur led a interesting life, having been schooled in England and the United States. In his thirties, he explored the interior of Australia and later became the owner of the largest cattle ranch in Australia.

After moving to Utica, New York, he developed (amongst many other things) the Savage Halpine torpedo, became the Superintendent of the Utica Belt Line Railroad, and invented the first “hammerless” lever action rifle with the entire mechanism enclosed in a steel receiver

In 1919, Chief Lame Deer approached Arthur to purchase lever-action rifles for the Indian reservation and the two men struck a deal. The tribe would get discounted rifles and Savage would get their support and endorsement.
It was at this time in the company’s history, that Arthur Savage added the Indian head logo (a direct gift from the Chief) to the company name.

Your pre-judicious assumption that the famous Savage Arms “trademark” is racially inspired, is as uneducated as it is insulting.

I, and I’m sure many of your constituents, would expect someone in your position to behave in a more measured fashion in future. I also think a retraction of your biased statement regarding the Savage trademark is in order. 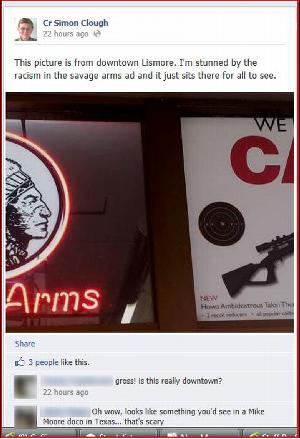