by Michael Gibson 1 year ago3 months ago

Feral pigs are one the most destructive feral animals seen around the world. They are responsible for $106 million a year of agricultural crop damage and spread disease. Farmers spend $50 million annually to try and control them.

A recent study has shown pigs are also causing unwelcome carbon emissions. Wild pig populations globally are uprooting carbon stored in the soil and releasing about 4.9 million metric tonnes of carbon dioxide every year – the equivalent of 1.1 million cars.

The Weekly Times reported – UQ’s Christopher O’Bryan said the animals were one of the most invasive invertebrates in the world and behaved “just like tractors ploughing through fields”, disturbing soil carbon as they went.

“We already know they threaten multiple ecosystems, they threaten biodiversity – now we are looking at the effects on climate change,” Dr O’Bryan said.

“Since soil contains nearly three times as much carbon than in the atmosphere, even a small fraction of carbon emitted from soil has the potential to accelerate climate change.”

“The study is the first to look at the pigs’ global effect on climate. Modelling shows the animals are uprooting between 36,000 to 124,000 square kilometres each year”.

Nicholas Patton, a PhD student at the University of Canterbury, said there was some uncertainty in the modelling as a result of the variability of the carbon content in soils and the densities of wild pigs in different areas.

In addition to their climate impacts, the destructive impact of wild hogs has been well documented. O’Bryan said managing the animals was a challenge that would involve prioritising whichever of their impacts was deemed most significant.

“At the end of the day, feral pigs are a human problem. We’ve spread them around the world. This is another human-mediated climate impact.” 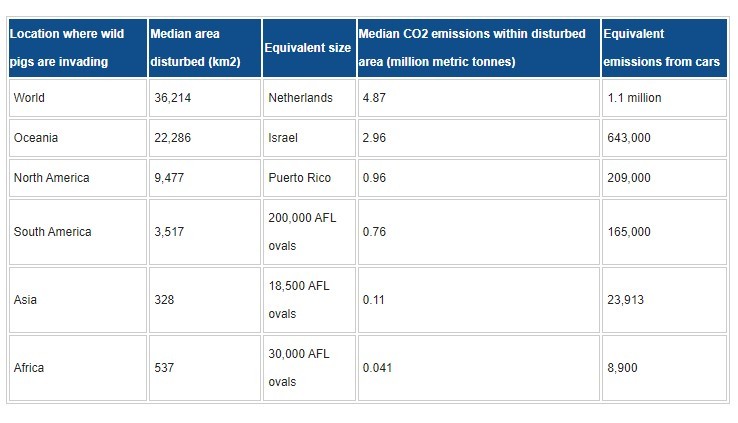