Not so long ago I made the statement that factory ammo had improved so much that the premium-grade stuff in particular was better than a lot of reloads and that the handloader was not always able to duplicate factory performance. When I tested some new Federal varmint loads that Nioa sent me, in standard weight sporting rifles, the results were mixed.
For cartridges of any calibre and specific load to impress me they need to meet stringent accuracy requirements. For varmint loads this means that 3-shot groups at 100 yards will average no more than 3/4 MoA in a standard weight barrel and no more than 1/2 MoA in a heavy-barrel varmint rifle. While I have found a few individual lots of centerfire .22 calibre varmint loads that do this, I have not come across any that would consistently give such fine accuracy. Varmint loads in the larger diameter calibres have seldom come close to equalling my accuracy requirements with exception of certain premium loadings in .243 and .308 Winchester.
However, it’s a whole different ball game when it comes to medium calibre big game cartridges from .270 to .338 calibre. For this category of powerful loads, generally I demand that the worst groups not exceed 1-1/2 MoA for five shots at 100 yards. For big bore dangerous game loads (where shots are more often measured in feet rather than yards) I am satisfied to relax my accuracy standard to 2 MoA at 100 yards. However, I insist that a truly premium-grade hunting bullet be used – that is, one that will expand to almost double its diameter, hold together and retain most of its original weight to penetrate deeply.
In recent years, factory loads (and rifles) that meet my criteria have become fairly common, so that I now often find myself using store-bought ammunition for all kinds of hunting whereas two decades ago I would never have considered doing so.
No matter how tight the groups were, there was no way that Federal’s Premium varmint ammo was going to surprise me as I’ve used a wide range of different calibres of their’s for gun tests over the years. First, let me tell you about an unusual example
– the .30-30, a cartridge seldom known for its accuracy. Last year a mate appeared with an early seconhand Marlin 336 with a Redfield Revenge 3-9×40 scope. He wanted help to sight it in, so we hied ourselves out to the range and used ammo that had accompanied the rifle – Federal Premium loaded with the Nosler 170gn Partition.
After we got the rifle zeroed 2-1/2 inches high at 100 yards, we decided to find out just how accurate that old musket might be. We got the surprise of our lives! The first three-shot group was barely .75 and the second measured a neat 1 inch. Thoughammo supply was limited, we were suffiently intrigued that we fired
a 5-shot group which further amazed us. Few people would believe how well that old levergun grouped with Federal Premium ammo. The first three shots were in 1.05 and the last two increasing it to 1.25. My mate has since told me that using Federal Premium loads with 150gn Barnes and 170gn Nosler Partition bullets that outfit seldom puts five shots over 1.5 MoA. Go figure!
I can duplicate the ballistics of this Federal .30-30 Win. load using the same cases, primers and bullets, but I’ve never been able to equal the accuracy of it, nor have I ever been able to gain the same relatively low pressure level at the same velocity. You’ll ask, why not? Probably because there’s no canister propellant available that’s identical to that used in the factory load. 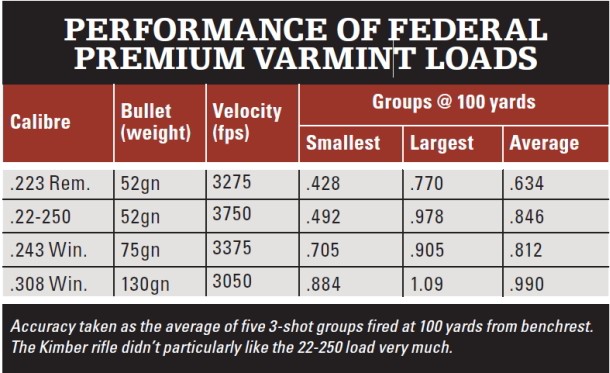