There are four things the binocular buyer should keep in mind – price, purpose, power and quality. First, and a major consideration for many, is price. During the last decade there’s been tremendous advances made in computer-designed optics, the most obvious result of which has been reduced price. The rapid development of quality binoculars in Japan and other Pacific rim countries has been a major factor in lowering prices to the buyer.

Today, a hunter can choose from a selection of excellent binoculars ranging in price from $500 to $1000. Price is no longer an infallible indicator of quality and durability, but it still affords a pretty good guideline. The hunter needs a glass that will stand up under rugged use, be fast and easy to focus and produce a bright, sharp image. There are other considerations in addition to these.

The use to which a binocular is to be put is an important factor in making a choice. If it is to be carried for hours on end in steep, rough terrain, size and weight will influence your choice. So let’s assume that the intending buyer is a mountain hunter who does a lot of walking and climbing. A lightweight binocular is the best choice for this hunter.

Next to quality, magnification is important. Some people are confused by the numbers used to designate power and field of view of any given glass. They need not be, the definitions are simple. The first number (7×35, 8×40, 10×42, etc) designates the power of that particular binocular. It means that  a 7×35 will magnify an object seven times as compared to the unaided eye. The number that comes after  the ‘x’ is simply the diameter of the objective lens in millimetres. So,a 7×35 binocular will magnify an object, bringing it seven times closer, and has an objective lens diameter of 35mm. The diameter of the objective lenses, in relation to the power produces a figure referred to as ‘Relative Brightness’. This is a number used to compare the ìexit pupilî of any optical instrument. The size of the exit pupil governs the amount of light transmitted through the binocular lenses into the viewerís eyes and how clearly the viewer can see the object he is surveiling.

This is how it works: the size of the exit pupil is found by dividing the power into the diameter of the objective lens (a 7×35 glass has a exit pupil of 5mm – so does a 6×30 and a 8×40) and that number is squared to come up with the relative brightness number of 25 (5×5=25). Because the binocular and eyes are working as parts of  a single system, this disc of light coming through the binocular passes into the eyes and the subject is shown clearly, but only if if the optical glass, lens coatings and prisms are of good quality.

There are other numbers stamped beside the ocular (eyepiece housings) which refer to the field of view that a particular glass covers at 1000 yards or metres. There are two ways to state field of view, angular and linear, but the most common is linear. For example: 397 feet at 1000 yards. This means that if you are looking at a thin object 1000 yds away, you will be able to see 198 feet on each side of it.

A word of caution here: high magnification in a binocular does not always mean high quality – nor is it always the most suitable for practical use. The best power is the one that meets the needs of the buyer – and at the same time has high quality in other areas. 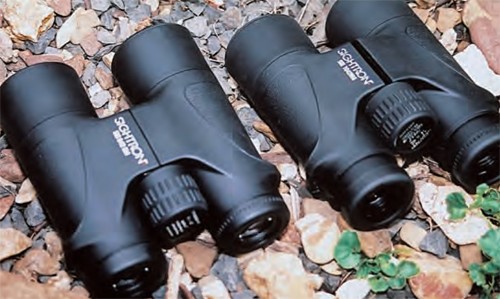 These Sightrons are a good example of affordable, high-quality binoculars coming out of Japan today.

Referring again to the mountain hunter, the power best suited to his purpose would be a minimum of 7x and a maximum of 10x. The trophy hunter is willing to hump the extra weight of a 10×42 binocular when he knows it may save him a lot of walking to get closer to his quarry  to size him up with a less powerful glass. A 10x glass is about the maximum a hunter can hold steady offhand, any more power and it has to be rested over a rock, stump or log. The woods hunter can slip a lightweight miniature 6×25 in a shirt pocket and still have the advantage of a binocular for locating game.

A 10×42 because of its higher power offers a slight edge for trophy hunting. The 8×42, however,is probably the most versatile of all glasses and cannot be recommended too highly for the first time binocular buyer.

With a binocular nothing is as important as quality. Check the exterior for workmanship and all the adjustments for focusing, eye width (interpupilary distance) and eye cups etc. Moving parts should move smoothly as you shift them back and forth.

Optical performance can assessed by knowing the meaning of three terms and there are some simple tests the intending buyer can carry out himself. Relative brightness, definition and light transmission are critical to the overall quality of a binocular and how it performs in poor light.

The diameter of the pupil of the eye changes under varying light conditions, shrinking to 2.5mm and dilating to 7mm in total darkness. On a dull day it will be about 3.5mm, about 5mm at dawn and dusk and 6.5mm under a full moon. A binocular with a relative brightness of 25 will give the hunter all the light his eyes can accommodate at both extremes  of his day in the field. But he can sacrifice a little on the relative brightness scale in favour of higher power. A 10×42 has an exit pupil of 4.2mm and will transmit as much light as he needs at dawn and dusk, more than his eyes can utilize during daytime and gives him extra power for sizing up trophy game.

High magnification is useless unless the image is sharp and clear. Sharpness and brightness are the two biggest factors in evaluating the worth of binoculars. Without the ability to resolve details, it is virtually useless. The quality of image definition is dependent  upon the reduction of the different aberrations which exist in any lens system. Hereís how to check for these aberrations.

Distortion occurs when lines that should be straight appear to bulge inward or outward due to unequal magnification in different parts of the field of vision. Look through the glass at a building or other object that has straight lines and square corners. If straight lines near the edge of the field  are badly curved, the binocular has excessive distortion.

Chromatic aberration is the most serious and most noticable fault. It is caused by the inability of the lenses to bring light waves of different length (also colour) to focus at the same point. It shows in a halo of colour around each point in the image, making it look blurred or fuzzy.
Another area of concern is light transmission. A decent binocular has multi-coated lenses, but thereís a huge difference in quality and quantity. The pitfall to watch  for here is the statement by the manufacturer that the lenses are multi-coated and not fully multi-coated. He might coat the exterior surfaces of both objective and ocular lenses and leave all the rest. Inside the body, every uncoated air-to-glass surface reduces brightness. And donít be fooled by that ruby colour tinting  on some cheap binoculars; it doesn’t do a thing to enhance brightness.

A binocular should be easy and comfortable to use. Center- focus models are my pick. Sliding, twist out and collapsible rubber eyecups all work, but twist-outs are better.

At first, youíll find it hard to pick the differences between inexpensive binoculars and those that cost a few hundred dollars more. But soon theyíll manifest themselves and  you wonít be able to ignore them. Buying a good binocular is not as complicated as some think it is. If the hunter wants a glass that will help him locate and bag his game, following this basic advice and carrying out a few simple tests will help you sift out a good binocular.

This article was first published in Sporting Shooter, August 2010.