I wasn’t at all sure what I’d encounter when I rolled up to the thousand yard range selected to conduct this course by the director of longrangehunting.com.au. With me were five other hopefuls whose shooting experience varied widely, so I had my doubts that we, as a group, could attain the required standards to be awarded our certificates on completion. As it happened, that concern was to be emphatically addressed by course’s end. First up, it’s appropriate to give a very brief CV of the chief instructor Glen. Glen is a former sniper team leader and consultant who headed up his sniping unit for the last ten years and has had twenty years of long range shooting and hunting experience. In the last half of that career, he painstakingly explored the systems and techniques that professional long-range riflemen in the military and police have used and developed and – get this – he has improved on them. To do this, he has trialled and evaluated all the external ballistics software in current use, sorted the wheat from the chaff and has established a constant dialogue with the originator of the most effective system out there. For example, when calibrating a rifle/scope combination, the accepted practice when a system is initially being tested, is to alter the drag co-efficient of the projectile based on its form factor. In practice, Glen has found it more real-world effective to alter the manufacturer’s ballistic coefficient.

This is not to say that Glen is a back room boffin because he’s out there most weeks in all terrain and weather, training his boys and himself to knock off stationery clay targets at previously unheard –of ranges. And his intention was to get us a long way towards that standard. It is important to mention here that the intent and structure of this course is squarely aimed at sport shooting only and participants are made well aware of their responsibility to the sport and fellow shooters in that regard. The instructors have no interest or intention to teach sniping techniques to the civilian market. Initially, the participants were required to outfit themselves with rifles, optics and at least 150 rounds of suitable ammunition for the practical components of the course. Amongst these were a Kimber Tactical, a Sako TRG, two Blaser Tacticals, a custom 6.5-284 hunting rig and an Enfield No 4 .303 (mine) – all were capable of consistent sub-MoA grouping.  Optics went from a Chinese knockoff of a Leupold Tactical (soon discarded), through Nightforce to high-end Schmidt and Bender variables, which are now the preferred optics for police agencies.  Chamberings ranged from the aforementioned 6.5-284 to .300 Win Mag.

COURSE OBJECTIVES.  Having a background in the Police and working closely with the military, Glen had structured the course for Cert IV Accreditation and so all participants were well aware of the objectives they had to attain. These were:
Firearms safety in the unloaded condition and on-range using live ammunition and understanding the construction and theory of range templates. 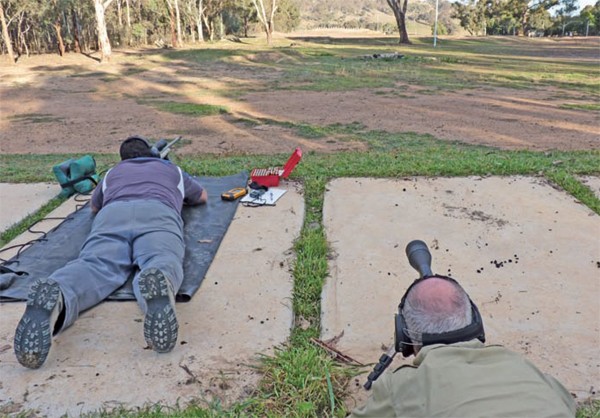 923m and Peter Bryce is smoking clay targets with his Kimber Tactical in 300WM.

Ammunition and Velocity testing. Using a sophisticated chronograph, understand the correct procedure for testing and correctly interpreting the results.

Shooting Positions. Demonstrate various shooting positions encountered in the field with and without a bipod and demonstrate accurate shooting in those positions.

Spotting projectile hits. Correct application and use of spotting scope using Milliradian reticle, correct calling of hits and misses to the shooter and correct procedure for calling second shots onto the target.

But what did all this mean to the participants? In my case, I had had a passing interest in ballistics since my time in the late seventies as an artillery officer and this part of the course fascinated me and a few others.  Others just wanted their hardware to bust clays at 800 metres and know the fast track to getting there. We were all accommodated and all achieved the required standard. For my part, my optics gave up the ghost two-thirds of the way through, but not before I could reliably hit clay targets at 723 metres and two litre milk bottles at 923 metres.

Apart from an 8.00am to 6.30 pm day (Day 2) in the classroom spent learning vital ballistics theory, the course was a good mix of theory and practical. Day one saw us getting a detailed safety briefing followed by rifle / scope setups where we calculated the actual value per click of our scopes’ turrets. Then we calibrated our ammunition velocities by taking average velocity readings with ammo at zero degrees Celsius and at 35 degrees. This gave us a powder burning rate so the software could accurately predict shot velocity according to different ammo temperatures. My .303 load using AR 2209 produced a velocity increase of 1.514fps for every degree increase in temperature incidentally. Those using factory Norma ammo came out at about 3.5fps, probably using Vihtavouri powders. That speaks volumes for the temperature stability of ADI powders. At this point, the burning rate and true muzzle velocity at zero degrees was input into the PDA’s loaded with the Lex Talus Field Firing Solution (FFS) Software. 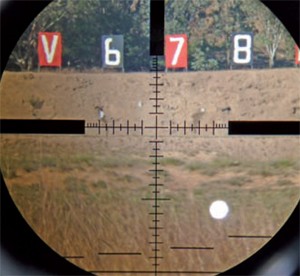 The view at 25X from a Schmidt and Bender riflescope showing clay birds and bleeding milk bottles.

Day three and four saw us confirming our 100 metre zeros and moving back to our “transonic zones” to see how our bullets performed at the supersonic extremities of their flight. This served a few purposes in that the predicted drop of our bullets was compared with the actual drop in MoA or Mils and our amended projectile Ballistic Coefficient (BC) was fed into the PDA to compensate for that variance. At this point, our rifle-scope-ammo combination was calibrated. Other data that had been already fed in included the barrel twist and twist direction (Enfield left hand twist-others right hand), height of scope above bore to the millimetre.

I learnt a lot through this process but the most important thing I came away with was that the projectile, depending upon its balance and form, may or may not become quite unstable well before it slows to the speed of sound, hence testing at the beginning of the transonic zone, around 400 to 440 metres per second. For some with a.300 Win Mag rifle with heavy bullets, they could not enter the transonic zone due to the 1,000 yard range – they needed 1,100 metres to go transonic. It had become apparent through exhaustive research by Glen that some projectiles which perform really well in the supersonic zone, eg Nosler Ballistic Tips, don’t perform so well through and beyond the transonic zone whereas some Sierra Match Kings and most Berger VLD hunting and match bullets weather the dramatic forces of that zone very well, going on to be very accurate below the speed of sound.  Glen’s interpretation of the data so far indicated to him that a bullet which had a more rearward point of balance had a better chance of weathering the transonic “blues”. A demonstration video showed a Sierra 175gn Match King from a .308 repeatedly hitting a two feet high ant mound at 1,300 metres, so this combination held up really well at a remaining velocity of around 265m/s.

My .303 was tested at 723 metres and, once calibrated, was quite capable of hitting a clay bird at that range, provided we picked the wind correctly. Incidentally, a wind change of 2m/s was sufficient to blow the shot several clay-widths away and introduced a significant elevation change also. It was here and later at 923 metres that I learnt and confirmed my ability to read mirage effectively for gentle, flicking and exasperating winds. It is in such a situation that the value of having a spotter is driven home.

If the spotter’s telescope has a mil dot reticle just like the shooter’s riflescope, then giving corrections for hold-off are infinitely easier. On the occasions that I spotted for Glen’s assistant Mark Digby and he reciprocated, we developed a really nice system where we made large adjustments using Milrads and small ones using widths and heights of clay birds or milk bottles.

At one point, Mark was spotting me on a milk bottle at 923 metres and the directions went something like, “ Good elevation, come half a bottle right – bang – great you’ve nailed it top two-thirds. Now try and empty the water out of it by hitting it bottom quarter”. A couple of wind changes later, I did empty that bottle by hitting it exactly where he said I should. Obviously, the depleted energy of the projectile at long range meant that the bottle did not blow up – rather it punched neat holes, allowing shooters to walk their bullets down the target when they could.

At this point, it is germane to mention the other information that is fed into the palm pilot/PDA apart from the initial calibration information for the rifle/scope/ammo. When the shooter arrives at the firing point, it is essential to input the environmental conditions at the time. These are: Accurate range to target. Rationale – obvious.

True bearing from shooter to target i.e. magnetic bearing plus or minus current magnetic variation. Rationale – due to varying speeds of earth’s rotation at different points on surface – i.e. shooter to target – there is a correction necessary to be made at ranges beyond 500 metres.

Station pressure – this is the air pressure taken at the firing point. It is lower than barometric pressure depending upon your height above sea level and is attained with a hand held portable weather station of the type made by Kestrel. Rationale – bullet drops less in less air pressure.

Wind speed and direction – either estimated or via Kestrel. Rationale – obvious.

Ammunition temperature, hopefully same as ambient in shade – via Kestrel. Rationale – the higher the ammo temperature the flatter the trajectory due to increased velocity.

Once these factors have been fed into the FFS software, the CALCULATE button is pressed and the firing solution is given in two forms:
Number of turns applied on elevation turret from zero with windage turret allowance also and MoA allowance or Miliradian allowance depending on how scope is set up.

Then the shooter fires his first shot and, if all these factors have been correctly input in addition to correct initial system calibration, then a first round hit is a more than even chance at ranges out to 1,000 metres and beyond. With the training provided at longrangehunting.com.au, a near miss with the first shot willgenerally result in a second round hit with an accurately called correction by the spotter. This is highly dependent on the accuracy and consistency of the rifle and its ammo.

Hunting Applications. On many occasions throughout this course the participants were reminded that the application of this knowledge in a hunting scenario had serious animal welfare implications. The course equipped the shooter to go away to a location, apply an appropriate danger area template for their chosen property or rifle range, and practice on non-living targets before any attempt at shorter long range hunting scenarios were entertained. Many of the participants had invested serious money in their gear (something of which I could not be accused) and were more interested in super plinking rather than serious hunting.

The Wrap-up. This course was the most beneficial and enjoyable staff development activity with which I have ever been involved. This was due to several factors, not least of which was my intense interest in the area. The instruction was highly organised, well-timed, well-resourced, amazingly well-researched and knowledgeable, tolerant and friendly. Glen and Mark proved to be two of nature’s gentlemen who are happy to impart valuable knowledge and boundless experience to help others take quantum leaps in their shooting understanding and performance.  Glen can be contacted through his website: www.longrangehunting.com.au

This article was first published in Guns Australia, October/December 2010.