Project number one began in early March 2008 when I purchased on old clapped out Savage No 4 Mk 1* SMLE 303/25 from Keith Boyle at Queensland Shooters Supplies for the princely sum of $50. All the appropriate paper work was completed and the rifle arrived, but not in 303/25 instead 303/243 and talk about rough. I thought ‘what a piece of junk’, but that ugly duckling has turned into the proverbial swan. After months of cleaning up the action and woodwork which involved plenty of wet and dry and open coat sandpaper as well as sore hands from this work the rifle was ready to be sent off to have the barrel fitted.

This is where problem number one arose. Where do I get a 250 Tiapan reamer from? After numerous phone calls I came to the conclusion that this was not going to be easy as no one I spoke to had heard of the old cartridge, let alone had a reamer. After much searching on the internet I found a similar cartridge, the 303/25 Epps, a cartridge designed by Ellwood Epps in Canada around the same time as the Tiapan was invented. Again no reamer was readily available. After looking through my collection of shooting magazines I finally came up with a name. Dave Manson Precision Reamers in the good ol’ U.S. of A. Manson reamers (located at 8200 Embury Road, Grand Blanc MI. 48439 phone 00111- 810-953-0735 or email mansonreamers.com) proved to be most helpful in my search. Not only did Dave have the correct Epps’ reamer with the required 35 degree shoulder he emailed the schematics saying any changes I would like to make he could do. More research and a phone call to Dave with the changes (shorten the neck from .311 to .257 and lengthen the body to shoulder length from 1.736 to 1.8 inches and overall case length 2.158 inches). Three months later I finally had my reamer for the cost of $230 AUD delivered to my door. Many thanks go to Dave for his help, patience and understanding of my needs. ABOVE LEFT: .302-25 Epps Improved on the left compared with the original Super 87gn factory load. Note the neck shortened to the bullet’s diameter (.257”) and shoulder correspondingly blown forward with more parallel walls for greatly increased in powder capacity.

Now off to get a barrel. Tony and Veronica Argent at MAB did the required work, fitting of the barrel and head spacing to .62 thou (tighter than the usual .64 thou SAMMI specs) and fitting a scope mount. This was done to tighten up the action in the interest of accuracy. This little gem of wisdom was passed on to me from my father (now deceased) who was an armourer in the RAAF for 21 years and used to trick up the SMLE for inter-service shoots in the good old days. Four months later and the rifle was back, the whole lot had been beautifully re-blued and with the woodwork completed and, reassembled, it looked a treat. To top the outfit off an Arctic Fox 3-9 illuminated reticule was obtained from Brian at Snow Fox Imports (ph 08 9248 9235). No one in my area had the scope I wanted so I thought ‘stuff this! I’ll just ring Brian direct’. Two days later the scope arrived and I was ready to shoot, sort of. No loaded rounds to use.

Problem solved, load up some .303/25 cases and fire form, but what load data. Capacity was close to the .257 Roberts so start there. A forming load was arrived at 36 grains ADI 2208 with a 90 grain Sierra BTHP. This is the OCTOBER 2010 sporting shooter 79 starting load for the same weight in the Roberts. Down to the mate’s farm to try it along with some original Super .303/25 rounds. The forming load proved extremely mild in my rifle and turned up 2,700 fps over the chrony. The old Supers on the other hand only just made 2,200 fps. During the fire forming of 100 Remington cases I only lost two cases due to split shoulders all others formed beautifully. Beauty, new cases to try, home we go ready to load but – woops – no dies. Easy fixed – on the phone again, but this time to Patrick at Lee precision. No problems. Send over five fired cases and all the dies will be made for a cost of $350 AUD. Well I had to have them.

In the meantime another .303/25 came up for sale. Project number 2, a sporterised M17 Enfield complete with 4 x 81 Pecar Command-Post scope for $250. Again the rigmarole of paperwork and the rifle was mine. The stock was not to my liking so the barrelled action was sent to Geoff Slee to have one of his custom thumbhole stocks made up complete with pillar and glass bedding. I asked Geoff to semi-finish the stock as I wanted the pleasure of finishing it. This was done using my height and weight (197cm and 105kg) so the stock would fit me properly. As can be seen from the photo the stock came up quite well.

I decided to spend the extra money and get a really top-notch you-beaut rifle built on the M17 action and after much reading and many phone calls, I decided to give Shane Clancy of Clancy’s Gunsmithing in Narrandera the job. Shane was most helpful. A Lilja match grade stainless 24 inch No 3 profile barrel was fitted (to match the existing barrel so no stock alterations were needed) and the feed rails modified to handle the new cartridge, the bolt face was trued up and the firing pin protrusion altered accordingly. Sure the job took another six months but the end result is a joy to behold. Thanks Shane. The rifle not only looks good but feeds the new round like silk. The scope chosen for this rifle was another Arctic Fox. On the phone again to Brian and two days later a beautiful 3-12×40 illuminated mil-dot scope with target turrets and side parallax arrived on my doorstep. By the time I got the rifle back from Shane the dies had arrived, so it was now time to get down to the serious job of load development. The next problem to arise was the complete lack of information on reloading data for my new toys. To the rescue came Sporting Shooter and Nick Harvey’s’ article on Wayne Blackall’s load from a disk. A quick search of the internet (a great little tool for us shooters) and I found the disk contained the data I needed. The disk was ordered and promptly arrived.

The fun begins. Consulting the data on the disk I settled on a load of Hodgdon 4831. After phoning ADI (now Thales) I was informed that H4831 was 2213SC under a different name, I thought ‘bewdy’. As both rifles had been throated to seat the Barnes TSX seating depth was never going to be an issue. The Load From a Disk program showed that 57.1gn AR2213SC would give the 100gn Speer 3408fps within acceptable pressure parameters for the M17 front-locking action while 52gn AR2209 would get me 3400fps from a 90gn Sierra HPBT at an appropriate safe pressure for the No4 rear-locker. Overall length for the M17 100gn load is 3.00′ with a seating depth of .275 in. For the No 4 Savage 90 gn load, 52 grn overall length was 2.9′. The reason for the different projectiles is that I don’t want to inadvertently slip an M17 load into the No4 as this probably would not have a healthy outcome. 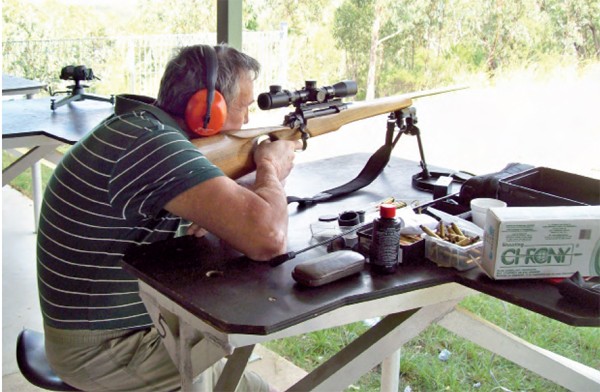 Author testing loads – he used Wayne Blackall’s Load-From-ADisk program for load development and it was spot-on when compared with real-world results.

Down to the range to see how these loads went. Both loads showed no signs of excess pressure in their respective rifles, bolt handles were easy to lift and there  were no signs of the striker-hole cratering or primer flattening. The M17 chronographed 3414 fps average for five shots and the Savage No 4 averaged around 3380 fps for five shots. Groups for both rifles averaged around one inch for three shots which is about the best these 52 year old eyes and shaky hands can hold. Sighted 1.5′ high at 100 yards the 100 grainer rises 1.7′ at 150 yd, zero at 230 yd and not even 4′ low at 300. I won’t bore you with figures but let’s just say at 500 yd it still hits harder than the .243 at 300. For the velocity freaks, the Hornady 75 gn V-Max can be sent down the range at up to 3,800 fps to shoot flatter than the proverbial manure carter’s hat. So far some of the cases have been reloaded three times. There has been no need to trim the cases and they have only been loaded using the Lee Collet die. All projectiles are crimped using the factory crimp die. At this stage I don’t think I will have to full length size until about load 8 to 10. I put this down to the design of the case and the closeness of the head spacing.

Testing on Game. Late one afternoon in Vulcan State Forest, my mate Chris and I set off to see what we could find. A short ten-minute walk later and we saw two fallow does at around 250 yards. Both were feeding in a nice open sunny area and had not seen us. Chris said, ‘What do you reckon?’ I was not after a trophy and I had run out of venison in my freezer so I said they would do nicely. I sat down and extended the bipod and chambered a round. I lined the smaller one up just behind the shoulder and touched off. I knew the shot was true so swung onto the second one and hit her square in the shoulder and down she went too. Chris said he had never seen two deer go down so quick before and he has been shooting them for years. We went over to check them out and neither had moved off the spot where they were shot.

The devastation caused by those 100 gn Speers was nothing short of amazing. On the larger deer the bullet smashed the near-side shoulder, tore the heart and lungs to shreds, broke four ribs on the off-side and continued on to smash the off-side shoulder. No trace of the bullet was found in either animal and the bullets did not exit. The damage was so bad I was not able to use much of the front half of the animals so maybe next time a neck shot will be in order.

Conclusion – the cartridge did what I had designed it to do, be a highly effective slayer of game. As this project was so successful, my next ones will involve converting a SMLE No 1 Mk3* to 444 Marlin and a Savage No 4 Mk1/3 to 303 Epps.

*Note: the writer is not responsible for others using the loading data contained in this article and advises that this cartridge is a wildcat and all loads must be developed with caution.

This article was first published in Sporting Shooter, October 2010.