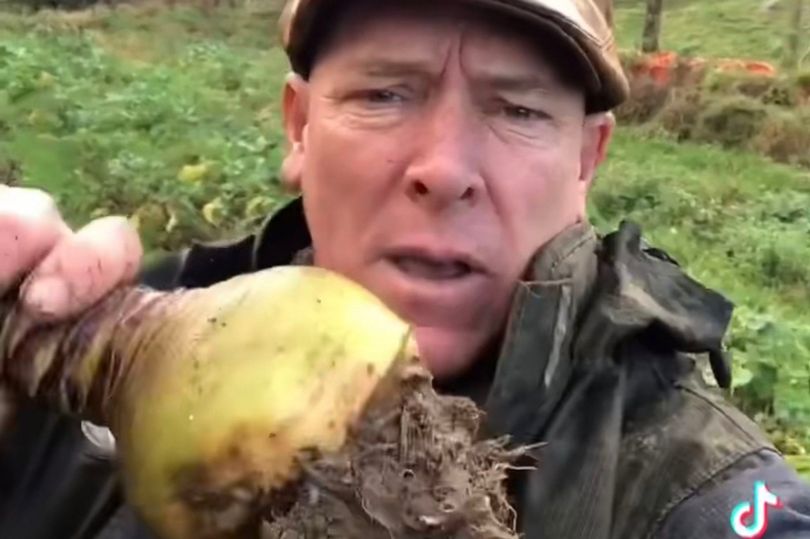 Clutching a turnip in a TikTok video, Gareth explained that vegetables were often fertilised with livestock manure. After complaints he was found guilty of ‘harassment and bullying’ – TikTok

Farmer Gareth from Conwy discovered he had been blocked from TikTok and his 15000 followers after vegan campaign groups put together a powerful mass reporting of his account.

This ban highlights the current state of social media and how the platforms are forcing their ideologies upon users.

The Daily Post reported Tiktok adjudged him guilty of “harassment and bullying” after he brandished a turnip in a video, explaining how vegetables were often fertilised by livestock manure. Within 24 hours the ban had been rescinded following an appeal.

That’s the trouble with today’s youngsters, so easily offended!

After his latest run-in with TikTok, Gareth was unrepentant, having become accustomed to being targeted by what he called “militant vegans”. “This is the second time I’ve been blocked by them and I’m not that bothered,” he said.

“I’m still on Facebook, Twitter and Instagram. All I did was have a bit of fun. To be honest, I’ve actually been quite well behaved recently.”

Gareth, who has one of the biggest social media followings in British farming, landed himself in hot water when he got creative with a TikTok video of a vegan. Clutching a turnip, Gareth spliced in his own clip, saying, “I’ll tell you why I’m not a vegan and never will be – because I’m a farmer.”

News of his latest temporary TikTok ban caused dismay amongst his (mostly pro-farming) supporters. One quipped: “That’s the trouble with today’s youngsters, so easily offended!”

In all seriousness his concerns that the algorithms restricting free speech are genuine.

“We have to question the impact on freedom of speech when pressure groups can get people banned from online platforms,” he said.

“People are free to make up their own mind about livestock farming. These groups will keep attacking us and all we can do is to continue what we have been doing for centuries, which is producing food for the nation. And perhaps have a little bit of fun as well.”

Hunters and shooters are experiencing the same issues, with their groups with zero violations being closed at the push of a button. In addition, organised anti-everything groups are mass reporting and fake posting on pages to get 50,000 plus member groups closed for good with no review process to save them.