I moved to Canada in 2011 and for the three years following I hopped between Central West New South Wales, working in mining, and Northern Saskatchewan, working as a ranch hand. I had enjoyed ‘roo shooting and pigging at home but really got into hunting when I made friends with some Saskatchewan Hunting Outfitters. I worked for Timberclaw Outfitters at Goodsoil and Buck Paradise Outfitters in Paradise Hill  – I really enjoyed meeting the hunters from the States and seeing all of the impressive trophies they harvested- giant whitetails deer, flocks of waterfowl and big black bears.

I lived in Pierceland Saskatchewan for a year and spent my days off quadding in the woods, fishing, goose hunting and partying with some of the best people you could hope to meet.

My first whitetail hunt was with my good friend Kost Fedyk. We picked a couple of good spots for baits and loaded them up with hay, salt blocks and oats. The baits were getting hit hard by moose and does but there were also two nice looking bucks coming right into our bait. On November 9th, 2014, we quadded into the woods, ready to sit and wait in the -15 cold for a buck to walk in.

An hour after we arrived the bait was populated with does and a fawn…then the buck walked in. We heard the rustling in the bushes and his slow steady steps before he came into view. I was focused on his wide, heavy antlers before I noticed how big bodied the old buck was. He ate at the bait for a while and then turned to chase a doe. I couldn’t get a good shot broadside and he started walking back into the trees. Buck fever was starting to set in and I was worried I had missed my opportunity, then I saw a chance for a kill shot between a fork in a tree and decided to take it.

I squeezed the trigger and he dropped; I shot him in the heart with a classic deer-hunting rifle par excellence – a Savage Model 99 in .308. I was still shaking with excitement when we got to him and began to drag him out of the bushes to the quad. Holy smokes, was he ever heavy! When we got back to the ranch we skinned, butchered and scored him.

He came in at 158 points. I love my first whitetail buck and can’t wait for bear season to roll around! 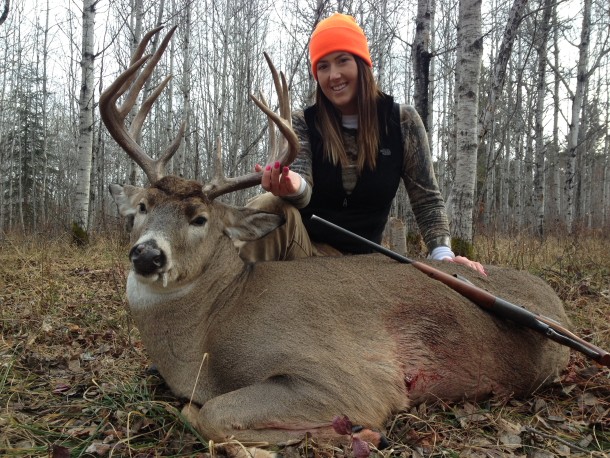