History shows that once a new factory cartridge of the same calibre with improved ballistics has been introduced, the skids are greased under the old one which will begin a steady slide in the oldsters popularity and eventually, into obscurity. A good example of this is what happened to the 7x57mm Mauser when the 7mm-08 appeared in 1980. Factory loads for the 7×57 were being loaded to moderate chamber pressures to drive a 140gn bullet at 2660fps in deference to all the old rifles still in use. Then suddenly in 1980 the 7mm-08 appeared on the scene, lofting out a 140gn bullet at 2860fps. Being based on the .308 case necked down, it fitted neatly into a short action, whereas the 7×57 needed a standard length action. The 7mm-08 was developed for metallic silhouette shooting and according to tests carried out by Remington, at 500 yards it showed an edge of 238 fps and 750 lbs of energy over the .308. So, the 7mm-08 drove the last nail in the coffin of the 7×57 which had been barely hanging on by the skin of its teeth.
In factory ammo at least, then, the 7mm-08 is faster and flatter shooting. It fits modern concepts of what a hunting cartridge should be better than does the 7×57. Ideally chambered in lightweight, short action rifles, the 7mm-08 combined mild recoil and superb accuracy with adequate killing power for medium-size game. Early summations that the 7mm-08 could be loaded with bullets heavier than 140 grains making it suitable for heavier game such as wapiti may have fired up the hoi polloi, but
I was unconvinced and still am. In my book, the 7mm-08 falls far short of what I would consider to be an adequate calibre for wapiti, and I’d draw the line at red stag and then, only within the 200 yard mark. Me, I still prefer the old 7×57, although I’ll admit my preference may be strongly influenced by nostalgia. 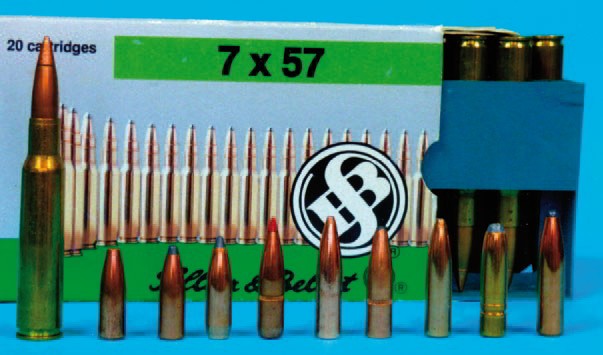 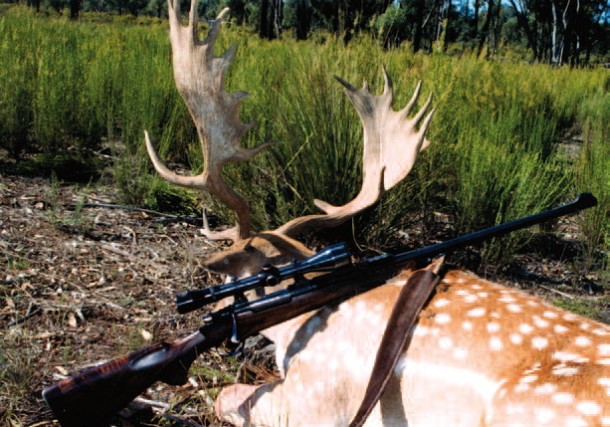 I don’t see any advantage to using a bullet lighter than 120gn in the 7×57 and much prefer the 130gn Speer. Both Re-15 and AR2208 work well with light bullets but the best accuracy was obtained using the ADI powder. Tests showed W-760 is versatile with bullets up to 140 grains, but AR2209 was good with 140gn & 150gn bullets, but with heavy charges it is quite heavily compressed – something some handloaders perfer to avoid. An excellent load which performs well on medium size deer is 53gn of Re-19 driving the 140gn Sierra at 2930fps. One grain less of Re-19 launches the 50gn
PSP Core-Lokt at 2885fps. But both are heavily compressed charges. 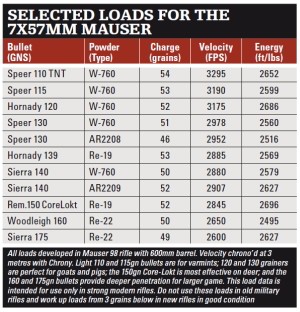 The criterion of what any 7mm Magnum will do is with a nicely pointed 160gn spitzer bullet, and that’s as heavy as I want to go in the 7×57. While 2660fps is achievable using 48gn of AR2209, 59gn of Re-19 adds another 40fps, and there’s certainly no flies on 49gn of VV N 160 delivers a hefty 2735fps. My testing with the 175gn Sierra was limited to two powders – 45gn of AR2209 and 49gn of Re-22 both got it out of the muzzle at 2600fps with 2627 ft/lb of energy. This is an exceptionally fine cartridge when deep penetration with heavy bullets is required, and ranges are moderate, yet the recoil developed in sporter-weight rifle is not punishing. Loaded with heavy powder charges it can equal the velocity of the 7mm-08 and even approach that of the .270 Winchester. The difference in bullet diameter of the two is approximately .006”, which would not have a great effect on sectional density of a given weight of bullet. At this late date it has become perfectly obvious why the 7×57 is not as popular as either cartridge, but the excellent, dependable performance of this oldtimer is certainly an unimpeachable recommendation for owning one.