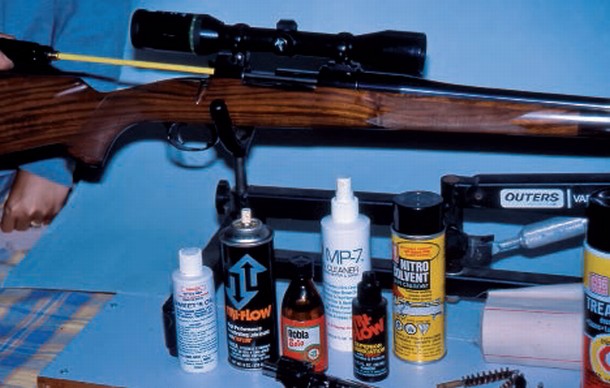 Above:  A one-piece cleaning rod is being used with the rifle securely held in an Outers rifle cradle while it’s being given a thorough cleaning.

There is a drawback to storing guns in this position, since gravity makes any oil in the gun tend to travel downward. For this reason it is wise to avoid using thin oils which drain downward into the action to clog it up, often leaving the muzzle of the barrel with little protection from damp air and changing humidity within a steel safe. From the action, thin oils work down into the stock, particularly with leverguns, often discolouring the wood and making it soft.
Because of this, the best gun oils for rifles that are to be stored for long periods are high-quality gun greases such as Rig and Birchwood Casey SNO Universal Gun Grease which spread thin and filmlike and will retain their viscosity. Both bore and exterior metal surfaces should receive a liberal coating of the same gun grease.
The basic procedure for caring for a gun after use starts with making sure it is dry. If it’s been carried in rain or damp conditions, immediately wipe it all over with a dry cloth and then expose it to some form of mild heat to dry it out. Once the gun is completely dry, a dry patch should be run through the bore to remove any powder particles. Then, depending on how many times the gun has been fired and how badly it is prone to metal foul, it is best to begin the cleaning by running a bronze brush dipped in a good metal solvent like Butch’s Bore Shine or Hoppes Benchrest No. 9 through the bore. Allow the rifle to stand long enough for the solvent to do its work, before working a saturated patch back and forth through the bore. Check the patch for any sign of blue colour which indicates copper residue. Once a patch comes out with no blue showing, run through a dry patch and follow with a patch moistened with a good lubricant like M-Pro 7 or Butch’s Gun Oil to proceed with the cleaning and oiling. Suitable patches can be cut from a roll of flannel or be bought ready-cut in the proper size to fit the bore, like Pro-Shot.
Special care should be taken when high strength aggressive copper solvents like Roblo Solo or Sweets Solvent are used, not to leave them in the bore too long. Once the bore has had all the fouling dissolved, it’s a good idea to run a patch dipped in  thinners through the bore to remove the residue of the solvent and prevent it pitting the steel of the bore. Once the bore is cleaned and dry, a patch should be lightly oiled with a preservative gun oil like Sweets Oil or Ballistol. Do not saturate the patch with oil or else it will run down into the action.
Whenever possible with rifles, cleaning and oiling should be done from the receiver end of the barrel. The friction of cleaning rods rubbing against the sides of the rifling and banging on the crown while cleaning it from the muzzle end, has taken the edge off many a musket’s accuracy. 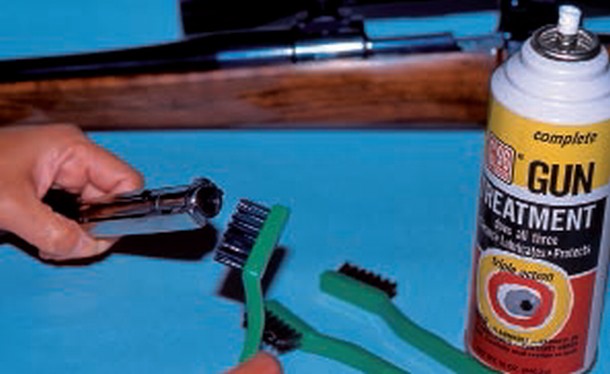 Above: To ensure troublefree functioning, it’s wise to keep the bolt face and chamber of your rifle clean and free from brass particles.

The  best cleaning rods for rifles are all one-piece, preferably made of polished steel and not plastic coated, so their surfaces won’t pick up grit and dirt particles.
A clean piece of cloth coated with the same type of oil or grease is then used to wipe all the outside metal surfaces of the gun. Detachable magazines also repay coating them with a thin film of oil. If you want your rifle’s bolt to work as smooth as silk, simply smear a thin film of TM Ultra Bolt Grease on it. A cheaper alternative is Nulon L90 Xtreme Pressure Anti-Seize Lubricant on the bolt body and lugs . L90 offers extremely high film strength and adhesion , doesn’t dry out and works in extremes of temperature. A 125 ml tube will last you a lifetime.
Care should be taken to see that the optics of scope sights are never touched with an oily cloth, though the scope tube and mount can be wiped over. The soft lens tissue used for camera lenses can be used to wipe scope lenses. The best treatment for any hunting optic – scopes, binoculars, spotting scopes shooting glasses and rangefinders, is Birchwood Casey VizWiz Lens Cleaner. After any dust or dirt is carefully brushed off, VizWiz is sprayed directly onto the lens surface. Afterwhich the lens is wiped dry with a clean soft cloth or dry tissue. VizWiz is not only a lens cleaner but it does not fog up or attract dust and also removes fingerprints.
To protect wood gunstocks during storage all that  is necessary is to wipe it over with four or five drops of Birchwood Casey Tru Oil in the palm of the hand, spread it out, and rub the entire stock’s surface with hard strokes. Tru Oil eliminates any shallow scratches and tends to bring out the original finish of the wood.
In going over the stock with Tru Oil, care should be used that it doesn’t get on the metal, as Tru Oil on metal tends to gum.
With the gun completely cleaned and filmed all over with oil, the bolt (bolt actions) should be replaced and closed. The firing pin should be released. No gun should be stored with the action cocked – as a safety precaution, and to prevent strain on the firing pin spring.
The gun is then stored by placing it in position without letting any ungreased fingers touch the metal. Handle it with greased fingers and by the stock.
A gun cared for in this way will remain rust and corrosion free (assuming a good quality gun grease was used) until needed again. In instances where the gun is taken down to show to friends, it is wise to oil the exterior again before returning it to storage. The salt in some peoples perspiration is very corrosive and any fingerprints left on the metal will rust. Many gun owners keep an oiled or silicone-treated cloth handy in their gun safe for just this purpose. Once the gun has been handled, they immediately wipe it before replacing it in the rack.
Today there are a whole raft of good cleaning solvents and lubricants on the market, more than ever before. There are several well known brand names to choose from in addition to those mentioned above, which were used as examples. Guns cleaned and stored according to the instructions on the package will be safe in storage.
Field care of firearms in camp and while hunting is basically a continuation of the method used for storage. Obviously, the biggest hazards in the field are rain, snow, fog and moisture from condensation accruing from rapid and extreme changes in temperature. Much of the best big game hunting is carried out in extreme or adverse climatic conditions where the hunter must expose his rifle.
For hunting on foot in rain or snow, the rifle’s best protection by far is a light, overall coating of gun grease, applied as for gun storage by wiping it on with a greased cloth. This will generally keep all moisture off the metal, even in the rain.
The bore, however, should not be coated. Instead at the beginning of the day’s hunt, the bore should be wiped clean of all oil or grease, as an excess of lubricant in the bore can cause pressures to jump when the rifle is shot and change the rifle’s impact point.
The muzzle can be kept free of rain or snow by simply placing a strip of plastic tape over it. A piece of tape about 26mm long will do the trick. And there’s no need to bother yanking it off when a shot presents itself as the bullet will go through it without being deflected.
Riflescopes without an hydrophobic exterior lens coating should be fitted with end covers to prevent the lenses from fogging our getting wet, but are a handicap if fast shooting is called for. When carrying out a stalk, a good method is to carry the scope rifle muzzle downward with the scopes eyepiece high under the armpit. This prevents rain getting on the lenses and the objective lens below is protected by gravity and being recessed in the end of the tube. 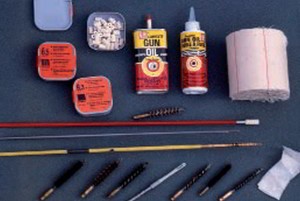 Above: You can use a roll of cleaning flannel or GFC Tampons that are calibre specific. There’s a wide choice of space-age metal solvents, gun oils, gun greases and preservatives available today to keep your rifle in tip-top condition.

In icy conditions a firearm should never be brought into a warm tent or hut because the sudden transformation from being brought suddenly from a sub zero temperature to warm one causes condensation to form on the exterior of the rifle as well as inside the scope tube making it fog up. A good way of preventing this is to leave all firearms in a soft case outside on a verandah or in an unheated tent, and take them out each morning for the day’s hunt. The firearms will maintain the temperature of the outside air so that condensation does not form.
Also, in extreme cold, such as the Arctic or far northern countries in winter, any grease left inside a rifle’s bolt will cause it to freeze up and stop the firing pin from functioning. It is imperative to dismantle and clean the firing mechanism in the bolt prior to going on a hunt and relube it with a space age grease that won’t freeze up.
Finally, a suitable gun cleaning kit is a necessity on a hunt. The best kit is small and light like the Otis which comes in a small round tin with a pull-through. A metal weight attached to a strong cord is dropped through the bore and a dry or lightly oiled patch hauled through the rifle bore.
Remember, any centrefire rifle that  has been fired or carried all day in wet conditions, should be cleaned, dried and oiled as soon as you return to camp. All it takes is a little care and time, whether at home or in the field to assure your gun remains in good working condition and will function flawlessly whenever a shot at a game animal presents itself.