Today’s shooters have a phenomenal selection of scopes to choose from. Optical quality varies from mediocre to excellent depending largely upon the price. When you are shooting at a sharply defined black bullseye against a white background at a known range in bright sunlight, even an El Cheapo scope may look good.

A scope, even inexpensive models such as the average weekend shooter usually chooses for his first glass sight, offers a brighter, sharper, more clearly defined target image than open sights. But when the target is a rabbit’s head sticking up out of the grass at 50 metres, in wavering shadows, a cheap optic won’t enable you to see clearly enough to place your shot.

It’s not unusual for a dedicated small game hunter to put a high-quality scope on his rimfire outfit. Anyone who hunts with say, a CZ ZKM 455, a Remington 547 Custom Classic, Anschutz 1710 D, or Sako Quad, is not going to be satisfied with a $90 glass. Yet a cheap optic is an excellent choice for the person who does not take his rabbit hunting seriously – the fellow whose rifle is more likely to cost $150 than $800 to $1000. And both kinds of shooters are well served by their equipment, for today’s reasonably priced .22 rifles using inexpensive scopes will deliver more accuracy than is required for any normal hunting, while the expensive outfits add to the sense of well being some demanding marksmen need to enhance their tackdriving accuracy.

Back in the early 1950s scopes were uncommon on any kind of rifle, rare indeed in the bush. The first .22 scopes to show up were built on smallish .75-inch 0r .875 -inch tubes with straight objectives. They came with stamped steel strap rings contoured to fit the side of a round receiver.It was difficult for the average gunsmith to drill base-mounting holes in the proper locations, and shimming bases and/or rings was often necessary. Since first plane reticles often moved out of the scope’s optical centre when zeroing in, it was common to have the crosswires way out of the centre of the field – up and down, in one corner or the other.

Brightness was impaired because lenses were coated only on the exterior surfaces. In poor light it was difficult to distinguish a rabbit at 25 metres, let alone see well enough to take aim at it. Field of view averaged about 20 feet with the 4x models, a bit less with the 6x, and eye relief ran about 2-1/4 inches, making them slow to aim with. The problems were many, but the scope’s advantages were so obvious that shooters of that period put up with them. 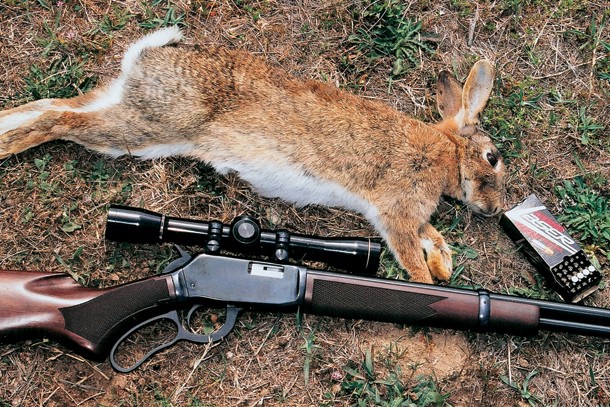 The Leupold 4x Compact on this Winchester 9422 Legacy is a perfect match for a rimfire that will be used mainly for shooting offhand and from the sit.

A decade after the end of World War II Japanese-made centrefire scopes and Weaver B4 and B6 rimfire scopes with internal adjustments came on the scene. Before long, those who wanted a bit more versatility on a rimfire hunting rifle, could choose a variable power model which offered quick changes in magnification and field to adapt to specific shooting needs. Weaver’s V22 could be set from 3x to 6x with a field of 31 to 16 feet, and Bushnell’s Custom 22 was a fine 3-7x model.

Rimfire hunters who wanted more light transmission were buying Redfield’s Traditional 4 x 3/4 and Weatherby’s 4x Mark XXII, both of which had enlarged objective lenses to transmit more light. This is a valuable feature in a scope to be used in early morning and late evening.

Since large lenses, bigger tubes etc are more costly than smaller ones, most scope manufacturers used smaller sizes for rimfire rifle scopes. They were not as efficient optically as larger models, but they could be sold for a fraction of the bigger scope’s cost. This allowed hunters who were not so fussy on the subject, to obtain satisfactory scopes at very reasonable cost.

Despite early problems, a scope made it possible to zero the rifle eassily and accurately, and thus place shots far more precisely than could be done with iron sights.

And they doubled what might be a hunter’s sure killing range and made it possible to hunt even under poor light conditions.

More discriminating shooters bought the highest-quality rimfire scopes – the Pecar 2-3/4 and 4×36 Junior had a 26mm tube and fully-coated lenses. The 4×36 in particular boasted a 9mm exit pupil which permitted more rapid aim, since the eye does not have to be as precisely lined-up with the centre of the scope in order to see the full field of view and the reticle.

Many high-quality rimfire rifles match the weight and proportions of comparable big-game rifles. These guns all cry out for 1-inch diameter scopes which offer optics of quality commensurate with that of their rifles.

Shooters wanting a scope with better optics, started looking at the dozens of makes and models of the so-called big- game scopes that were available. These differed from the majority of rimfire models not only in price (more expensive) and size (being built on 1-inch tubes with enlarged ocular and objective lenses to increase field and light transmission), but also in mechanical design. They are capable of withstanding rougher handling into the bargain. 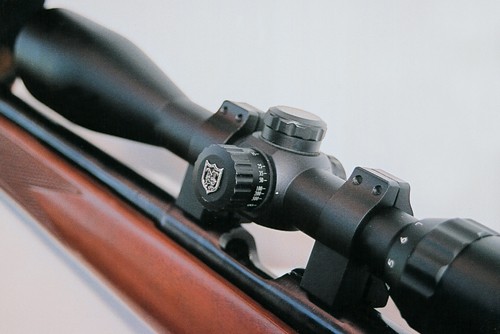 Nikko Stirling 3-9x Nighteater scope has a third turret which makes provision for correcting parallax error on the .17 HMR which sees use out to 200 meters.

Mounts that caused problems with early rimfire scopes had been eliminated years previously with the introduction of male dovetails made as an integral part of the rifle’s receiver which provided a simple, accurate and strong method of attaching a pair of ring mounts to the gun.

Because he does much of his shooting at ranges from 25 to 50yd., the rimfire rifleman may be plagued by positive parallax, in which the image seen in the scope moves side to side or up and down in the same direction when the shooter’s eye moves. Scopes that are intended for use on a centrefire rifle are adjusted to have no parallax at 100 to 150 yd; rimfire scopes are normally adjusted to be parallax free at 50 to 75yd. Parallax, however, is not all that much of a problem with scopes of 4x and 6x which have adequate power for rimfire rifles in .22LR, .22 Magnum and .17 HMR. Some companies offer 3-9x AO optics for rimfire rifles, and there’s little need for more magnification atop any rimfire.

But owners of heavy-barreled .22 Magnum and .17 HMR varmint rifles often attach high-range variables in the 4-12x and 4-16x and 6-24x bracket for sniping out to 200yd. These scopes have become extremely popular now since rotating a ring located on the objective bell eliminates parallax.

Unless one has an extremely accurate rifle and is interested in reaching out to the limit of rimfire ranges, most shooters who walk about seeking targets of opportunity will be well-served with a rimfire fitted with a 2-7x 0r 3-9x scope.

During the past 30 years there’s been a tendency on the part of scope manufacturers to increase the size and weight of their products to improve performance, resulting, in many cases, in waterpipe-sized tubes with enormous objective bells – fine for heavy-barreled varmint/target rifles, but unhandy in the field, and as far as use on rimfire rifles is concerned!

Firms like Leupold, Burris, Bushnell and Weaver all make rimfire scopes and compacts that fill the bill for size and weight where full-sized rimfires are concerned. Bushnell’s Banner line of 1-inch tubed scopes offers quality at a reasonable price and are light enough to fit on nearly any standard-sized rimfire rifle. 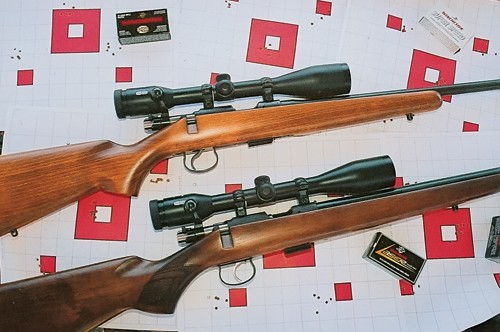 This pair of CZ rimfires are well served with matching 6×42 Meopta Artemis scopes. No more magnification is needed.

Some lesser-priced fixed-power and variable-power scopes will prove reliable on rimfire rifles, so picking the very best scope for your style of hunting isn’t as simple as buying only one brand. Keep it in mind that adjustable-objective scopes can turn many ordinary .22 rifles into tack drivers. Most .22 scopes are set to be parallax-free at short ranges of 50 to 75yd, but that virtually guarantees they’ll show parallax at any other range – and in a .22 used for head-shooting rabbits a little parallax can result in a lot of misses.

Most small game hunters prefer to hunt with plain old fixed- power scopes of no more than 6x, and often only 4x. Why? Because they like to feel that they’re hunting, not sniping!

This article was first published in Sporting Shooter, July 2011.