Proper trigger control is not possible unless your trigger has been properly adjusted to give a crisp, totally inert let-off. A trigger that creeps and jerks is going to disrupt your aim whether you are shooting at game or targets. A good trigger allows the shooter to control the moment of firing so that the bullet leaves the muzzle in that instant when your aim looks right and the rifle is holding steady.

The shooter might have excellent muscular coordination and steady nerves which enable him to hold as steady as a rock, but the finest accuracy cannot be obtained unless his trigger pull is crisp and manageable. Trigger control is the most important single factor if accurate shooting is to be done, and the shooter must know exactly when his rifle is going to fire. In turn this will allow him to call his shots and automatically know whether his bullet has been placed correctly or not.

There is a wide variation in the designs of triggers fitted to the average sporting rifle. Some have double-stage, military- type pulls, while others have single-stage triggers. A few come with too heavy a pull and are non-adjustable; but the majority of modern sporters  have single-stage triggers that are fully adjustable for weight of pull, creep and over-travel. A few European rifles are still being furnished with that anachronism, the double-set trigger, which initially sounds like an ideal solution, since you can use it unset when you’re in  a hurry to shoot at jumped game and set it on a hair-trigger for a slow deliberate shot when you encounter a standing unwary animal at long range.  However, the drawbacks of such a trigger far outweigh any theoretical advantages it may offer. The worst feature as far as accuracy work is concerned is the considerable time lag that takes place between let-off and ignition due to having two separate sets of sears. When the set-trigger is touched-off,the cocked mechanism is released and slams against a second sear mechanism in the unit before the firing pin is released. This heavy blow sets up unwanted vibrations which are transmitted to the barrel having an adverse effect upon its harmonics even before the cartridge is fired. This goes against the basic principle of having a ‘vibration free’ trigger –  a highly desirable feature of modern varmint/target rifles. 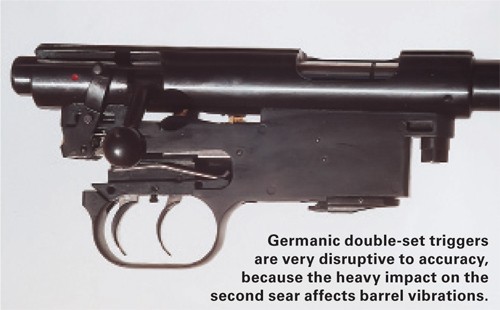 Even the best available trigger is no guarantee of fine accuracy, but no one can shoot his best with a lousy trigger. I believe that a good trigger is even more imprtant on a hunting rifle than a target rifle because the rifleman is more deliberate when shooting a bullseye and generally has more time to overcome a bit of creep in his trigger. When shooting at game, you’ve often got to get your shot away fast without the slightest hesitation.

A good single-stage trigger can be adjusted to give a fine crisp let-off and break cleanly, but for big game hunting it shouldn’t be pared below 1.13kgs and 1.36 kgs is better – closer to ideal I’ve found. Even for varmint sniping  a trigger pull of about  680 grams is light enough.  A hunting rifle then should ideally have a weight of pull of 1.36kgs, but many factory rifles still come with triggers set much heavier than this. Owing to the threat of public liability suits in America, years ago, many rifle manufacturers began fitting their rifles with non-adjustable triggers set for a 2.268 kgs pull or heavier.

Thankfully, this period seems to have passed and companies like Ruger and Savage for example, are now equipping their rifles with excellent triggers, the Savage AccuTrigger is a good example of this. Remington and Winchester have always fitted their rifles with an excellent adjustable trigger. They may be set for a heavy pull when you get them, but it’s relatively easy to adjust these triggers to be lighter and clean breaking, totally  devoid of any creep or overtravel. 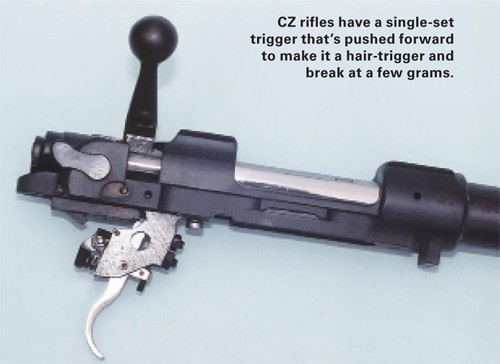 Actually, a trigger’s weight of pull is less important than its crispness. A 1.81 kgs let-off is far to be preferred over one of 1.13kgs that feels spongy or creepy.

A perfect (mechanical) trigger action is a theoretical impossibility, since it would have no motion whatsoever, and something has to move in order the release the striker. However, so close an approximation of perfection is possible that our rather dull human reflexes can be fooled. The perfect trigger action has been described as being akin to the snapping of a glass rod; this means that a good trigger should be totally inert and feel like a thin glass rod being snapped in half, and not show the slightest trace of any movement or reaction to pressure until it suddenly and instantaneously breaks.

A trigger action like this cannot cause a shift in aim or put the shooter’s nerves on edge wondering whether his rifle is going off on the second creep or the third. If a perfect let-off was the only consideration, the problem would be relatively simple, but it is important that the trigger mechanism also be safe. It should be designed and constructed so that it cannot be jarred off by a sudden blow or accidently fired while chambering a cartridge or releasing the safety catch. These things have been known to occur when a trigger has been adjusted too light. A safe trigger is one that will only fire when we want it to.

Any trigger movement after sear release can disturb the aim  while the bullet is still within the barrel and affect accuracy. The trigger should come to full stop the instant the sear is released. Most modern firearms designers know the importance of a trigger stop and American and Finnish rifles in particular are equipped with excellent units that incorporate a series of levers which reduce the chance of an accidental discharge when the unit is adjusted to have minimum weight and travel. While additional levers do increase locktime by increasing the interval, the difference seldom amounts to more than a few milli-seconds and normally locktime varies from about 2.2 m/s for the Remington Model 700 to about twice as long (5.2 m/s) for an old ex-military Mauser 98, while the old German double-set triggers often exceed 10 m/s.

The basic type of override trigger, standard on many  modern bolt-action rifles, therefore, has to be  a compromise in this respect. The slight delay which occurs during the initial phase when some mainspring power is robbed to displace the sear is negligible for all practical purposes. During this time, both the force of the sear spring and the inertia of the parts being overridden feed back. The sear spring is relatively weak, and the sear small with only a short distance to travel. Thus, the overall effect on lock-time is minor – hardly more than a fraction of a  milli-second. 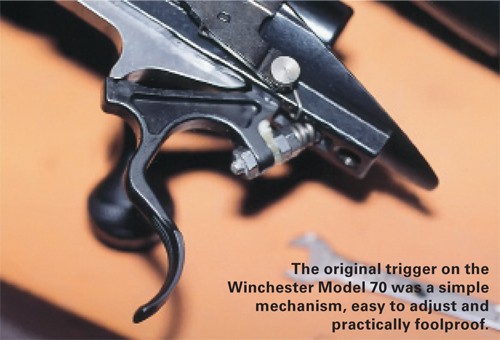 Fast locktime is a highly desirable feature since it gets the bullet out of the barrel in the shortest  possible interval before the shooter has had time to shift his aim enough to make a critical difference.

Having too light a trigger pull is just as bad, often worse than having one that is too heavy. One cannot exercise proper control over a trigger that has no ‘feelî, and therefore it is necessary that a certain amount of resistance be felt by the trigger finger. It is hard to specify just what weight constitutes the right amount as this will vary with the individual, but a 1.31 kg to 1.36 kg pull is, in my experience as light a pull as any big game hunter needs.

The trigger on a rifle (or handgun) must be pressed. It should never be squeezed, pulled or jerked. Pressure is applied against the properly adjusted trigger while the shooter concentrates on keeping his reticle ( or iron sights) perfectly aligned on the target. This pressure is applied in a series of start and stop movements. With the preferred 1.36kg trigger, when the sights come to bear on the target area, the shooter takes up the first 1kg of the pull. The rifle may shift slightly allowing the reticle in the scope to wobble off the aiming mark, so he adjusts his hold accordingly, whilst maintaining the same pressure on the trigger. Then as the reticle comes back into line he takes up another 227 grams. The process may have to be repeated a third or fourth time before the rifle goes off. But trigger pressure is not released entirely throughout, just put on hold; neither lightened or increased, simply held in check. But the experienced shooter will know the exact instance when his rifle will fire and more importantly, where his bullet is going to land.

In the field it may take only a few seconds to get the shot away, while on a target it may take 20 seconds or more. It is impossible to overestimate the contribution a good crisp trigger makes to good marksmanship, but while trigger control is critical one also has to learn how to call his shots. Both of these techniques are indispensable skills to becoming a good field shot.

This article was first published in Sporting Shooter, November 2009.