Every hunting trip is a learning opportunity. Learning more about a particular property, more about your intended quarry, time of day and seasonal factors, gear testing, and so on. Sometimes even successful hunts can teach you a lot. Often a “dry run” can have a large part to play in the successful trip, which might not have been so great apart from the “failure” the month before. Some lessons however are harder in the learning than others. Here I will outline some of the things I learnt and observed in a short hunt one morning not so long ago. Hopefully you won’t simply laugh at our expense, but learn something from my mistakes, which might improve your next hunt.

Al called on the Friday to say that the manager of the property says ‚Äútoo wet‚Äù, and we weren‚Äôt to go hunting the next morning. He said the ‚Äúcreek was up and flowing too fast and most of the animals would have been chased out of where we wanted to hunt by flooding streams and creeks, and it would be too muddy. I thought the real reason was they probably didn‚Äôt want us chewing up the tracks in the 4wd. We were mainly going to be on foot so it was probably ‚Äúa bit over the top‚Äù I thought. 7 days later word was the creek level had dropped a bit and we could hunt if we wanted, though it was un-advisable. ‚ÄúSo do you guys still want to come out or not?‚Äù. Silly question Alan. Twelve hours later three of us were a few hundred kilometres west of home out in the Basalt country of NQ loading up magazines and inserting rifle bolts in the early morning light, gazing upon a creek that was twice as wide as normal and running proper fast. 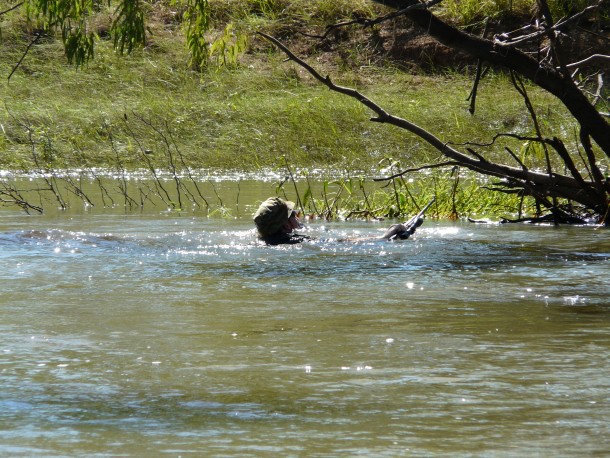 Lesson 1: The property owner/manager knows more then you about the current state of the property than you do.
Our intended hunting¬† area was between this creek and another that lay parallel to it about¬† 1km or so further back. In between these creeks were little ponds, swamps, streams, rubber vine thickets and tall grass. Chital were the big ticket item, but pigs were definitely on the cards too. Normally the price of admission to this great little area was trudging round in wet boots all day from crossing the first sandy shallow creek. Today it seemed the price had been raised to soggy underpants, or so we thought.
There was a sand bar in the middle so we sent in Alan, our fearless leader, to test the waters (literally). Being half a foot shorter, water was only up to his¬† armpits, so I wasn‚Äôt sure what all the complaints were about. Gaining from extra height and watching his path we managed the sand bar at waist depth. It was everyman for himself for the last part, as everyone had their own theory as to where would be the best crossing. I picked mine and went for it.

Lesson 2: It is never too late to admit defeat and turn around.
It took about 5 seconds for things to escalate. Upon crossing the last 5m of the creek between the sandbar and the far bank I found my foot stuck firmly under a submerged tree branch in waist deep water. The current was ripping the sand from under my foot and I started to sink in deeper as I struggled to free my foot. I managed to turn my body about 90 degrees which meant now I was copping the full force of the current and it quickly¬† started to push me down into the water, trapped by my foot still. I had my hand up over my shoulder trying to hold my backpack full of camera and GPS out of the creek and the other has holding my rile sky high. At the point where I thought I was going to have to ditch it all my foot came loose and I scrambled up the bank. The very top of my pack was dry and my camera had survived with about 5cm to spare. The gun, however, had gone three-quarters under, muzzle first. I tipped it up and water ran out the barrel.

Lesson 3: Taping your muzzle with electrical tape isn‚Äôt just for hunting NZ Chamois in the snow.
Bullets and bolt were all completely removed (safety first) and a barrel inspection revealed droplets of water clinging to the bore. Shaking and blowing had little effect. Unwilling to test out the uncompressible nature of water in a high powered sporting rifle I decided to sling the gun and act as tracker and photographer for the remainder of the day. Some other members of the hunting party wouldn‚Äôt have that so we ‚Äúwent all MacGyver‚Äù,¬† fashioning a pull though out of a piece of rubber vine thinned down with a slit in the end and a piece of shirt material threaded through like a patch. I was pretty impressed. It looked the goods. I whipped it through the bore and looked down the barrel. I now had water, milky white latex sap smears and piece of bark in my barrel.

Lesson 4: Carry a bore-snake/pull-through in your pack (though if you follow lesson 3 you probably won‚Äôt need it).
A couple hours of hunting revealed a lot of the little streams and swamps had joined up together and we spent all morning in and out of water (Lesson 1 again). We didn‚Äôt see any deer or pigs, and as the North Queensland sun started to crank up we decided to cut our losses and beat a hasty retreat. 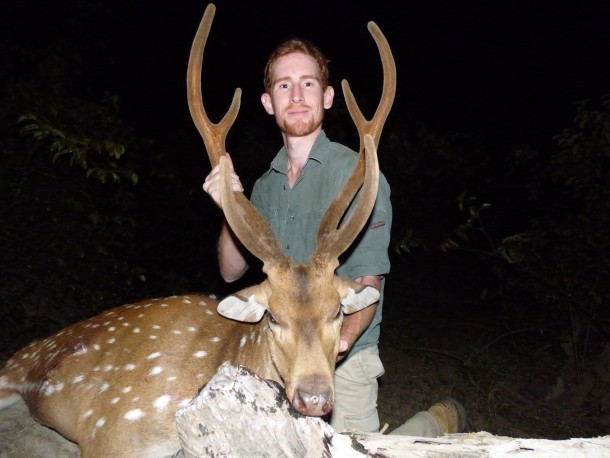 Lesson 5: Completely soaked pants combined with the NQ sun is optimal conditions for weapons-grade chafe. (Love it – Ed)
Walking like bow-legged cowboys, we returned to the place of my earlier unintended dip. Thinking it looked shallower further up stream so we moved there. I bravely decided to sit on the bank with the camera and see how it went. The other 2 ventured out. They got three quarters across at maybe belly button. ‚ÄúThey should be fine‚Äù I thought, as I started to stand to follow, as Paul took his next step. He went from belly button to nipple depth, drifting down stream, bouncing on his tip-toes. Like any friend would in such a situation I started snapping photos. He drifted about 30m like this getting deeper, struggling heroically to keep gun and pack above water. But alas, it was all in vain. He lost touch with the bottom all together and had to full-on swim. The only thing that stayed dry was the top of his hat.

Lesson 6: Ultra zoom compact digital cameras are invaluable for catching the action when a mate gets swept away in a flooding creek.
Paul made it to the far bank, looking like a drowned rat, to his credit with a big grin on his face. Sometime you just have to laugh. It helps keep from crying over drowned smart phones and electronics.

So I hope in amongst the chuckles you have gleaned a tip or two that could work to improve your success rate, or comfort level, the next time you hit the bush. Or could it also be that you are sympathising with very similar lessons? Ones that you have already learned the hard way‚Ä¶‚ÄÇ