Anyone who has done a reasonable amount of pig hunting will vouch for the fact that wounded pigs can run a very long way. Given the thick vegetation they commonly inhabit, locating an imperfectly punctured pig can be nigh-on impossible, not to mention downright dangerous. Big, tusky boars do not take kindly to poorly placed projectiles and following a wounded one up in close cover has the potential to result in a charge and subsequent injury to the hunter. It should be the solemn aim of every hunter to deliver a rapid, one-shot death to whatever game they pursue, but with pigs there is the added dimension of self-preservation to consider! 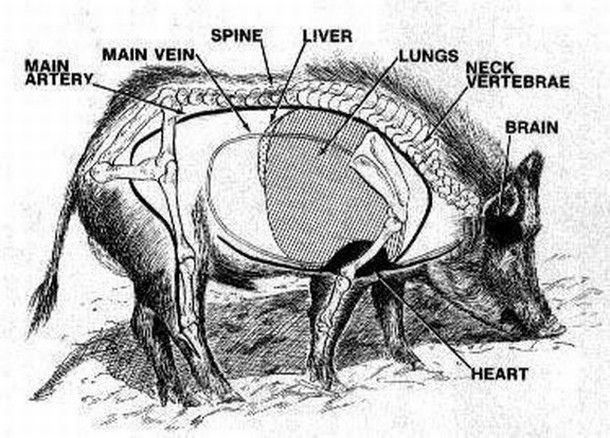 The vital organs on a pig are lower and further forward than on a deer.

To kill a pig swiftly one must first recognise that they are solid animals with a tough exterior. Often their coarse hair is matted with thick, dried mud that can deflect inadequate bullets, especially at oblique angles. At the very least, such caked-on soil can absorb a good proportion of a bullet’s energy. In addition, the leathery skin around the forward part of the chest and neck is very thick, especially on boars, and is designed to provide armour-like protection against other pigs’ tusks when fighting. On very big boars there can be up to 2cm of hide and gristly subcutaneous tissue that must be penetrated before the bullet can even enter the body. The take home message is that you should use enough gun firing properly constructed bullets of adequate weight.

Knowing where to aim for the best killing shots requires an understanding of pig anatomy. As with most big game, I favour a side on chest shot, but to pull off such a shot on pigs you need to realise that they are much more compact than other game species and their lungs are lower and pushed further forward. A lung shot on a deer, for example, would be a gut shot on a pig. Pigs’ hearts, too, sit low. They are located underneath the lungs, just above the sternum where the legs meet the body. Hunters aiming for the heart need to be careful not to shoot under the pig. Ideally, I like a shot about a third of the way up the chest but a little further forward than on a deer. That way you are almost certain to take out the lungs, and have a good chance of breaking the shoulder or upper leg bone. Removing the pigs’ mode of locomotion is a big bonus when it comes to anchoring pigs, while shattering the shoulder blade can convert bone fragments into secondary projectiles that further damage the lungs. If you’re aiming for the lungs and shoot high you will hit the spine resulting in instant death; shoot low and you will hit the heart.

As with all big game species, shooting pigs in the head can drop them on the spot, but you must be confident of hitting the brain (for the location of the brain, see the diagram hereabouts). Be aware that the brain of a pig represents quite a small target and that it is well protected inside the thick bone of the skull. Remember too that a pig’s head is often moving around as it feeds – much more so than the chest. If you miss the brain and hit another part of the head or face you could cause a terrible injury to the pig, which may well escape to endure an undeservedly slow and painful death. Presented with no other option I will use the brain shot when I have a steady shot at a stationary pig, but generally I much prefer the chest shot. 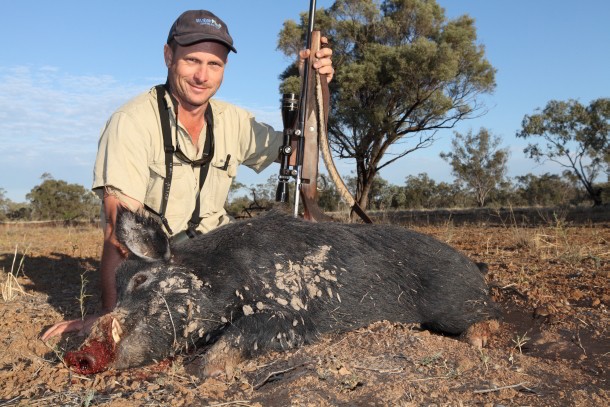 Martin Auldist dropped this Queensland boar with a single 150-grain projectile fired from his Sako .270.