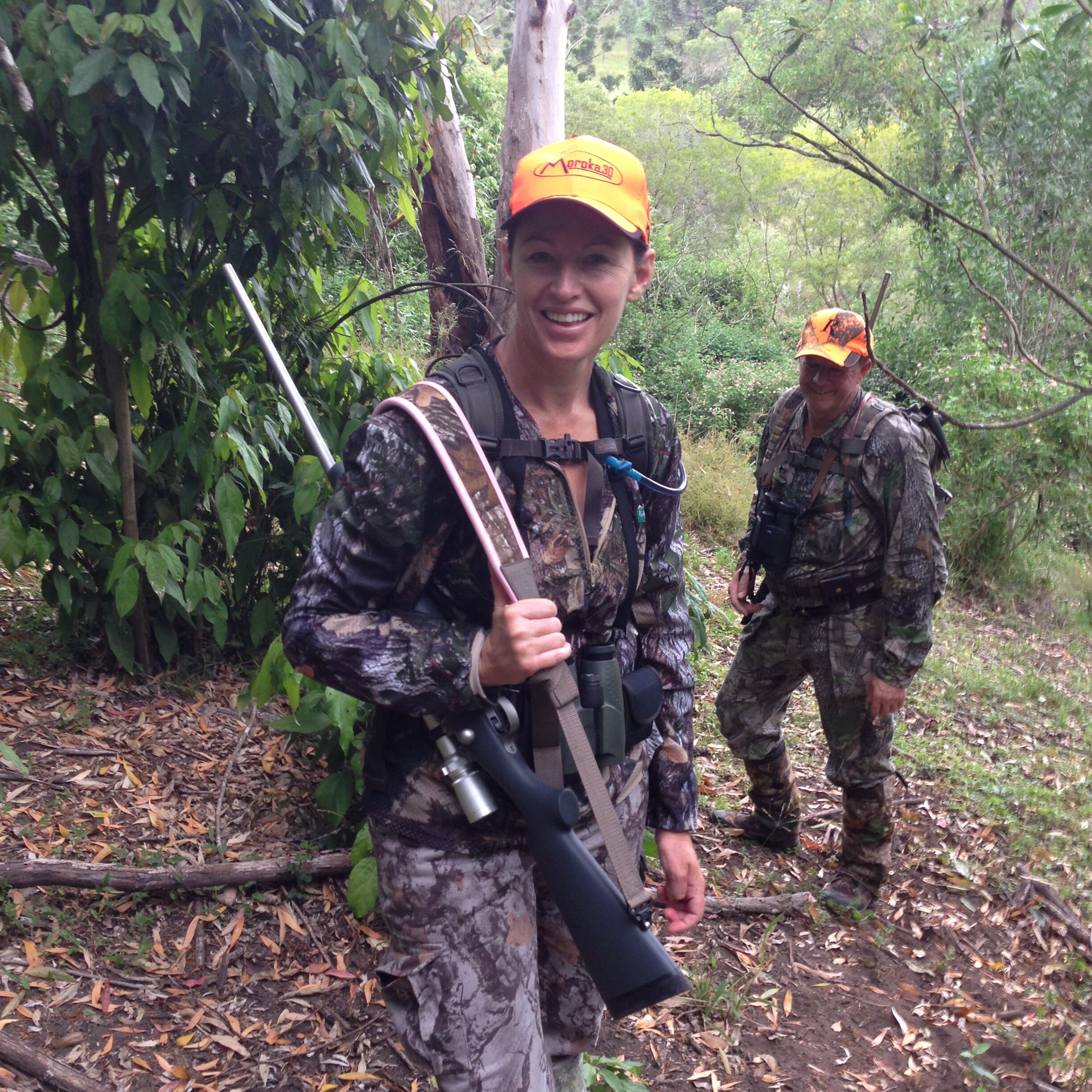 Approaching to take the shot

This story starts on a cool autumn morning in the high mountainous tops of Southern Queensland. Let it be known the characters are authentic and the story is not exaggerated!

Graham, hunter extraordinaire. Has been hunting for a lifetime. Has taken exceptional trophies including black bear, red deer, Lion, Baboon, Buffalo, Hippo, Zebra, and even the odd fallow.

Tracy, hunter on her L’s. Has indeed been hunting, even ‘shooting’ however never taken a real trophy to date.

So the day starts off well. Back packs are chock a block full of the usual hunting gear, water bladders are topped to the brim. Camo attire on, boots and gators tied up. Rifle in hand, bullets in belt. Destination, the top of the mountain. Its hard work as we climb the steep side of the hill with all our gear tightly fastened. Through fences, over large bolder sized rocks, through thick scrub and we are charging at elite athlete pace as Graham takes the lead (not too bad for a 60 ? year old fella).

Tracy, somewhat younger, however not attuned to this terrain so this sprint to the top certainly is an effort. Regardless, as we hit the horizon just on day break Graham’s x-ray vision spots a huge buck at the same time it spots us and of course down it races into the valley below, never to be seen again, or so we thought.

Day 2 and you guessed it, off we head up the very same mountain. Through the scrub, over rocks, under fallen gum tree limbs, amid the humid weather and all the while at sprinters pace. Our aim is to get to the sky line before day break to try and spy the buck, if indeed he was cheeky enough to re-appear.

Once we had made it to the top we crouched down for a well- earned spell and a sip of water with not a sound to be heard. Well not for a ten minutes or so. And then, there it was, the reverberation of the fallow buck ‘grunt’! We

hoped it was the big fellow we saw the morning before and as we glassed the side of the mountain and got a look at him through the bino’s, we were sure it was him. We scurried down the ridge, making sure we remained low and without making a sound. Let me say its tough going down a hill laden with ‘gear’ at top speed and being quiet at the same time. Impossible in fact!

We got down on our all fours and crawled to get in a bit closer and, not happy with our position, did some tummy crawling to get in even closer. We ended up about 150 yards from the buck, with the girls being quite aloof and grazing above the thick scrub. I collect my thoughts and realise its game on. I raise the rifle, get a look at him in the scope and…………….boom! Off he ran as did the does! We scout around for signs of blood but all we find is a fresh scratch on a twig hanging from a low lying bush. Graham cannot believe I had missed, and to be honest nor could I after the so many practice shoots literally over weeks and weeks leading up to the hunt.

Day 3, up we go again and we cannot believe our luck. That buck is back in the same position. Its like groundhog day only this time the buck is grunting his head off and there are no does to be seen anywhere. We get down the side of the rocky slope, pull up at a tree about half way down and this time its 130 yards across the valley from us. I put the rifle to my shoulder and in my head Im thinking “I cannot miss”. The buck starts to move further down and as it turns out there are now some small trees in the way. Im thinking if I don’t squeeze the trigger its going to run off and I will miss the opportunity again. However Im now suffering from ‘stick fever’ after yesterdays efforts.

Now as chance has it this buck was heading straight down the hill heading for thick brush and cover. In my proliferal vision I can see the direction he is heading and now know I cannot wait a second longer. My throat is so dry Im having trouble swallowing and my heart thumps so hard I can feel it moving the rifle. I take a deep breath and hold, slowly squeeze, bang! I feel a rush of anguish and think “did I hit it”.

We made our way over the valley to where he was standing and as we draw closer to the deer I am overwhelmed with excitement and a little bit of regret. I say to Graham “Oh no, I k√Ølled it”. Umm, isn’t that the point? Emotional and exhausted we make our way back to camp to have the head inspected. As it turns out this Fallow Deer happens to be a local record scoring 227. And furthermore, it has fresh markings on its antler suggesting it had been grazed by a bullet very recently!