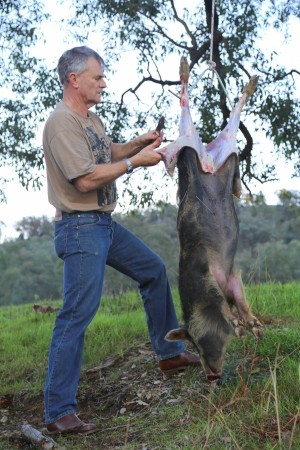 Slowly I unfolded my bipod and crawled out from behind our hiding spot just enough to line the pig up in the crosshairs of my Leica riflescope. As I sought out the exact spot I wanted (behind its shoulder) I saw the pig’s coat was short with bristles that looked incredibly wiry. Easing any tension out of my body I took a deep breath and squeezed the trigger. The pig was down and Ken was on the move toward it with me a few paces behind. While he was pulling out what he needed to dress the pig out from the backpack, I said my little Apache style prayer in my head – thanking it for the food is was providing the family. For me it’s never an easy thing to do, but we are a meat eating family and I am determined to be organic, humane and know exactly what we are eating… knowing the animal has not suffered as they do before they arrive nicely packaged on a supermarket tray.
Ken pulled the skin around the hocks (so he could cleanly get the gambles through the meat) and hung the pig from a tree. This allowed him to work with ease, while ensuring the meat was not contaminated by grass or dirt. I watched in fascination as – once hoisted up – he skinning it from its back legs down, unpeeling the skin as one would a banana. Being a young animal allowed him to punch the skin off using a combination of his hand and the butt of the knife handle, progressively working down toward the neck area. Continually punching the skin away meant there was no risk of nicking it with the knife, thus keeping it nice and tidy.
When he reached the head he cut through the pig’s cervical vertebrae and let the entire coat drop to the ground. With the skin removed, out came the gut hook and he carefully cut all the way to the diaphragm, whereupon he reverted to the normal blade to cut from the sternum down to the neck. As I watched I saw this was as a simple and yet effective way of opening the abdominal cavity without risk of punching or cutting the intestines and making an almighty mess. Finally, in one movement, he stripped out all the internal organs – a delish treat for  that nights scavenging foxes!
In Ken’s kit of magic tricks he had a one hand battery operated AEG reciprocating saw, with a blade designed for cutting through bone. If you’re an unseasoned gringo such as myself, the next step is to take your knife and run it along the edge of the vertebrae along the full length of the carcass down to its neck. This forms a guide along which your saw blade will then follow.
I must say, the reciprocating saw is an awesome tool; it takes up little room, is lightweight and saves a heck of a lot of time and muscle power cutting up the animal.
Once my piggie was cut in half, Ken broke down each side into four sections; shoulder, thoracic (or rib section), loin and back leg.
One thing to keep in mind is that you need to be careful when eating wild pig. As I mentioned earlier they can be the carriers of parasites and disease. Luckily Ken was a meat inspector in his previous life, so he always checks the lymph glands and other key areas for any sign of disease. A great rule of thumb – if in doubt, leave it!
As with any wild game it is important to cook the meat properly ie hot enough and long enough, so you stay on the safe side. And yes, Mr Piggie was toe-curlingly deeeelish (just check out my recipe!)

Method
Sauté onion and garlic until soft then add wild pork mince. Once brown add corn, carrot, tinned tomato, tomato paste, spices and cook on medium heat. Season to taste.
While the meat is cooking slice the tomato & avocado then grate the cheese, placing  each in a bowl – with an extra bowl of sour cream. Pop these on the centre of the table with a bowl of your pork mince, so everyone can make their own.
This is so easy to prepare and the kids will love it. It’s also a great way to use every little bit of your fabulous wild pork meat. I love sourcing organic, it not only tastes great but it’s the perfect match for your naturally free range pork! Leftover meat can be frozen and used in a lunchtime wrap or fajita.
Enjoy!