This year the title of Australian Can Shooting Champion will once again be decided on the third weekend in July at the Ardlethan Gun Club in New South Wales. What started as a casual competition between a few mates throwing up beer cans over 30 years ago (remember when they were steel?) has developed into a not-to-be-missed event attracting up to 180 shooters. It’s on again soon, and all shooters are encouraged to attend and try their luck at winning some great trophies.

The scoring system for this unique shotgun shooting championship is based around the distance a can be belted with the shot. Short fences are put up at different distances away from where the cans are launched. Shooters get one point for landing the can inside the first fence (a missed or lightly hit can), two points for knocking it over the first fence (a bit better shot pushing the can further), and three points for knocking the can over the outer fence (which takes a decent punch). The Australian Can Shooting Championships at Ardlethan attract up to 180 shooters each year.

Originally cans were thrown from wagon wheels with a pair of bonnet springs swinging the arms but this was fraught with danger. Now arms are attached to modified manual clay target traps. Since neither beer nor soft drink comes in tin cans anymore, brand new baked bean tins are donated to the event and organisers put a lid on the empty tins with a contraption made from an old shot shell reloading press. Some 11,000 tins are used in the event a year, so it’s a massive job for the members. During the event, local sports clubs or the show society load the cans into the traps all day as a fund raiser.

There are a range of events such as double barrel, single barrel, gun down, delayed pull and double rise. The morning session is used as an eye opener, but the afternoon round determines the Australian Can Shooting Champion (based on the day’s combined scores). There are also a variety of grades including A, B, C, Ladies, Veterans, Super Veterans, Juniors and Sub-Juniors.

According to secretary Ian Maslin, even though the event is shot as a competition, having fun with your mates is the most important. “We all cheer the ‘threes’ and laugh as some cans split and go nowhere. When you get hold of one they just keep going! Shooters dream up the ‘perfect load ‘ from year to year, but it really doesn’t matter: 8s, 9s and 10s are all good – but first you have hit them!” says Ian.

“Many a good shot has come undone, while new shooters have adapted and walked away with a trophy. The wind can be a great help or a pain but no one minds – it’s all part of the day. For a small club it is an almighty effort. With new amenities, shed and an extension to our clubroom, we are ready to go again this year”, says Ian. “A 75 target sporting clay shoot finishes the weekend on the Sunday”.

The event is always on the third weekend in July, which this year is July 19 and 20. It’s an 8.30 am start, and you can just rock up and enter of you want. Anyone interested in attending can call Ian on 0427743206. Alternatively, check out the Ardlethan Beckom Sporting Clays Facebook page. 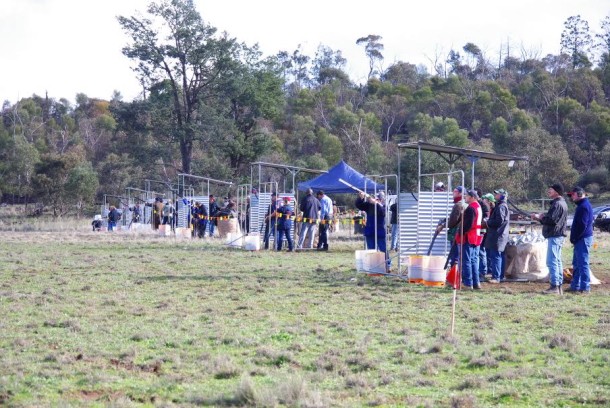 The main competition is for Australian Champion Can Shooter but there are many different divisions.