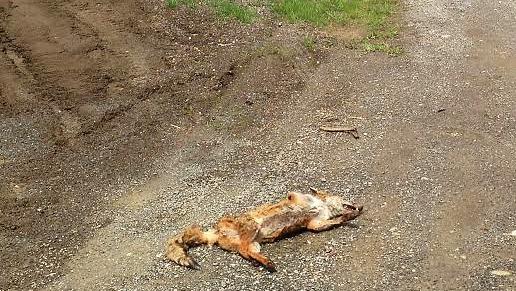 A dead fox was recently found in Tasmania confirming their presence. The discovery has brought questions to whether the multi-million-dollar program to keep the island free of the predator was ever justified.

The discovery was made on Frankford road in northern Tasmania. The Invasive Species hotline received the report and later retrieved the carcass confirming the fox to be a juvenile male that had died due to traumatic injuries.

Dr Lloyd Klumpp said further investigation was required to find out how it came to be there and if it was dead prior to being where it was found.

The find has sparked social media comments, with visitors to the state saying they have seen foxes, but others are sceptical.

Suzie wrote: “This is interesting as we saw a live fox on our return trip from Cradle Mountain to Devonport. That was last September. Devastating for this environment if they continue to increase in numbers”.

Another poster, Toni, wrote: “I saw a live fox in Tassie last time I was there. I didn’t realise there weren’t supposed to be any until I saw a TV program later”.

The weekend discovery is significant because of the hotly disputed presence of foxes in Tasmania which has played out for more than a decade, with a taskforce set up in 2006 “in response to evidence of fox activity”.

It is evidence which has since been disparaged by a fox expert and called into question by a determined former farmer turned policeman turned mayor turned independent politician who is alleging a conspiracy.

In the past allegations were made that hunters smuggled fo cubs into Tasmania around 2000 and set them loose in the wild. These allegations were never confirmed after a police investigation.

The Fox Eradication Program was set up “in response to evidence of fox activity in Tasmania”, the Government said, and was “unique in attempting to eradicate foxes before recognised establishment had occurred and fox impacts were highly visible”.

Despite about $50 million being spent on the program, a 2014 review was scathing of the methodology and said what had been labelled as DNA from foxes purportedly found in fox predator faecal matter was probably from cattle, pigs, rabbits or even Tasmanian devils.

“Here is an example where you can propose that something exists when it doesn’t, and if you follow that narrative with a suitable amount of media and spin doctoring, you can get a good proportion of people believing it,” fox ecologist Clive Marks said at the time.

The program was scrapped in 2014, two years ahead of the planned 2016 end date, with the Government asserting “a range of physical items have been collected since 1998” proving foxes were on the loose.

The plot thickened in 2016 when former policeman turned independent MP Ivan Dean lodged a 100-page official complaint to police alleging evidence used to support the program may have been fake, including the planting of fox faecal matter to give the impression of the animal’s presence.

Mr Dean took his complaint to the integrity commission when the police took, in his view, too long to investigate.

Despite the potential for a political free kick, current Minister for Primary Industries Jeremy Rockliff has steadfastly rejected calls for an internal investigation into the handling of the affair by the then Labor administration.

Mr Dean said he was also waiting to see the autopsy results.

“I’ve never said there aren’t foxes in Tasmania,” he said.

“Where did it originate from and why was it in Tasmania?”

Is this latest photo the definitive proof foxes are indeed at large in the wilds of Tasmania? Dr Klummp is not so sure.

“Until we have the full results of veterinary examination and further investigation is completed, it is not possible to speculate in any way on the history of the carcass,” he said.

“Although, we are still investigating the report, we are grateful to the member of the public who has promptly reported the carcass as soon as possible after they saw it.”