I’m not at all an expert on hand guns, but on a recent trip to Broome, Western Australia, I was lucky enough to get the chance to inspect and photograph a revolver.  Not just any revolver – a very special one.  The one that belonged to Malcolm Douglas.

Douglas was, of course, a legendary bushman and wildlife documentary maker who knew the Kimberley region like the back of his hand.  I was a huge fan of his TV shows in my youth, and my brothers and I often dreamt of emulating his incredible adventures.  Although he was better known for his fishing exploits than for hunting and shooting, he was once a professional crocodile hunter before starting a crocodile park near Broome in 1983. I can only guess that Douglas kept the revolver as insurance against one of his beloved crocs getting a little too friendly. Sadly, Douglas died too early, killed in a car accident in 2010, aged 69.

As you can see in the accompanying photos, the revolver is a Ruger Blackhawk in .357 magnum. The stamp on it reveals it was made by Storm, Ruger and Co. Inc., in Southport Connecticut, USA. Functionally and mechanically the revolver appeared in good shape, but with the worn bluing, the dents in the wooden stock and the tattered leather holster it was easy to imagine that it accompanied him on lots of epic expeditions.

I seem to remember seeing the revolver in some of his shows.  If memory serves me correctly, he sometimes used the butt as a hammer!  I’ve scoured through hours of footage trying to find a segment in which the revolver appears, but I’ve had no success.  If anyone out there can direct me to the vision, I’d love to post a clip on the website.

In the meantime you can find out more about Malcolm Douglas on the Douglas family website. This story is related with the kind permission of Malcolm’s widow, Valerie.

P.S. As a post script to this story, Sporting Shooter reader, Ben, directed me to some footage in which the revolver is featured. You can view that footage HERE. Well done, Ben, and thanks heaps. 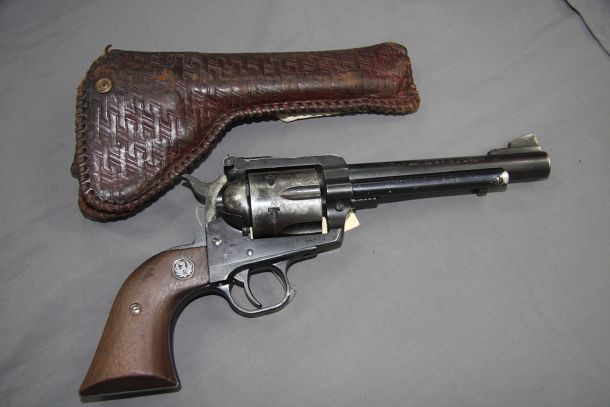 It’s easy to imagine that this weathered revolver accompanied Malcolm Douglas on some epic adventures.