On a warm Wednesday just passed I attended the NSW Department of Primary Industries Game Licencing Unit (GLU) Stakeholder Reconnect Seminar at Penrith Panthers in Sydney’s outer west. This Seminar was one of several the DPI conducted from Brisbane through to Melbourne and their aim was to reassure hunters and Approved Hunting Organisations (AHOs) AKA Hunting Clubs and other relevant peak bodies, that subsequent to the disruption of the operation of public land hunting under the aegis of the now defunct Game Council, that business was resuming and licensed hunters were to be engaged and worked with to ensure hunting stayed a seminal part of NSW community culture. 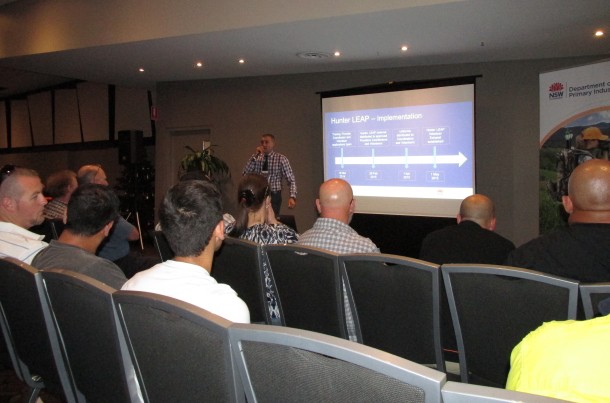 Heading up the session I attended was Troy Hogarth, the GLU’s Head Compliance Officer and team leader of ten area compliance officers throughout the state. Also attending to assist with questions and engagement with the audience were Joe Amoroso, Ray McConnell and Amy Franklin.
The seminar’s aims were to inform and engage with hunters and clubs in the following areas:
How the new GLU fits into the DPI and how they operate.
Hunter LEAP (Learning, Education and Accreditation Program), the new hunter education initiative which includes the R-Licence Assessment Course, short courses and workshops and a variety of hunting topics and firearms training.
The role of Accredited Training Providers and Accredited Trainers in Hunter LEAP.
The new policy and procedures underpinning management of AHOs.
Game licensing compliance operations, including the “Shut The Gate on Illegal Hunting” campaign in partnership with the NSW Police Force, part of the wider “Shut the Gate on Rural Crime” program.
Game licensing programs such as public land hunting and native game bird management.
The Game and Pest Management Advisory Board.    (Game Board)

While many in the audience were principle people in their own AHOs, there were some individual hunters who needed to be engaged as they were not as informed as their hunting organisations. It was gratifying to be told that the presenter and the staff in attendance, apart from Joe Amoroso, were old Game Council staff and that a good 50% of the GLU were indeed previously part of the Game Unit of the old Game Council.
The old Game Council setup was exceptional in Government bodies in that it had a Council of members who made policy and operational decisions which were implemented by the Game Unit. they advocated for hunters and ran compliance and enforcement and Government saw this as a paradox at least and conflict of interest at worst. This was one of the major problems for the government and they had to legislate the Game Council out of existence and build it again as a more accountable government agency.
Consequently, the members of the new Game Board (all of who are hunters and involved in the hunting community), while having no executive capacity like the old Game Council, work in an advisory capacity direct to the Director General (DG)  and Minister, currently Katrina Hodgkinson, both of whom are thoroughly supportive of the philosophy and implementation of sustainable recreational public land hunting in NSW. The GLU’s director is Dr Andrew Moriarty, from the old Game Council and he has direct access via the DGto the Minister. In short, the GLU and NSW DPI want to make recreational hunting work for all stakeholders involved.
There are currently over 200 State Forests now available for recreational hunting by appropriately licensed hunters, with a streamlined booking system in operation. Importantly, it is now mandatory under the regulations for hunters to be equipped and knowledgeable in the use of an appropriate GPS, so geographic embarrassment and the likelihood of subsequent accidents is absolutely minimised. Apart from a few necessary refinements in operation, Public land hunting in NSW continues in much the same way it did under the old Game Council.
In addition, the Native Game Bird Hunting Program is rolling out on properties where the owners need mitigation of their bird numbers to protect crops. The property owners can approach the DPI and hunters who have successfully completed the Waterfowl Identification Test will now be permitted to harvest ten species of duck on NSW private properties.
It is apparent that the hostility expereienced by the Game Council from the O’Farrell Government has disappeared, with Mike Baird seemingly not of the same prejudiced mindset against recreational hunters. With a sympathetic, more integral and embedded Game Licensing Unit inside the Government’s DPI, public land hunting will be much less prone to unnecessary disruption and threat. From my observation thus far, I believe hunters in NSW can look forward to a more certain future in public land hunting and a more engaged future with government in general.
If you would like to obtain an R-Licence or find out more about NSW DPI Game Licensing and programs, then log onto their website at http://www.dpi.nsw.gov.au/hunting