Those of us old enough toremember the British comedian, Dick Emery, will no doubt recall theabove saying perpetrated repeatedly by his mincing, sexuallyambiguous character whose name escapes me now. But this title refersmore to benchrest skills than comedic.

I am lucky enough to havehad distributors send me samples of their target and huntingprojectiles from time to time in order to test them in my rifles andreport back on their consistency. I say lucky because, although I ama reasonable shot with a sporting rifle and accomplished in ServiceRifle discipline, I am hardly a benchrest shooter and am not likelyto become one any time soon.

Nevertheless, my limitedexperience and research gives me pretty reliable formulae to applydifferent loads to those projectiles that often give pleasing resultsthat hopefully sell a few more worthy bullets. 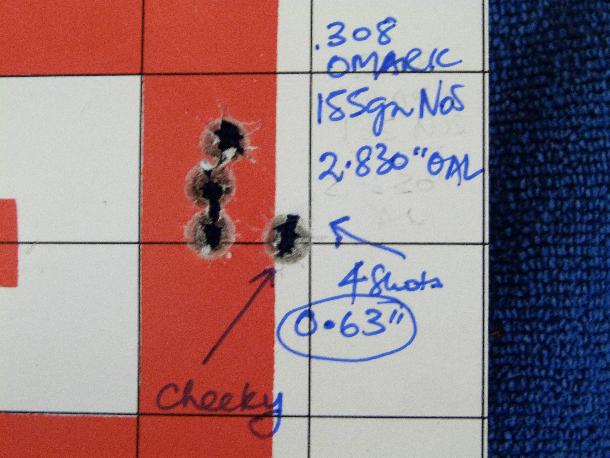 This benchrested group from a .308 target rifle shows the effect of inconsistent shot-to-shot cheek pressure in the one windage flyer evident.

Now benchrest technique issomething that I am still finding difficult to master after manyyears trying without professional coaching. My other shootingexperience tells me that I must be absolutely consistent with theposition of rifle, body and hold for every shot in order to garnersuccess and with my fairly basic equipment and no close mentor I amdoubly handicapped.

When one is in the fieldand service shooting, you generally fire fairly quickly after targetacquisition, without really consciously going through the steps ofconsistent hold, breathing, follow through and release; it all justhappens because instinct and muscle memory kick in.

On the bench however, Isometimes tend to “overthink” each shot, with the consequencethat I will inevitably give one element more or less emphasis thanthe other from shot to shot, while totally neglecting other factors.To illustrate, I started rested shooting using a free hold at theforend (ie no front hand pressure) at the front end but more latelyhave started to hold it down in bigger centrefire rifles. I have toconsciously do it though, due to the ingrained mental performancepattern from the free hold days. Inevitably, when my concentrationwanes (something that can happen when you addle your brain withrepeated .30-06 recoil off the bench), I let one or more of the groupgo with free hold instead of held down as I had started the group.Guess what! It shows on the target, with two separate groups forming,one up-one down.

One factor that Ifind consistently slipping in my technique is that of cheekweld (Ahh! you say, hence the title). It happens with all types of chamberings from .22 Rimfire up to.30-06 in my case. It is instinctive to hug the rifle into yourshoulder with a snug cheek pressure when shooting offhand, so fastrecovery from recoil for subsequent shots is the norm in the field.Hair-splitting accuracy isn’t necessary, so small variances incheek and butt pressure don’t matter so much, but on the bench it’sa whole different story. 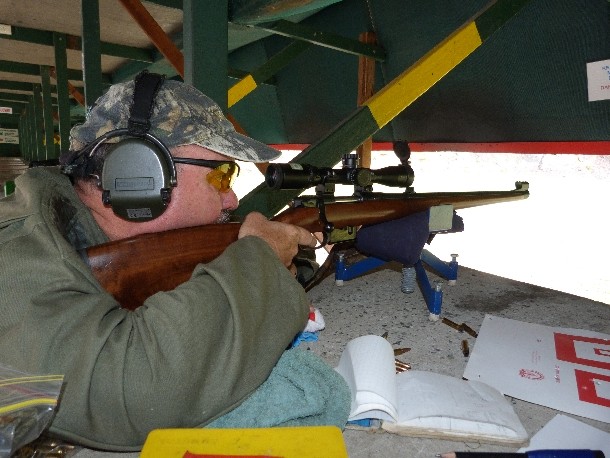 I find myselfunconsciously wanting to lean my cheek into the comb and when myconcentration lapses, instead of the light, consistent, just-therecontact that I am trying to cultivate, I lean in for that onegroup-spoiling lateral shot (not wind as you’d like to think itwas). The rifle naturally bounces away from pressure, demonstratingNewton’s Third Law of Motion– oft quoted as “Every action hasan equal and opposite reaction.” The pic of the group illustratingthis article shows just that phenomenon. And I am duly sorry to MrNosler for my “cheeky cheek” that got in the way of a really nicepotential one-holer.

How do we avoid thisconcentration lapse, whether it’s forend pressure, butt pressure orcheek weld? The answer is to develop a drill. Yes, that’s thereason those Welshman prevailed at Rorke’s Drift. When all seemedlost and fear threatened to overtake the garrison, the officers tooka minute, composed themselves and reverted to tactical doctrine.Meanwhile the soldiers responded to words of command that promptedthe well-practised actions of the parade ground and rifle range,overcoming their trepidation.

Now I just have towrite down the steps and consciouslyperform them for each and every shot.

Once you have consistent pressure on the rifle at all contact points, for every shot, then success will come.