My wife Danielle suddenly appeared beside me, just as I was secretly stowing my Sako in our Triton twincab ute.

“This is a family holiday, not a hunting trip”, she remarked pointedly.

Together with our three sons, we were packing for a month-long road trip through Queensland. I was looking forward immensely to spending some extended time with my gang and I had a sneaking suspicion that somewhere along the line I might find a use for my beloved .270.

Our itinerary was to take us from our home in Gippsland, Victoria, through outback NSW and SA and end up eventually at a remote cattle station in western Queensland, where we would stay for a week as guests of some friends of Dad’s. It was the week on the cattle station that had captured my imagination, though I had not even broached the subject of hunting with our hosts.

Ten days and some 3000 km after leaving home, I sure was glad I’d brought my rifle along. By the time we reached the property gates, I’d seen seven live pigs crossing the road in front of us. To say I was excited was an understatement, and I couldn’t stop thinking about the Sako in the back. After a sumptuous welcome dinner and a good few frothies on that first night, I tentatively asked the owner whether he would mind if I relieved him of a few of his feral freeloaders. It turned out he was as happy as anything for me to have a crack at some pigs whenever I wanted.

My first chance came just after tea on the second night, when I managed to sneak out for a look around – but there was no way I could escape without my two eldest sons, Lach and Cal.

Together in the Triton, we cruised slowly down a barely discernible station track which, according to the somewhat rudimentary map we had been given, should lead to a remote windmill and waterhole. If my hunch was right, there’d surely be a few porkers poking about there somewhere. It looked perfect and I expected to see pigs at every turn.

The waterhole revealed fresh pig sign in the mud along the edge, while the drying bones of pigs past littered the bank. In terms of live pigs though, we drew a blank. Eventually we turned for home as the Queensland sun sank quickly towards the horizon.

About half way home it happened. Something stirred in my peripheral vision and I glanced over to spy a rangy black and white boar rollicking through the sparse scrub parallel to the track. Instinct took over as I rolled the Triton-cum-gunship to a stop, poked the Sako out the open driver’s window and rattled a shiny new cartridge into the breech.

Taking a hasty bead on the quartering boar, I let rip. The boar gave the slightest stumble and continued on his now not-so-merry way, while the boys in the back berated me for having missed. I knew better, but before I could even tell them so the big pig slowed to a walk, then tipped to the ground in a cloud of dust. 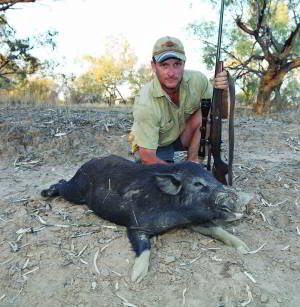 The 150gn soft-nose projectile had entered south of the ribs and obliterated most of the organs north of the diaphragm. How he’d kept running was anyone’s guess – these Queensland pigs are tough! He wasn’t a huge-bodied animal, but his bottom jaw sported reasonable hooks, which we confiscated after taking the obligatory photographs.

We returned triumphantly to the homestead well after dark to find Dad waiting out the front, concerned that we may have become lost somewhere on the vast station. Danielle, on the other hand, was well used to my late returns and was relaxing nonchalantly on the lounge inside. Lach and Cal excitedly relayed the hunt to their Grandad while I secured the firearm and made plans in my head for further assaults.

The coming days were awesome. The outback hospitality of our hosts was phenomenal and it was great to get a real feel for station life and the local area. The boys and I helped out with the chores wherever we could, which usually involved following our hosts on a run around the bores each day, checking the water and feeding the cattle. It was a great way to become familiar with the property and, of course, I was always on the lookout for pigs. 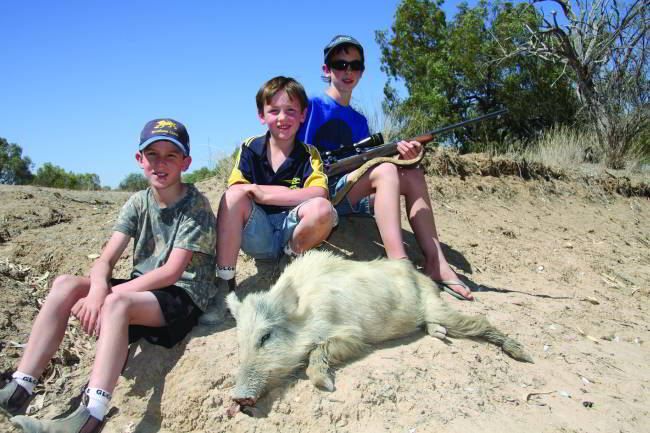 On one such bore run, we disturbed a pure white pig as it dozed in the shade of a stunted tree. Alighting from the Triton with my Sako, I followed it for around 30 metres until a shot presented, then easily bowled it over from short range. It had been a good few years since I had shot a white pig, but we found this one to be in extremely poor condition. We had surely done it a favour by putting it out of its misery.

Another day we all took a picnic lunch to a remote but scenic stretch of creek at the far end of the station. By the time we arrived we had travelled 53 km from the homestead and the mercury was pushing 47oC. We had an enjoyable lunch despite the heat, but afterwards I couldn’t help but have a quick look along the creek – it sure looked perfect for pigs, lined as it was with scattered lignum bushes and coolabah trees.

Less than 300 metres after leaving the rest of the gang I was already sweating up a storm when I spotted two jet black pigs lying side by side in the water, right out in the open in the middle of the day. Clearly they had found the extreme heat intolerable and had thrown caution to the wind in their efforts to find relief. 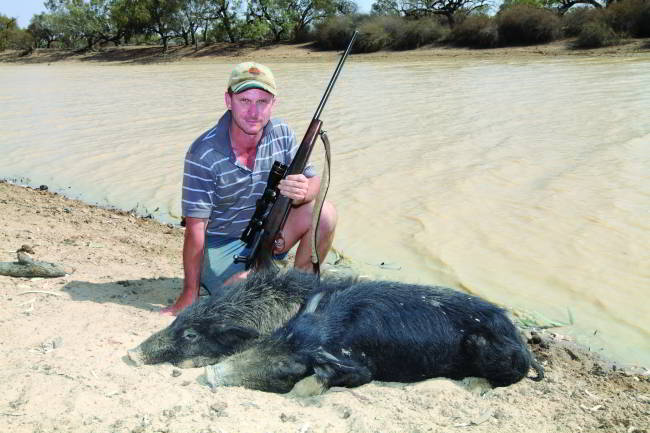 Leaning on the fallen bough of a tree, I took careful aim at the largest sow and ensured her relief was permanent, delivering 150 grains of hot, high-speed lead into her chest. She never regained her feet, barely moving a muscle as she transitioned from this world to the next. The crashing report from the Sako, though, rudely awoke the other pig, which was onto its feet in a flash.

The three-quarter grown beast stood uncertainly just long enough for me to send another Powerpoint on its devastating way. The perforated pig crashed back into the drink, splashing up coffee-coloured water with its thrashing trotters.

I walked down to drag the carcases clear of the creek and within minutes heard the excited voices of the boys as they ran down the bank to see what all the commotion was about. It was a great chance for a family portrait, so Danielle snapped away with the Canon.

I continued on my way for another ten minutes and found yet more pigs parked in the deep shade of a lignum bush. They took off helter skelter through a loose thicket of trees and two half grown models eventually intercepted some lead – after a few practice shots. 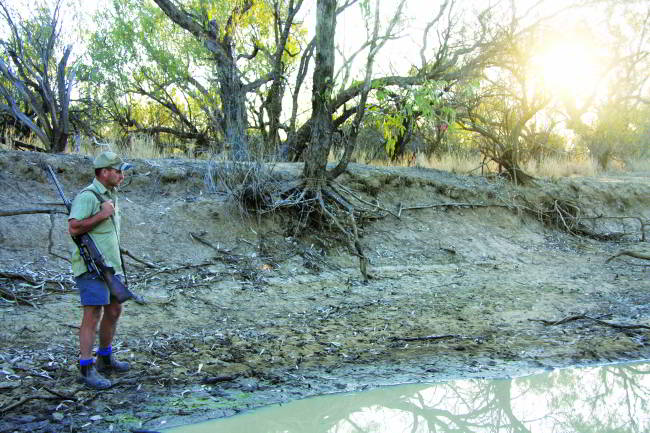 I’m sure that if I’d had the time I would have found a heap more sport around that waterhole. For now, though, it was time to pack up the picnic gear, head back to the homestead, and get started on the evening chores.

All too soon our wonderful time on the station was drawing to a close. Soon we would be  heading off on the next leg of our journey. On the last night I took one last opportunity to have a hunt along a drying creek not far from the homestead. This time Lach came for a walk with me and it wasn’t long before we were prowling along some very promising lignum country just before sundown.

We hadn’t gone very far at all when we came across a side creek that contained some stagnant water, while the banks showed all the signs of recent pig activity. 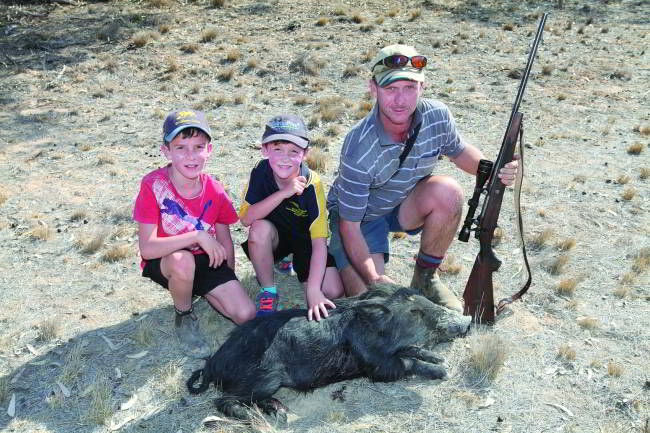 I had just pointed the fresh sign out to Lach when a hairy black boar erupted out of the lignum, bolting along the crest of the bank. I shuffled to find a clear lane then threw the Sako to my shoulder once again. Such running shots are never easy but this time the sight picture was perfect as I felt the familiar pushback.

The boar motored on, seemingly unfazed, but I was confident of a solid hit. It disappeared behind some lignum, but a cloud of dust betrayed the fact that he was down for the count. Lach and I headed over to find a solid pig taking his final breaths. It was a satisfying finish to our stay on the station. After pictures we found our way back to the ute in the half dark and motored back to the homestead.

The following morning we packed the vehicles and said our farewells to our hosts. We were all sad to leave, but buoyed by an invitation to return at any time.

As we drove out along the dusty driveway, I couldn’t help but think that next time I might push hunting a little higher up the priority list…

This article was first published in the November issue of Sporting Shooter magazine.