In the slowly gathering light of dawn we could just make out a fallow buck as it pranced in a typically ungainly fashion across the salt marsh flats that separated us from our hunting block. Disturbed by our approach, the buck was making for the safety of some tea tree scrub, carrying his reasonable rack high and proud. On another day he may have drawn closer attention from at least one of my companions. For today, though, he was safe. We had much smaller game on our minds: the diminutive hog deer.

I was only along on this hunt as an observer. The hunter was my 16 year old son, Lachlan, while our guide was experienced deer man and Para Park Co-operative member Russell Kremser. Lachy had been lucky enough to be drawn in the Co-operative’s junior hog deer ballot. The ballot is held each year on one of Sunday Island’s designated hunting blocks that is set aside specifically for the junior hunt. The successful hunters are allowed to hunt one antlerless hog deer each, preferably a female. Lachy had drawn one weekend in April to claim his prize. Before bumping the abovementioned fallow buck, we had all been out of the sack early, having overnighted in Russell’s aluminium ‘tent’ (actually a semi-permanent hut). Island rules demand that hunters must walk to their allocated hunting block, and we had a good 30 minutes to reach ours. Luckily Russell knows the island like the back of his hand and navigating our way to the block’s boundary was no problem even in the pre-dawn murk.

Now, just as the light became bright enough, it was time to hunt. We headed for some clearings that Russell knew of not far beyond the start of the impenetrable tea tree. I let Russell and Lachy lead the way, following along about 30 metres behind to reduce noise and the chance of being seen. The hunt was on!

I’d love to relate to you a long, tense story of how Lachy and Russell hunted hard through the tea tree and bracken all day, stalking several deer but having frustratingly bad luck until persistence finally paid off and they prevailed, sweaty and exhausted, at last light on the final day. Sometimes, though, plans just work out much better than that!

Our small group had travelled only a few hundred metres, slowly skirting the tea tree while painstakingly glassing the grassy edges of the clearings. Suddenly Russell and Lachy dropped to their haunches, Russell’s binoculars glued to his eyes as he intently studied something on the far side of the clearing. Eventually I saw Russell lower the glassware, then he and Lachy engaged in a whispered conversation. Then they both looked at me, and motioned me over. On hands and knees, I covered the 30 metres to them, careful not to show myself above the sparse grass and bracken that served as our only cover. When I got there, I received the ‘sitrep’ from Russell. There was a small antlerless deer casually grazing about 10 m out from the sanctuary of the tea tree on the far side. Russell’s quandary was that, although it was definitely antlerless, he couldn’t say for sure that it was a female. Seeing I was on my very first hog deer hunt I was little use in progressing the decision, but together we studied the small deer for several minutes. The deer was completely unaware of the six human eyes now transfixed on it, glancing up and around only occasionally to check for danger. “If I was the shooter, I’d shoot it,” was Russell’s eventual judgement. “Well let’s shoot it!”, I replied.

Once the decision had been made, things happened quickly. Russell spread the shooting sticks before Lachy, while he unlimbered the Sako .270 with which he had practiced so much for this very occasion. Getting as steady a rest as is possible over sticks, the junior Nimrod readied the rifle and slowly squeezed the trigger with a confidence borne of many practice sessions on a life-sized hog deer silhouette in the vacant paddock of a farm near home.

At the familiar report from the Sako, the deer simply collapsed to the ground, barely moving a muscle as it transitioned from this world to the next. Having executed a perfect one shot kill, Lachy had ended his first ever hog deer hunt barely twenty minutes after it had begun. Together, the three of us headed over to inspect Lachy’s fallen prize, pacing out the distance as we went. Eighty long strides had separated hunter from quarry, which on a small target over shooting sticks was definitely no ‘gimme’. I was proud of the efficiency with which Lachy had effected the shot.
The beautiful deer was a young animal in great condition, and the prospect of some delicious meals of tender venison was making my mouth water as we had a closer look. A tiny set of testicles belied the fact that the deer was actually a male – but I told Russ I wouldn’t mention that. Lachy, for his part, couldn’t be happier; he had one more hog deer than his Dad. Pictures taken, Russell and I tied the deer’s legs up so that Lachy could sling it over his shoulder for a the walk back to camp.

We strolled back at the Island’s meat house to prepare the venison, Lachy also keepingt the skin as a souvenir. As we entered the details of the kill into the log book, we happened to notice an entry by Col Allison from not long prior. He had been successful in taking a very good hog deer stag, the story of which has also been related in this publication (www.sportingshootermag.com.au/news/april-fools-day-stag).
Hard work done, we whiled away the rest of the day in the very pleasant Sunday Island environs, and Lachy attempted catching flathead by casting soft plastic lures over the mudflats near the jetty. According to Russell this is a very productive technique, but April is a little too late in the season and the water is too cold. Lachy certainly agreed!

After a relaxed night during which Russell and I partook of a few celebratory beverages, we pack up our gear – and the venison, of course – and caught the ferry back to the mainland. It had been an awesome weekend in which Lachy and I both learnt heaps about hog deer. I can’t thank the Para Park members enough for all their hard work in getting the junior hunters organised. Out of the six hunters that participated, five were successful in taking deer. It’s such a great opportunity for the kids and I’m sure they are now all hooked for life. 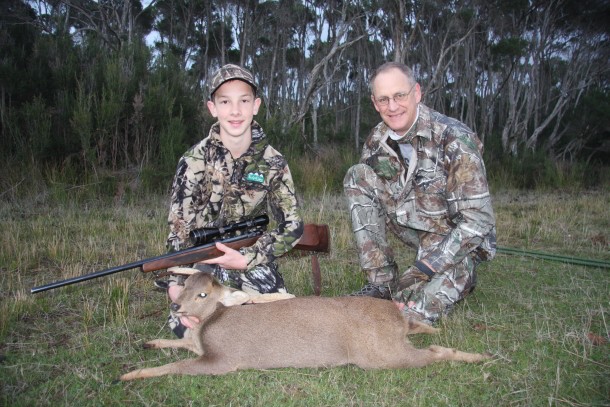 The Junior Ballot
The Para Park Junior Hog Deer Ballot is open to all hunters between the ages of 13 and 17, provided they hold a Junior Firearms Permit and a Victorian game permit endorsed for deer. You do not have to be a member of Para Park to enter the junior ballot. Juniors that are successful in drawing a place in the ballot will be offered the opportunity to hunt on an allocated weekend during the hog deer season. An experienced Para Park member will be assigned to each junior to guide them on their allocated weekend. Prior to hunting, all juniors must attend an orientation day on Sunday Island. On that day they must also pass a shooting test and firearms safety assessment at the Island’s rifle range, using the rifle they will hunt with. An application for the junior ballot can be found HERE.