Alongside the exhilarating stalks, bush adventures and great memories shared with good friends, game meat is one of the greatest prizes that hunting offers. Over the years as I gained more experience as a hunter, game has become a standard part of my diet at home and cooking/preparing it has become a passion in itself. 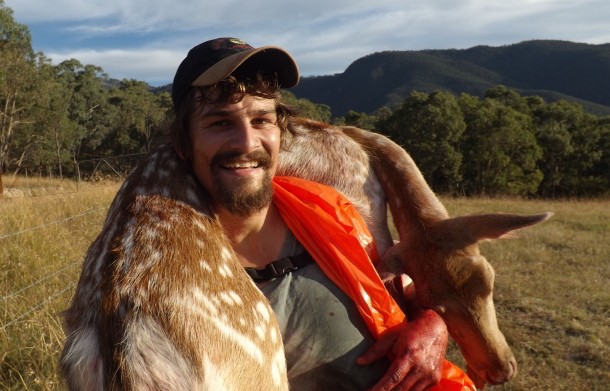 Wasting good food is senseless to me, and I’ve tried lots of different ways to maximise my kill and use the offcuts. Doing stews and making jerky can use most cuts of meat, but mincing is often the most versatile way to make use of everything. My mate bought a new mincer and some sausage-making gear a year ago, and on making our first batch we realised that we hadn’t just found a way to use up offcuts, but we had opened the doors to all kinds of gourmet potential.
Our early batches were made mainly of Sambar meat. We kept the recipes simple as we were focusing on getting the basics right. We found two things were important when starting out. First was getting the ratio of salt right; too little and it doesn’t help the meat last longer or give it flavour, but too much of course makes it overwhelmingly salty. I found that 1.5–2% salt to meat works well. The second issue was that venison is very lean meat, and if too lean a sausage will dry out very quickly when being cooked. So we had to add some fat, and for the first few batches we bought some pork shoulder from the butcher. Keeping it to a ratio of 80% venison to 20% pork, the result was delicious and still quite lean Sambar snags.
The following recipe I’ll share resulted from two separate hunts this year. My mate Dave had taken me to a property to hunt pigs in summer, and there had been plenty of rain in the lead-up to the hunt. What resulted was some nice-sized healthy pigs with plenty of fat in them. Dave told me he had often made a 50/50 venison, wild pork sausage, and with animals this fat,
I knew I had to try it. I had the pork frozen and two months later when deer season started, I headed to
a favourite fallow spot and took a beautiful spotty fallow doe. A great skin to tan but, more to the point, the final piece in my mixed game sausage.

First step in the process is to prepare the sausage casings. They can be purchased easily online or from specialty stores. I get mine from a home brew shop. They come in packets dehydrated and encased in salt, so they must be left in a bowl of room temperature water to return to their original form. After leaving them for an hour to soak , open up one end of the casing and hold it under a running tap till water has passed all the way through. During the soaking is the ideal time to get the mincing underway.
Before you start the meat should be semi-frozen. I like to defrost the meat for half an hour until is just soft enough to cut, then I break it into strips, which are thin enough to fit into the mincer. I also leave the mincer components in the freezer until I’m ready. The reason for this is if the mincer is working for too long things can easily heat up, including the meat. Warmth can allow the meat to become too mushy and risks the meat going off, and when cold the meat is far more workable.
Needless to say, ensure all kitchen surfaces and equipment are cleaned thoroughly before use and after.

The Mincing Process
Have the quantities of meat weighed before you begin mincing. Getting your measurements accurate is essential to getting spice and salt ratios right. If you are using two different meats or adding fat, alternate them when mincing so you already have a mix starting. Once all meat is minced, add the measures of salt, spices and herbs you’ve decided on, get gloves on and start mixing with your hands. It’s advisable to add a little cold water to help the mix bind together.
It should be a similar feeling to kneading dough and might take over a minute to ensure the mix is even. Once done, put the bowl/tray of mix in the fridge or freezer to stay cold before the next step.

Filling the Casings
Assemble the sausage-making components on your mincer or stuffer, which should have been chilled in the fridge beforehand. The casings, which you have soaked and flushed out, can now be fed onto the nozzle of the mincer. Be sure that you have purchased the right casings that fit the nozzle. To make this an easy process, spray the nozzle with canola or vegetable oil first, then pull the casings over the nozzle and keep feeding till you have a thick wad of casing, leaving about 10cm of excess casing hanging loose off the nozzle.
Next step is to feed the mincer with the mix, and having two people is a big help in this process. Mincers will come with a plastic muddler to safely push the meat into the machine, so have one person turning on the machine whilst the other keeps pushing the mix in. Once the mix has just come out of the nozzle, switch the mincer off and tie a knot in the end of the casing. Now the casing is ready to be filled completely, so have the assembly line ready and keep feeding that machine! Have the second person gently assisting the casing to come off the nozzle, making sure it fills evenly.
When you have a completely filled casing, tie a knot in the end and you’re ready to form it into the traditional sausage shape. Choose how long you’d like each snag, pinch it at the point you’d like,
then twist. You then pinch and twist until your rack of sausages is complete. Leave them for a day
in the fridge to allow them to set and cure properly before freezing them or frying them. Mission accomplished!
There are a million different recipes for sausages online, but there is also heaps of room for the creative outdoorsman to experiment with different flavours. Many sausage recipes include about 10% breadcrumbs, which helps both with binding the mix as well as increasing volume. Many different herbs, such as rosemary, parsley, sage and chives, work well with game meats. Also, the need to add a little water to the mix can be substituted with red wine or apple cider, which goes really well with pork. I’ve even heard of whisky being used – that’s the awesome thing with sausages – you can try new things!
By using a vacuum packer and freezing, I’ve had a regular supply of snags throughout the year and plenty to share with friends. They’re good enough to serve at a sit-down dinner, but also perfect for a quick feed around the campfire before a morning’s stalking the hills. Sausage making has helped lock organic game meat into my diet forever now and it’s a satisfaction all hunters can enjoy. No need to wait, get equipped and get stuck in!