Brendan Jones recounts why it always pays to  carry a gun in the bush, no matter what you’re doing.

I could see the reflected light glimmering  off the small dam through the trees. The wind was in our faces, perfect. I was taking the lead for reasons that will be made clear very shortly and Paul was directly behind me.I found a cattle pad that lead into the dam and followed it to avoid crunching grass and sticks under foot. We snuck (past tense of “to sneak” – Ed) the 100 or so metres to the edge of the trees and surveyed the open area….. Nothing.
I’d had high hopes as this was a dam we hadn’t been to before on this property. It wasn’t overly hard to get to; more hidden in plain sight sort of affair but after discovering it on the Google-machine we had thought it might produce. Maybe we were a little too late. The tropical NQ sun was heating up now, so perhaps any pigs in this area had moved off to find some shade to sleep the day away. “Lets go check out for any sign down by the water” I said turning to Paul. “You do that”, he replied, holding up a half roll of dunny paper in the hand that would normally be holding a gun, “I’m gonna go…” and proceeded to colourfully explain what he was planning on doing. I just laughed and we parted ways, Paul for the scrub-line and myself for the water line. I first made my way around to the other side of the water to the high wall that created the dam just to make sure there wasn’t anything worth shooting sitting out of view. Nothing.
I then made my way back to the side we had stalked in on to look for any clues. The thought of sending an airburst from the .243 over the trees in the general direction Paul had gone made me snigger. Might even help things along, no doubt. I found definite sign from pigs. Foot prints dried hard in the mud where the water line had receded. But they definitely weren’t from last night. In the softer mud there were a few more but they still didn’t fill me with enough confidence to camp out in ambush here.  Walking away from the water a little to a large log I could see the grass along one side was flattened. Maybe pigs, maybe roos, maybe cows. As I was pondering this I heard a yell. “PIGS! Oi, Pigs over here!!”  Classic. The reason Paul had a bog roll in his gun hand was cause his gun was back in the ute. The call of nature was such when we parked the car he had opted to forget about hunting in the short term and switched .243Win for 3-ply Quilton. Above: Stylish yet practical. This season’s must-have accessory for a toilet break in the bush. Calibre isn’t as important as having one full stop.

I started running towards where the yelling had come from. “Where are you?!” I yelled out as I ran. “Over here!” I narrowed in on the sound and burst through some acacia re-growth to find Paul bouncing round in circles like a Jack-Russel on meth. “What’s the go?” I asked. “ The big ones are gone but they left these behind”. Then I realised there were about 12 squealers disappearing in and out of the grass and bushes.
I dropped my pack and gun and joined in the chase. I’m always surprised at how nimble and agile little pigs are (also how unfit and out of shape I am). Before long we were both puffing hard and gave up on that. Paul explained he had been looking for a suitable spot to take care of business and had just about stood on a mob of pigs asleep in the shade in a stand of eucalypts. The mob had comprised of a couple of young sows, a big sow, some young pigs, maybe about half a year old, and the squealers  which I had seen. They all took off at half pace, waiting for the youngest pigs. Obviously the screaming back and forth and me crashing through the brush made them decide to cut their losses and they took off leaving the smallest of their number.
We laughed our way back to the car. In the last couple of years of hunting we struggled to count more than a couple times one of us wouldn’t have been within arm’s reach of a gun. Murphy’s law. 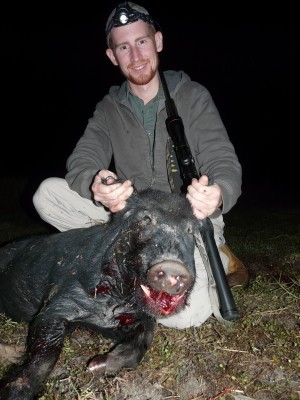 Getting back to the car, I started to get in when I noticed Paul walking off into the scrub again. “I still have to ….” he said, holding up the half roll. “Take a gun this time” I laughed back.