Marcus finds friendships forged on the hunt are for life.

It’s very difficult in these days of Facebook, websites and other instant media to hold onto an image long enough to make it news in print, like the red stag I recently hunted and dispatched with Ted Mitchell. If you frequent places like our website, AHN or other hunting and shooting-related e-media, you may have seen a similar image to the one attached. If I had grabbed Ted’s camera and ripped out the film canister (ha-ha) then I could have been assured of breaking this little story here. When Ted, who guided me on his access to deck this animal, which happened to be the best he’d ever seen on this block, wanted to break the story on AHN, his primary hunting communication tool, then who was I to tell him not to. Had I forbade him when he generously asked my permission, I’d have been a first class heel. 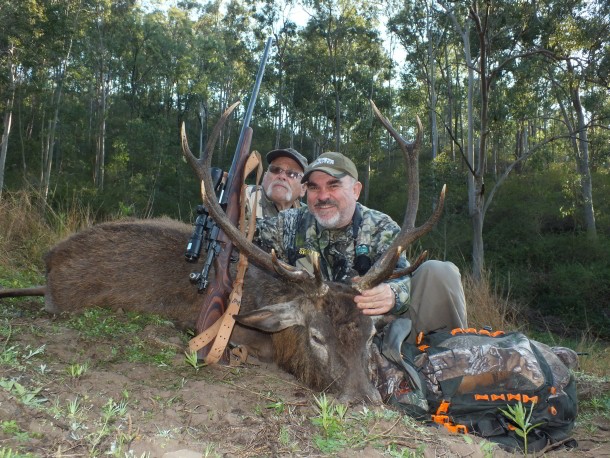 Anyway, I was going to shoot a scrub bull with my .308 smokepole with Ted, but they made themselves scarce when they heard I was coming ‚Äì yeah right ‚Äì so, as a last resort, Ted took me the following day up to his favourite block and after about an hour’s walk, poking our heads into a few gullies, this cracker 6×5 turned up grazing with three of his bachelor mates. Although I shot him standing with a hasty rest off a wobbly sapling at 180 metres, the length and heft of the M17 steadied my aim and release, anchoring him well. I walked on a cloud for a few days after that, let me tell you.

But onto the topic of this column. Readers will know that Ted suffered a catastrophic accident a few years ago and was on death’s door, with multiple fractures and in a coma for a few weeks, at the tender age of 70.

Now lesser men would have died or maybe retired¬†to a quiet dotage, with the odd walking-stick aided stroll around the garden. Not Ted. He is as near to superhuman as a man can be, carrying his injuries while humping about with pack and rifle in a ceaselesss succession of hunts. He left us to go on a month’s sojourn in the Territory straight after we parted company. He is cut of the same cloth as our beloved Nick Harvey, who recovered amazingly well after having his head mauled by a chainsaw years ago.

With all this activity and notoriety, Ted and his family are very unaffected and generous people. Characteristic of that generosity was Ted presenting me with his latest knife artwork, a beautiful little bone-handled caping knife he’d recently forged and crafted; in fact he apologised for not having time to make me a sheath for it. Now Ted has a history of extending similar generosity to other hunters with no public profile like mine, just because he thought they needed some mentoring and that they were genuine, good people.

I wish that I had started seriously hunting a generation earlier, because I feel that I have missed out on the sort of richness you experience from meeting great people like Ted Mitchell.

Ted, may you hunt forever and from my heart, thankyou.