Reid Hjorth is in turn tantalised and bitterly disappointed during his five month quest for a beautiful fallow buck.
My quest for a big fallow started after I shot my first buck on a guided hunt, which was my 21st birthday present. Fast forward 12 years and many hunts later, I finally realised my goal. To make things even better, I actually managed to do it on my 33rd birthday, it sure was a great birthday present.
The hunt for this guy started a few days before Christmas in 2013, while out looking for foxes on my deer block. I was in the paddock at first light, heading for an old cropping paddock to see what was still hanging around from the night before. Instead of foxes,
I spied eight bucks, all in varying states of antler growth. They wandered off the crop at first light and I followed them into the bush. I quickly closed the gap to about 130 metres for a better look and some video footage. After 10 minutes, something disturbed them and they came past me at only 50 metres, then were gone.
I packed up with a smile on my face and headed for home. My smile grew even bigger when
I viewed my footage on the computer – an unseen buck, most probably from behind a big downed tree, was caught on film as they all ran off and he was a cracker. I froze that footage on just about every angle I could, studying his antlers, he was easily the best buck I had ever come across. Well, that was it, I had to get that buck.
The deer season didn’t start for over two months, but that didn’t stop me from keeping tabs on him. The big fella and his mates proved elusive in January, but I did finally lay eyes on them on the 28th. My brother was with me on that day and we had a real challenging hunt to get within range of them for the camera. We got to about 150m and studied them hard. It was definitely the same mob with the big boys having grown out their top tines fully and what surprised me was how much the smaller buck’s antlers had grown in a month, they were now fully grown too, yet all were still in full velvet. Some more photos and video footage taken before the wind changed direction and the bucks were gone. The big fella was still there, his spellars had grown out and he was looking good.
Despite some serious searching in February so I could get the drop on him in March, he never showed up. March rolled around and apart from shooting a cull buck, not much happened on the big fella front apart from a brief sighting when he was on the property next door. The rut was just starting to ramp up and I saw the big fella being shadowed by a white menil buck with a good right palm, but a weak forky left which must have given my big boy a stabbing as the white buck had all the girls and my buck didn’t even try and fight back. He did take his frustration out on a poor spiker who didn’t get out his way quick enough, which was quite funny to see.
I took the first two weeks off work in April to try and pinpoint and hunt him again, but still no luck. At this stage, I was beginning to think that some other lucky hunter had shot him. I hunted every day for a fortnight in April, I saw plenty of deer, but no big fella. I couldn’t even see him next door, which I glass into, from a prominent hill.
The farmer’s son, who is my age, was beginning to wonder what all this deer hunting was about, or whether I was mad maybe! He came out with me at the tail end of the rut to see what all the fuss was about. We nearly walked straight into a two-year old buck not long after leaving the 4WD. The young fella had copped a towelling, as evident by his roughed up hide and the limp he now had. It was nothing serious he wouldn’t recover from, so we let him be, despite the normal “shoot on sight” reaction from the farmer and his son. The hunt for the big fella was more serious than that, the culling would have to wait until after the rut. As we neared the western boundary, I did my usual glassing next door, just to make sure. There, only 400m away over the fence was my big boy, casually rounding up his girls, numbering about 20 or so, which I was quite happy about.
I gave my binos to Andy so he could have a look and check him out. It didn’t take him long to realise why I was putting in so much time on this guy. Andy had never seen one this good and he works on the property nearly every day.
That damned boundary fence once again prevented me from getting a shot at him. He was so close, yet so far. Despite waiting him out for an hour or so, Andy had work to do, so I reluctantly left him yet again. 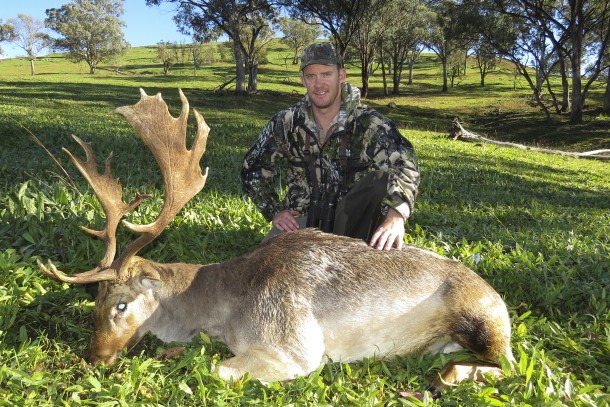 Finally on the deck after months of preparation; Reid’s beautiful trophy buck. 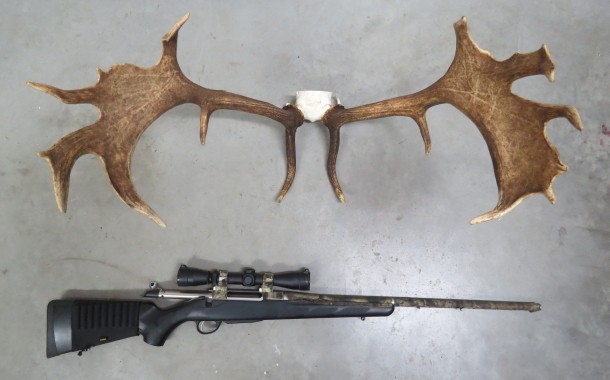