Well it had been quite a few months since Tony and I had got away together for a hunt but the planets aligned, I put work on hold for a few days during heinous deadline time and we were off to the Central West to meet up with the redoubtable Alex Juris to assist a grazier having problems with ranging mobs of billies all over a rugged couple of blocks covering 8,000 acres.

Starting at 5am for the drive from Sydney, we made Alex’s by midday, quickly lunched on the food of all champion goat shooters (Maccas) and were off out into the wilds. It had dried out considerably since last time and this day was a stinker, a humid 35 degrees that sucked the energy out of us, Tony and I being accustomed to air conditioned gyms and offices.

Alex had been out with a mate the previous week and had spotted, shot at and missed one of a pair of 35-inchers and we thought we were onto them again when we saw a wary mob depart from an open flat paddock up onto a scrubby hillside. We stalked quickly into a creek bed, observing a pair of weedy pigs shuffling around and bathing in small pools and then moving off. Alex took obligatory photos and then we breasted the other side of the creek and looked for a spot to give us a good view and shooting positions. I moved out into the blistering sun and crouched behind a fairly convenient rock. I say fairly because most of the time, rocks are sharp, too high or low, or the wrong shape. I made the best of this one, which seemed to have all the attributes just mentioned as well as a bunch of ants that soon made a meal of my nether regions. Yes, I was dressed in shorts again, but life is often a compromise.

We watched a couple of billies fade in and out of partial view behind low scrub between 100 and 150 metres away. Tony was ready to video the proceedings but it took a full half hour before the first brown billy gave me a shot from the shoulder-neck junction up. I lined up the old 4x Kahles crosshair at that junction, let fly and that’s where the Barnes 110gn TTSX took him, down for the count. At the shot the larger white billy started trotting across just below the crest of the hill and I racked another round into the Mauser’s breech, waiting for a good shot. It didn’t come, so I led him slightly and punched one into his mid body, then put another one into his shoulder, putting him down for keeps.

Going up to inspect the carnage, we realised that these billies were not the hoped-for  evaders from the previous week, rather an ordinary pair of males in good condition but nothing special in the horn department. Round about now, we’d been out in the heat for about 90 minutes and trudging around, holding still observing, stalking and sweating and Tony said, “Hey, I don’t feel very well, I have to sit down, I’m a little dizzy.” At that point Alex and I, who were feeling hot, but alright, swung into action wetting down Tony’s neck, getting some water down his neck and a Muesli bar for a bit of sugar to get some energy back. Ten minutes sitting in the shade and resting had Tony back on his feet and OK to continue. Mostly, I drag the chain behind Tony but this time the weather intervened.

It was LESSON 1. Before you go out in hot weather, drink water until you are almost uncomfortable, and keep sipping while out there. We mostly hunt together in cooler months and Tony lives by the rule of not drinking much water because fish do rude things in it. And to think, my January magazine editorial covered exactly this topic.

I’d noticed that I had sticky extraction with my handloads and was pondering the cause. I had run out of 110gn Barnes TSXs, which I had run with a maximum book charge of AR 2208 and they had performed beautifully on goats, fallow and pigs on a previous hunt. Well I couldn’t find any in the shops but my mate Rob gave me some 110gn Tipped TSXs to try out. All that I could find out from the web and book Barnes reloading literature suggested you could use the same loads with both. I put a total of five of those rounds through my Mauser and ejector marks on the case heads and one leaky primer (thanks Mr Mauser for the bolt shroud to divert gas and corruption away from the shooter’s face), so I opted instead to shoot some old handloads with Sierra 90gn Varmint bullets in them and I had no further problems. 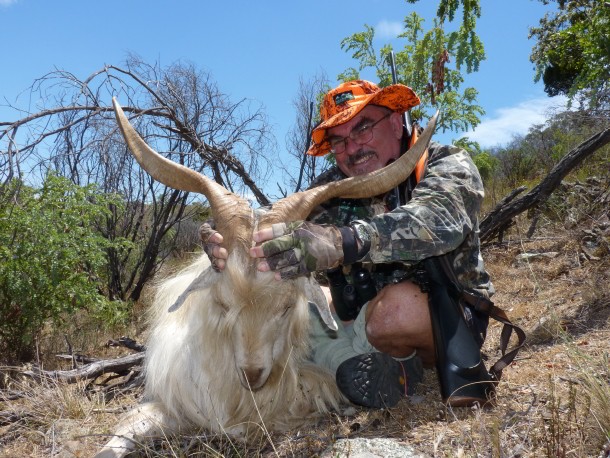 LESSON 2. It’s an old one but a goody. When changing any component in your handloads, work the load back up from at least three grains below. My haste could have been my undoing. I haven’t worked out what the problem was but my educated guess is that the Tipped TSXs may be of a harder alloy and have a longer bearing surface, but I have no more TSX bullets with which to conduct a comparison.

On we went for a further three days in similar weather, interspersed with the odd thunder storm, doing a lot of driving and intermittent stalks on many mobs which we spotted from the vehicle or from high places where we pulled up regularly to glass. All the time, we were attempting to locate the 30-plus billies, but it was pretty difficult due to windy conditions to hold 10x binoculars steady. As good as the optics on the Swarovski, Vortex and Steiner binoculars were, the goats were just too far away to accurately appraise them, until we had stalked much closer. I distinctly remember an incident I covered in a story called “Chandelier Billy” a few years back, where some other things went wrong and provided both Alex and me with valuable lessons, but one thing I had was my Nikon spotting scope and before we even ventured up into goat country three km distant and way up high, we had spotted and evaluated the billy I eventually shot.

LESSON 3. If you are going to be vehicle based, and covering wide open country, pack your spotting scope and a solid tripod; it will pay dividends.

Now by the time we were onto our last morning’s hunt, I had run out of .270 ammo, due to a couple of factors. First was I couldn’t use my TTSX handloads, regarding me balefully from the ammo box and secondly, because we were always out at dawn before the gunshops opened and we came home on dark. 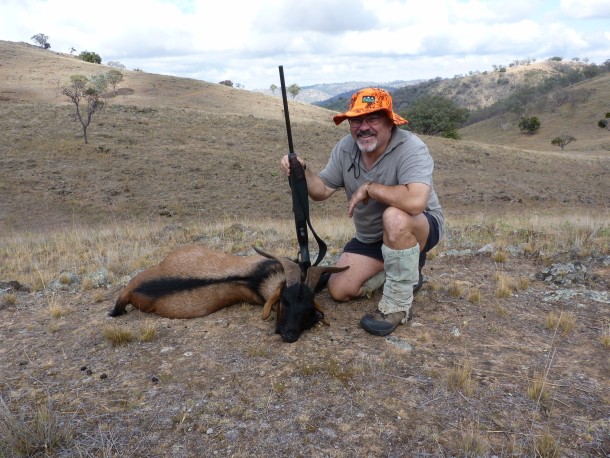 LESSON 4. I should have bought some factory ammo with me as a standby, or loaded sufficient cartridges to a known formula well beforehand in anticipation of a quick hunt popping up. Hindsight is a wonderful thing, n’est ce pas?

Consequently, I borrowed Tony’s Blaser R8 in 7mm Rem Mag and belted a few billies into the middle of next week with Tony’s standby Hornady 162gn Interlock load. Apart from not having enough ammo for my rifle, the last morning’s stalk, over about 1.5 km and 300 metres of altitude, went like the textbook said it should. The wind was perfect, we used cover and concealment perfectly after making a good stalk plan, we had good comfortable shooting positions nice and close to our quarry and the end result was good – two billies down and a nice chocolate-brown skin taken from a smaller specimen.

All in all, we shot in excess of 30 goats, (very happy cocky) mostly in ones or twos from mobs of billies only, but we also had one memorable stalk in on a mob of nannies and kids, taking packfuls of beautiful prime chevon in the process. It had been a target rich environment, we were tired but happy and all that remained was a pleasant drive through beautiful country and down the “Bells”, followed by freezer stocking, rifle cleaning and a nice hot bath.

Roll on the fallow rut and fox whistling season. We’ll have plenty of good ammo loaded and full water bottles.