With duck season only a week away our choice of spots to spend opening morning were very limited indeed. All of the swamps in the district, that had provided excellent hunting last season, were now bone dry. Even a good few of the local dams were starting to show the results of no rain.

Heavy rain in New South Wales was drawing our ducks away but we knew from recent scouting forays that there were still a number of ducks in the district. Blake and I finally decided to spend opening morning at a quiet little back-water that I know of.

On the Monday afternoon before opening morning we headed out to build ourselves a blind. Building the blind early in the piece saved us from having to do it early opening morning and it also gave the ducks that resided in the back-water time to grow accustomed to seeing it as they flew around. A small flock of black ducks pitched in and flew directly over the blind which was a bit of a confidence booster. By the time we were finished with the blind a few more small flocks had drifted in.

Friday night found us putting out our decoys and patching up the wind damaged blind in readiness for the start of the season the following morning. We put a good thirty decoys out, that many probably wasn’t really necessary but we were trying to give ourselves as much of an advantage as possible. Then it was home for a bit of sleep, even though it was a restless night, such is the anticipation associated with the opening of duck season.

Early Saturday morning found us at our blind and we were pleased to see that everything was still intact. In our time zone shooting can start at 7.20 am but although there was constant shooting going on around us at this time no ducks had ventured our way. A large flock of wood ducks came flying over the tree tops but as they were just out of range we held our fire. It was 8.00 am before the first duck came cruising into the decoys. An unfortunate teal had the dubious honour and as it cupped its wings and came cruising in it ran into a load of No 2 shot and plopped onto the water. We didn’t have a dog with us but the wind was blowing towards us and the teal slowly drifted in.

Shooting on the lagoon just north of us had us at the ready and, sure enough, a small mob of blackies came winging our way. They had a bit of a pace up and as I swung my lead through the back end of the flock and fired I was pleased to see one fold up and drop. Blake managed to pull one down as well which was pleasing to see. We had little time to pat each other on the back as more blackies were pitching in. I fluked a double out of this mob but one needed a finishing shot which was quickly administered.

Over the next hour or so we put a few more down, so during a bit of a lull in the shooting Blake headed down to the back of the lagoon to retrieve our downed ducks. Whilst he was there he put up a few small mobs of blackies that somehow managed to get under our guards and land in a stand of dead saplings. Lucky for me they came my way in handy regular intervals and I made short work of most of them.

I told Blake that I had spotted a pair of ducks a bit further down the creek and seeing that it was my turn to put them up I headed off after telling Blake to keep his eyes open as I was bound to put quite a few up further along the creek. The bush was alive with kangaroos and I herded them along in front of me as I headed towards the far end of the lagoon. 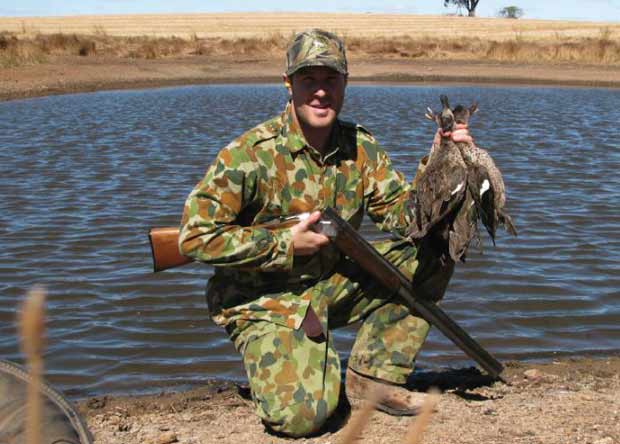 Most dams encountered had a fair number of ducks on them; Rhys is seen here holding a nice bag of teal taken off the dam in the background.

It didn’t take long to get there and I ran smack bang into a large flock of teal peacefully resting amongst the dying saplings in the middle of the lagoon. They were too far away to put in a telling shot so I fired a shot into the air to put them up and hopefully they would head towards Blake. At the sound of the shot the teal rose as one and headed straight down towards Blake. I waited a while listening for the shots but they never came. ‘He is probably having a smoke and the teal caught him off guard,’ I muttered to myself; ‘either that or he is fast asleep in the blind,’ I said to no-one in particular.

I had already covered a good kilometre so I decided to head back and along the way I put up other ducks, mainly pairs of blackies, which all headed down towards Blake who was now firing the odd shot. I even managed to score a blackie on the way back as it came barrelling down from Blake’s direction. When I reached the blind I asked Blake how many he got out of the ones I had driven down.

‘None,’ was the reply and the excuses came thick and fast. I just looked at him and said
‘You were probably having a smoke or were fast asleep in your chair and they got past before you were onto them.’ We both had a laugh then I spotted a blackie coming down the lagoon towards us at a fair rate of knots.

As I brought the Beretta to my shoulder the blackie was past us and heading away and it took a fair bit of swinging to catch up with it but thankfully I did and the resulting shot had the blackie fold up and flop down near the furthest decoy.

‘That makes number ten for me,’ I said to Blake, ‘I hope you’re a good swimmer, it’s your turn to be the dog.’ We hung around for a while longer then packed up and headed home for a bit of a rest, it had been a long day and tomorrow we planned on hitting the local dams after more ducks.

Other members of our hunting group planned on joining us and early on Sunday we all headed out the road to hunt a number of dams on private property that we had access to. The first dam we planned on trying was a fair way out into the paddock so we drove through the stubble to within 100 metres of the dam wall. There were about 50 wood ducks on the dam and they rose as one when we made our presence known. We all got off a couple of shots and weren’t the least surprised to see five wood ducks down at the end of it. With a stiff wind blowing it didn’t take long for the wood ducks to drift into the bank.

I am not that keen on steel shot but I have to admit the Remington Nitro-Steel 70mm in 34 gram loads of No 2 shot were doing a reasonable job so far. The wood ducks headed over to another dam so I thought I would wait on this dam in case they decided to head back this way, while the others headed off after the mob. However this was not the case this time and a short time later I saw them travelling back across the paddock to pick me up.

As we drove across the paddock heading for the next dam half a dozen quail exploded out of the stubble to the side of the 4×4.
‘We will have to remember this paddock when the quail season opens next month,’ I said to Blake, he nodded in agreement and said he would start looking for other paddocks while he is driving around with his dogs looking for foxes.

The next dam we jumped had quite a few wood ducks on it and I couldn’t believe we only put two down after we had finished shooting. Blake knew of another good dam and when we approached it we could see quite a few teal lining the banks. Luck was with us as the high dam wall on the north side concealed our approach and they were unaware of our presence until we were well within range. As they rose we all selected a duck and fired. Seven went down in the first volley and we quickly reloaded as they looked as though they were coming back. They circled the dam a few times but they were well out of range and they knew it.

They pitched in on another dam a few hundred metres away, all except one that is. It came back onto our dam and with the wind up its tail, it was really moving along. I gave it plenty of lead and fired, the pattern of shot catching it dead centre with the duck tumbling end over end, finally crashing into the high grass lining the dam bank. We went onto to do a few more dams with varied success and after having a quick count of the ducks already in the bag we found we weren’t far off bagging out. Blake knew of a dam that was apparently loaded with ducks so we made a beeline for it. His information was right on the button, there would have been a good 100 ducks of mixed breeds. We only got a couple here but put it in the memory bank to pay this dam a visit on another day, as we are bound to do better next time.

With the shooting over it was over to nearby stand of trees to field dress the ducks in the shade. It had been a great start to the season and with a bit of luck it will continue on.