In 1859 a bloke named Thomas Austin released 24 rabbits on his property near Winchelsea, Victoria. Although rabbits had been brought to Australia before this, it is this release that is widely acknowledged to have led to the rabbit scourge that has plagued the nation ever since. The story goes that Old Mate Austin reckoned letting a few bunnies go “could do little harm”. Whoops! It’s history now that rabbits adapted spectacularly well to the Australian landscape and currently occupy some 4 million square kilometres across every state. 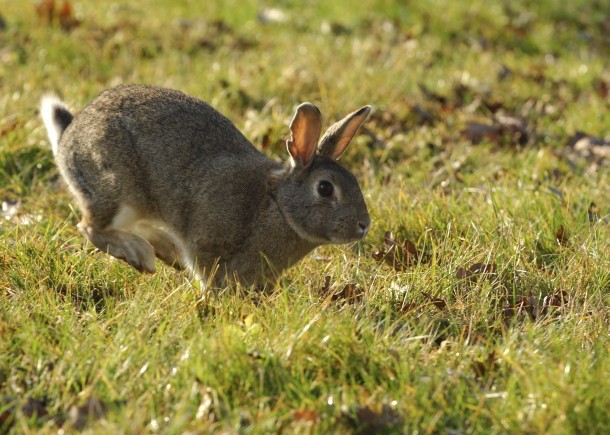 During more than 150 years of occupying what they clearly found to be the Promised Land, rabbits have been many things to many people. Most obviously, they are one of the worst environmental and agricultural pests in the land. Recent estimates show rabbits cost Australian farmers at least $110 million annually in lost production and control costs. At times, though, such as in the Great Depression when they earned the moniker ‘underground mutton’, rabbits have also been an important source of cheap and plentiful protein for Australia’s citizens. They have provided income for professional shooters who pursue them for their meat and skins. And who hasn’t heard of the famous Akubra hat, made from the hair of wild Australian rabbits? Don’t forget, though, that rabbits were originally imported into this country to provide sport for hunters, a role they have also fulfilled with distinction. Hopefully this article will provide some hints for hunters looking to partake of such sport!

Where to find them
If you want to find rabbits, head for areas of lighter, sandy soil. Rabbits usually favour the sand because it is the most suitable ground for them to establish their warrens in. In turn, warrens are most commonly located in and around tree belts, underneath fallen timber, along fence lines and beside farm buildings, silos or hay stacks. Anywhere that consistently avoids regular cultivation will eventually attract the attention of home-building conies, especially if alongside pastures or crops. Seek out such locations first in your search for heavy concentrations of bunnies.

Rabbits can also sometimes be found living on the heavier grey clay country alongside creeks and rivers. Such river country is not only harder to dig in, but the frequency of flooding often precludes the establishment of permanent burrows. In such situations, rabbits often occur as above-ground populations that find shelter in hollow logs, or beneath heavy vegetation, rather than in holes in the ground.

When searching for rabbits, learn to assess whether warrens are inhabited or not.  Freshly turned earth at the entrance with clear footprints are good signs.  Likewise, look for dung mounds and shallow diggings in the vicinity.  These signs will give you confidence that there will be bunnies about when you return to hunt them later.

Best times
As with many species of game, the best time to find rabbits is around the change of light at dawn and dusk. During the two hours before dark, you may well find bunnies sitting near their burrow entrance, sometimes high on the earthen mound, enjoying the sunshine.

If they haven’t been hunted much, they’ll often squat there until they figure out what you are, by which time you may have already put a bullet in them. The same applies early in the morning, except that you’re also likely to catch rabbits a little further from home as they make their way back from a night foraging in the paddocks.

Of course, with the aid of a spotlight at night, you’re in with a chance of finding rabbits just about anywhere. Under the cover of darkness they throw caution to the wind and leave the sanctity of their burrows far behind.

The proper way to hunt rabbits – or any animal for that matter – is by stalking them on foot in daylight. Using all available cover to sneak within range while monitoring the wind direction to avoid detection (always approach from downwind) is very satisfying even with small game, not to mention great practice for honing your skills ahead of your next big game hunt. This is especially so for kids and junior hunters – there wouldn’t be too many Aussie hunters who didn’t start their hunting careers chasing rabbits.

The technique that my three sons and I use most frequently to get amongst the rabbits, however, is known as ‘car stalking’. OK, I made that name up, but it’s a term that’s designed to indicate that we’re not on foot, but we’re not spotlighting either.  In simple terms we’re driving around likely areas of the farm looking for rabbits at dawn or dusk. When we find them, we shoot them out the front passenger seat window. I’m a big fan of this technique for one main reason: it’s great for teaching young kids to shoot. I have a ‘Big Iron’ shooting rest that I attach to the outside of the passenger door that provides a solid rest for the boys to shoot over.  Then, with the shooter sitting securely in the passenger seat, the barrel of the .22 can be pointing out the open window with no chance of it being inadvertently pointed in an unsafe direction. At all times the shooter is within arms’ reach, I can issue instructions easily and clearly, and I can see for myself whether the bolt is up and safe, or down and dangerous. I find the whole procedure so much safer than having kids in the back of the ute.

An extension of ‘car stalking’ is spotlighting. When spotlighting with my kids, again, I far prefer to have the shooter in the passenger seat shooting out the window. Then I put the spotlight operator in the rear passenger-side seat, behind the shooter and out of danger. Sure, you’re limited to only shooting out one side of the vehicle but it’s a much safer situation than having the shooter in the back. Having inexperienced shooters in the back of a moving vehicle with loaded firearms, in the dark, with nothing to hang on to and no proper way of communicating with the driver, is just a dumb idea.

There is one exception to the dawn and dusk rule detailed above, and that is when shotgunning rabbits. The old scattergun loaded up with number 4 or 6 pellets makes perfect medicine for rabbits on the run. If you’re able to find a place where rabbits are holed up above ground in thick patches of cover, and you have a good dog to kick them out of bed, it doesn’t matter what time of day you hunt.  Great sport can also be had using ferrets to flush rabbits from their warrens and rolling them with a shotgun as they rocket for safety.

Lastly, we have the varminting brigade.  These are the guys who, armed with flat-shooting, small calibre centrefire rifles, set themselves up with a commanding view of a well-used warren, and wait.  When an unsuspecting rabbit emerges, these guys love nothing better than stretching the barrel of their finely-tuned outfits to see just how long a shot they can make.  It is a highly technical hobby, involving range finders, spotting scopes, and a better-than-average understanding of the trajectory characteristics of their lovingly assembled home loads. If the truth be known, varmint hunting is more a test of marksmanship than hunting ability because the sniper is well outside the animal’s zone of awareness.  It is an expensive way to shoot rabbits, too, but these ballistics buffs don’t mind that. 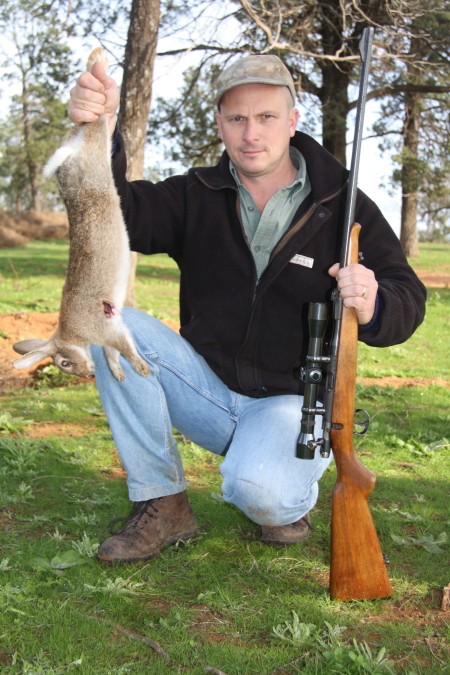 Martin Auldist with a rabbit from the Riverina destined for the pot. The rifle is a Brno .22 LR.

Rabbits have been shot with every calibre of firearm ever brought to the Australia, from air rifles up to the .375 H&H magnum and beyond.  Out of the three million or so registered firearms in Australia, there wouldn’t be a single one not capable of dealing to the humble bunny.  Nevertheless, some are more suitable than others.

Top of the list is the .22 long rifle (.22 LR). Amongst rabbit rifles, the .22 LR is the undisputed King.  Just like many hunters learn their hunting skills hunting rabbits, most shooters learn to shoot with a .22 LR. They are light to carry and pleasant to shoot, with little or no recoil generated by the tiny cartridge.  Loaded with 40 grain pills they have plenty of knockdown power for rabbits at sensible ranges, and fitted with a telescopic sight they are deadly accurate.  Hunting “twenty-twos” are cheap to buy and cheap to feed, with ammunition costing only around 10 cents a shot. The major drawback with the .22 LR as a rabbit rifle is its limited range: for general-purpose, walkabout rabbit hunting, keeping the range to less than 50 metres is sensible.

Other rimfire options for rabbits include the .17 Hornady Magnum Rimfire (.17 HMR)  and the .22 Winchester Magnum Rimfire (.22 WMR). Both these calibres share many of the benefits of the .22 LR, being similarly pleasant to fire and light to carry. Their big advantage, though, is the extra range compared to the .22 LR. Generally speaking, both can be relied on for rabbit-busting accuracy out to at least 100 metres. The down side is that ammunition is substantially more expensive, especially for the .17 HMR with its tiny 20 grain projectiles.

Those rabbit hunters interested in getting into varminting could consider small centrefires such as the .17 Hornet, .204 Ruger, .223 Rem and .22/250 Rem. Collectively these calibres fire projectiles ranging from around 20 grains (.17 Hornet) up to 60 grains (.22/250 Rem) at high speed, giving a flat trajectory and the capacity to shoot long distances.  Rabbits at 200 metres, and in some case far beyond, would be easy meat for accomplished varmint hunters using these types of calibres. Because little walking is involved in this long-distance rabbit hunting, many of these small centrefires are available with a heavy barrel that resists recoil and facilitates a rock steady rest. Add a bipod and a high quality telescopic sight of at least 10 X magnification, and you’ll have the perfect set-up for taking maximum advantage of the long-range capabilities of these rifles.

Rabbits can make a tasty meal when prepared correctly. Older readers will recall tough economic times when rabbits were an important supplement to the diet of many families – I recall such stories being told to me by my grandmother. These days, rabbit has become a much more trendy source of meat, sold in supermarkets and fancy restaurants alike.

There are many different ways to prepare a rabbit for the table. The method I use was shown to me by a shearer from Deniliquin when I was a kid. Interested readers can find a photographic guide to skinning and butchering rabbits on our website HERE.

There are many different ways to cook rabbits including baking, frying, roasting and casseroling, and many cookbooks have rabbit recipes for you to try. I have published my favourite rabbit casserole recipe in a sideboard hereabouts to get you started.

So there you have it – my two bobs’ worth on how to round up a few more rabbits next time you get the chance. They’re a common game species that is widely available, easy to find, cheap to hunt, great in the pot…and by shooting them  you’ll be doing the farmer a favour as well. What’s not to like?