The day after Boxing Day last year was fairly overcast and cool. Bumming around the house and annoying my wife just wasn’t doing it for me and when she suggested I should fix a torn fly screen I got an urge to go fox whistling. My beloved wife seemed happy enough to have me out from under her feet and I was happy to not fix the fly screen.

So, I grabbed my lucky camo fox whistling shirt and cap, rubbed my lucky fox whistling five-cent coin while I mumbled a little prayer to the lucky Fox Whistling God, grabbed a Silva Fox Whistle and off I went. I’m not very superstitious when it comes to hunting and fishing. Ah, ha ha ha! Alex Dounis has whistled up over 80 foxes near his home in Sydney.

I drove the short distance to a spot that I’ve whistled successfully in the past and parked my truck, put on my lucky shirt and cap and wondered why I didn’t bring a pair of boots and socks? Doesn’t matter, thongs are good! I put my whistles/calls in my pocket and off I went. It was just after 5 pm, overcast, cool and a light nor’easter licked my face — Perfect! I hadn’t walked ten metres when I spied a couple of rabbits around twenty metres away grazing on a grassy clearing; this was another good sign. I followed a fence line, stopping at a gate about twenty metres from a clump of tea tree and blackberry bush. The breeze was still on my face and carried the distinct and unmistakeable scent of Vulpes Vulpes, so I sat and got comfortable at the gate post. There was hardly any cover but it was good enough. I mouthed a call I use when I believe foxes may be within a couple of hundred metres and blew a soft and short whimper, waited about ten seconds and did the same again. Next call I did the same with a little more urgency.

A young cub popped out of the clump and came straight towards me stopping to study me from less than four metres. I blew a soft desperate death rattle hoping it may approach a little closer, which it did. Only a few steps, but closer none the less. Meanwhile, back at the clump, two more cubs appeared and bounced over to join us. Surely they were all siblings from the same litter. I was delighted! It’s moments like these that make fox whistling so appealing. Irrespective of the damage foxes do, in my eyes they are a beautiful little animal and the cubs, like all puppies, even more so. Anyhow, these little cubs showed little if any fear and were quite content to just hang around and play fight as they do. I took my phone from a pocket and just as I got them central within the frame the thing rang! I couldn’t believe my misfortune. I hadn’t switched to silent mode and my ring tone is an alarm like a Klaxon. Well, they didn’t run off but they did move away and separated, ruining the shot and the bloody phone kept ringing. I finally silenced it but it was too late. What could have been a brilliant photo is but a memory. Oh well, doesn’t matter, doesn’t matter! I sat and watched these little creatures playing as all puppies do till they wandered back to where they’d come from and were gone. I got up and moved on too, the pleasure of the experience outweighing the disappointment of the missed photo.

A couple of hundred metres down the track I made myself comfortable and inconspicuous in the shade of a tea tree on a slope overlooking a decent size clearing skirted by more tea tree, blackberry and bitou bush. Again the breeze was in my favour and as with the last spot I used the same call and same sequence with each call a little more urgent than the last. One thing I’ve learned when fox whistling is to expect the unexpected. One would presume that should a fox approach it would from up wind. Not always! I’d called four or five times over a couple of minutes and, in close like I was without anything stirring from the scrub in front of me, I was about to move on when I looked over my left shoulder for no particular reason.

An adult fox, perhaps three metres away, ran past at pace, gave me a quick glance as it went, and disappeared into the scrub I would have expected him to come from. Cheeky thing must have been coming to me and spooked when I turned around. It wasn’t the first time and certainly won’t be the last. I think older wiser animals will sometimes skirt you and approach from downwind to catch your scent. On the odd occasion I’ve been able to whistle a fox back into the open after its taken cover, though seldom. I blew a drawn out raspy and urgent death rattle and waited without any confidence it would reappear and it didn’t. I did the same again and had a chuckle to myself when three little fox cubs idled out of the blackberries a couple of metres and ignored me and my whistle. They played as they do and didn’t give me a second glance. Unfortunately they were out of iPhone camera range and no doubt the same three I whistled up earlier. I watched them for a while and figured I’d call it a day. Then again it wouldn’t do any harm to whistle just one more spot. 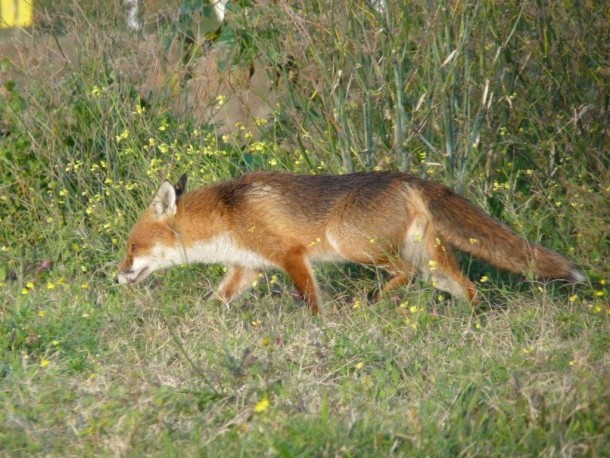 This fully grown fox trotted by at a distance of 3 metres.

I walked a few hundred metres to an open spot with a Tee junction on a dirt track and an embankment with thick cover to one side, my left and open ground beyond as you may see in the photo. The only cover I had was the embankment and I didn’t try to conceal myself. The call I’d been using was working well so why change? The breeze was still in my favour and I went through the same call routine. I’d only blown a couple of whimpers when the fox cub you see in the photo ran from around the embankment and stopped four or five metres from me and we just looked at each other. As with all young cubs it showed no real sign of fear and was happy to pose as I took a couple of photos. After a couple of minutes I blew a soft and short whimper hoping to draw it closer and it obliged me. It followed the embankment and I lost it for a moment only to have it pop its head up a metre from where I stood. I was thrilled and snapped a few more photos, then it walked off one way and I another. I looked back and I saw it sitting, looking in my direction about fifty metres out. I strolled back to my truck and it was just after 6pm.

I’ve passed many an hour this way over the past few years, and looking through my diary I’ve whistled up over eighty foxes in and around my home in Sydney.