Barry just after he achieved the bestgroup he’s ever shot (3 shots in 0.7”) from an Arctic Fox scoped.303 Enfield.

A recent trip to the Silverdalebenchrest range gave me the opportunity to test a nice little opticthat has multiple potential uses. The Arctic Fox SKS 4×21 riflescopeis only 180mm long with a 30mm alloy tube and ocular and objectivehousings of 35mm, making for a most compact unit. Made in PRC, thescope betrays nothing of its origins and its simple nature augurswell for long-term durability.

Close-up of the compact 30mm 4×21 SKS riflescope, ideally suited to mounting on Enfields and other similar vintage military rifles.

The 30mm bearing surface for attachmentof scope rings is 100mm long and when the turret housing is takeninto account, this leaves limited fore-and-aft movement foradjustment for eye relief. Nevertheless, when the unit was mounted onmy No4 .303 it was fine due to the single low power of the scopemaking eye relief not so critical.

Adjustments on this scope are unusual,in that they are nominally I MoA per click for windage and elevationwhile the low elevation knob is uncapped and finger adjustable andthe windage knob is capped and slotted and adjusted with a flat-headscrewdriver or coin. Elevation adjustment runs out at a nominal 55MoA while the windage seemed to be almost unlimited, going on fortens of revolutions in one direction. In testing at the range, Ifound that one click moved closer to 1.5MoA for elevation andslightly less than 1MoA for windage. The arrow indicating directionof elevation change was in reverse of what it actually provided whilethe windage guide was correct. That matters little as long as youremember that anticlockwise movements of both turrets willtake your MPI up and right, in common with almost allriflescopes. Adjustments were consistent and the scope held its MPIreliably once adjusted. There was no indication of any backlashproblem; once adjusted, the bullets went where they should havewithout any need to catch up..

The reticle is a bit uncommon thesedays in that it is the NATO pattern. This reticle provides holdoverhash lines of equivalent spacing down the vertical crosswire and anumber of graduated hashlines in the bottom of the field which givethe practised user gauges for measuring range by subtention usingobjects of known height. Suffice to say that I used to know what theyall meant and you can google the instructions, but why do it when youhave a reliable elevation turret that’ll take a .303 from zero to1,000 yards. To aid in any multi-range scenarios, the objectivehousing has a parallax ring that goes from 7.5 metres to 300 and theninfinity, certainly an unusual addition on a cheaper, fixed 4-powerscope.

The SKS’ feel and appearance are veryimpressive for an economically priced scope. It is fairly heavy forits size, indicating a thick-walled tube, which indicates that itshould be rugged, all things being equal. It is finished in dullblack anodizing and movable controls are all positive and smooth,without any evidence of looseness or inconsistency.

In order to mount the scope, I usedArctic Fox’s No-Drill mounts for No4 Enfields. They are ingeniousand effective and, unlike the S&K mounts that I imported at muchmore expense from the USA, these have windage adjustments in themounts, something I really didn’t require due to the huge windagelatitude of the scope’s adjustments, but no doubt handy if you arehandicapped with another scope with less latitude. Although I had touse a half-round file to relieve a mil’ (same needed to be donewith S&Ks) or so from the underneath of the mount to allowremoval of the rifle bolt, attaching the mounts was pretty simple,using grub screws and the allen key supplied. Bolting on a set ofArctic Fox 30mm Weaver-style rings then allowed the scope to beroughly aligned.

From the outset it was obvious thatmanufacturing tolerances of wartime Enfields make a perfect “go outand shoot it” zero unlikely to be achieved. Due to the scopepointing too high, I put a piece of clear plastic 10-thou’ shim inthe top of the front ring to allow the bottom of the elevation clickadjustments to give me a 100 yard zero using my 174gn Sierra MatchKing handloads. This would allow me to shoot the rifle way out to 1,000 yards with the elevation adjustments alone, thereby making aversatile outfit. As the rifle had proven capable of hitting astationery clay target at 800 yards consistently when zeroed in thepast, this was not a pipe dream.

The optics, while not in the highGermanic realm, were quite clear and crisp, certainly good enough forthe type of task for which it was intended and, as it happened, theywere more than good enough for getting the most out of a highlyaccurate .303. In practice, I found it better if I focused the rearfast-focus eyepiece (a nice feature) until the reticle was crisp andthen adjusted parallax, disregarding the range scale, but it waspretty close when I looked anyway. Then, we just plugged away.

A succession of groups shot from thebench by the author and mate Barry, showing you are not handicappedby a fixed power 4x scope when after small groups with an accuraterifle.

Once we had a workable 100 yard zero, Ifired three, three shot groups off the bench and then handed therifle to my mate Barry, who had just started target shooting lessthan a year ago at the tender age of 58. The rifle/scope combinationaveraged sub-MoA with Barry shooting his best group ever (.75-inch),with anything he’d ever tried. 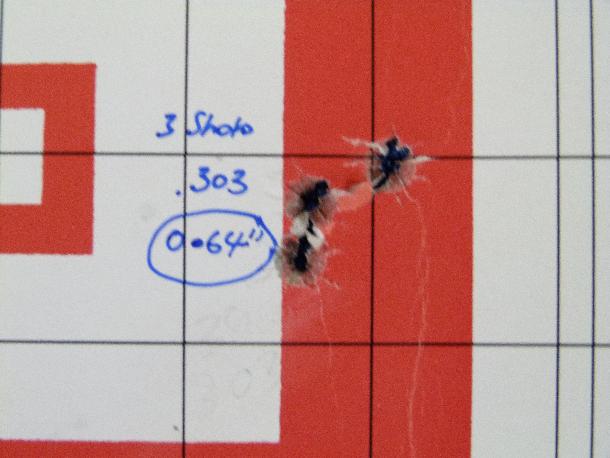 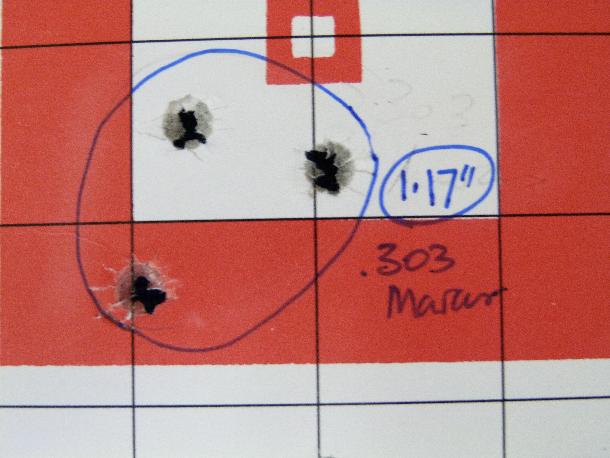 In all, I found the whole experiencewith the scope, mounts and rings to be a pleasant one, because itachieved good range results while involving a small amount of DIYalteration that any trained monkey could do. At around $150 for thescope, $40 for the mounts and $30 for the rings, why do you need tospend more to get your military rifle shooting to its potential?