The Kimber 84L has slender lines for a long-action turnbolt rifle designed specifically for the .30-06 cartridge.

Offered initially in .30-06, .270 Win. and .25-06 Rem., it is tailored to eliminate any unnecessary bulk, by paring off a lot of weight and making it easy to carry in the field. Its slim lines and lively balance make it fast to mount and aim, while a classic French walnut stock makes it a thing of beauty.
The long-actioned 84L is based on the petite Model 84M action lengthened 13.20mm to handle the .30-06 family of cartridges. The 84L’s receiver ended up 211.15mm long and only 29mm in diameter. The cylindrical dual-lug bolt has a diameter of 14.75mm and is 166mm long. The bolt body has two gas vents in its underside and one on the right side of the receiver ring.
The bolt has a Mauser style claw extractor some 476mm long and 9mm wide. The bottom of the bolt lugs ride in raceways, actually rails machined on both sides of the inside of the receiver which reduces binding and limits any wobble when cycling the bolt. The spring-loaded ejector is pinned in the bottom left side of the receiver. Pressing back on a grooved bolt release positioned on the left rear of the bridge allows the bolt to be removed.
The blued bolt handle has a smooth knob and is threaded into the bolt body. There’s a three-position wing safety on the bolt shroud a la Model 70 Winchester. The adjustable single-stage trigger on my sample broke at 1.8kgs as it came from the factory. Let-off was crisp, and totally inert with no creep or backlash.
The rifle, a Kimber Classic Select model features a French walnut stock with plenty of figure, an ebony fore-end tip and blued steel grip cap. Borderless checkering on the gently curving semi-pistol grip and fore-end runs about 20 LPI and the diamonds are sharp and evenly spaced. The fore-end is round in cross- section and the comb is high and straight, lacking a cheekpiece. The butt is fitted with a 15mm thick Pachmayr Decelerator recoil pad set off by a black spacer, and Q/D sling swivel studs are standard.
The magazine has a hinged floorplate with the release in the front of the trigger guard Oberndorf-style. The follower is black polymer and tension for the magazine is furnished by a blue steel “W” spring. The magazine box is blued steel sandwiched between the action bottom and the bottom metal. The magazine holds five .280 AI cartridges. Exterior metal surfaces have a matte black finish. 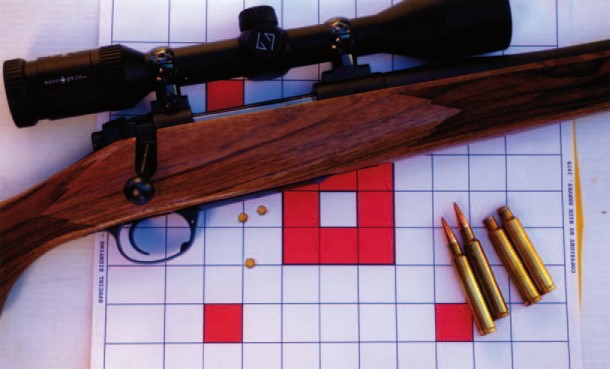 The 600mm long 4140 steel barrel has a semi-match-grade chamber, 6-groove rifling with a 1:9-inch righthand twist and recessed target-style crown. It measures 26mm at the receiver and has a light sporter contour tapering to a slim 14mm at the muzzle. To enhance accuracy, the action is bedded as is the recess for the recoil lug, a separate piece that is collar mounted during assembly. It measures 47.75mm wide and 22.25mm thick. Both front and rear action screws are pillar bedded, and the aluminium pillars are glass-bedded into the stock. This then, is the light weight, slender, elegant sporter built on classic lines that Kimber has chambered for the .280 Ackley Improved.
The weight of 610mm barreled test rifle in .280 Ackley Improved was 2.84kg, naked; equipped with a 3.5-10×44 Zeiss Conquest scope, Leupold bases and rings, it tipped the scale at     3.2kgs – less than most comparable factory rifles without a scope.
Designed by legendary gunsmith-wildcat-experimenter P.O Ackley, the .280 Ackley Improved (AI) duplicates the performance of the 7mm SAUM and 7mm WSM, but doesn’t quite equal the 7mm Rem. Mag. It does this in a standard rimless case with less propellant and in a standard action with 5-round capacity. I’ve never been a fan of improved cartridges but then Nosler legitimised the .280 AI and began supplying loaded ammo and unprimed brass for it, shooters no longer had to fireform cases and handload. When Norma began offering loaded ammo and brass, it did away with my main objection to improved cartridges.
Two 50 boxes of Nosler Custom Brass accompanied the Kimber 84L. I’ve used this brass in at least half a dozen cartridges now, and it’s as good as you can get. Not only is it high quality but it comes already “prepped” including chamfering of the case mouths and it’s packaged so that the mouths are round and ready to have bullets seated. All I had to do was seat a primer, throw powder charges and seat bullets.

If you wish to see the full test report with tables and accuracy report go to this this PDF file.