This latest M77 variant is distinguished by having a removable radial-port muzzle brake which can be detached and replaced with a dynamically-matched muzzle weight which will not change the bullet’s point of impact for a given load. Or, alternatively, the brake may be replaced by an unobtrusive thread protector which once fitted, is hard to detect.
The M77 action has undergone very little change mechanically in recent years, but basically there’s nothing new about the Ruger M77 bolt-action, a Mauser derivative, which made its debut in 1968/69. Over time the rifle has undergone a number of minor modifications, mainly improvements, which made today’s the current Ruger Hawkeye more capable than ever. When it was introduced, despite having the long Mauser claw extractor, the M77 was a push-feed action, but later when the M77 Mark II came along, the larger calibres had the bolt face modified to give controlled-round feed, while rifles chambered in smaller calibres remained push-feed. However, public opinion influenced Ruger to change all M77 Mark II’s to controlled-round feed which is theoretically more reliable. 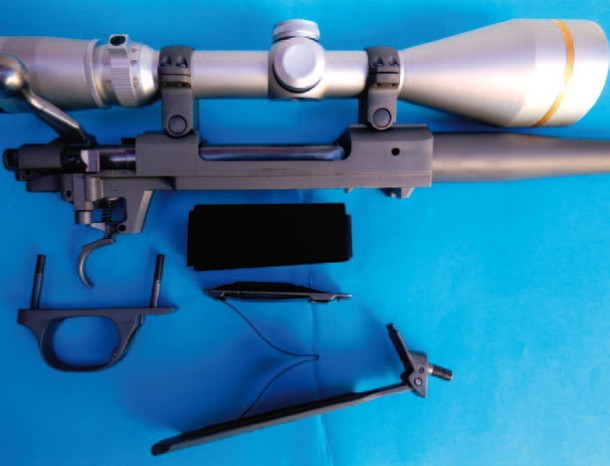 The original sliding tang safety was dropped in the M77 Mark II in favour of a pivoting, three-position wing safety integrated into the right side of the receiver tang where it is just as handy to the shooter’s thumb. When the safety lever is rotated to the rear, it presses on a plunger that locks the bolt handle down, preventing it from lifting if it gets snagged on a branch or some other object. The safety lever also engages a slot in the cocking piece, preventing it from moving forward.
Rotating the lever forward allows the bolt to be cycled, but the trigger remains locked. This allows the magazine to be emptied by cycling rounds through the action. Moving the safety fully forward puts the rifle in firing mode.
The old trigger has been replaced by Ruger’s new LC6 trigger for a “Light and Crisp” let-off. On the test gun it averaged 1.6 kgs with just a hint of creep. It is not adjustable, but a gunsmith could smooth it up. All of my own rifles have a 1.36kg pull, but the 1.6kg trigger on a big game rifle like the Magnum Hunter is near perfect. A trigger that’s too light can be a wee bit touchy if you’re in a stressful situation or when your hands are numb from the cold.
The original M77 magazine catch is retained. It is recessed in the front of the trigger guard and is pressed to release the rifle’s steel floorplate which carries the Ruger name and eagle logo etched in silver.
As well as its Mauser heritage, another thing that traditionalists like about this rifle is its all-steel construction – no alloy or plastic parts. The receiver, bolt and other vital working parts are investment-cast of chrome-moly alloy steel (4140 AISI), the ultimate tensile strength of which is rated at 175,000 psi – the strongest steel alloy ordinarily available for commercial use. 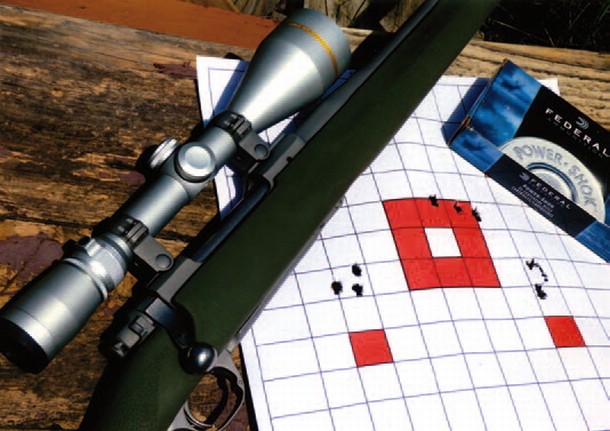 Not only is the M77 a strong action, but it was designed to safely handle escaping gas from a ruptured case. The M77 has proven design features that minimise the flow of gases to the rear; the right side of the receiver ring carries a gas-escape port; and any gas that might find its way back along the locking lug channel in the receiver’s left sidewall is blocked by a sturdy bolt stop and vented by a special opening. In addition a substantial flange on the bolt shroud acts to deflect any residual gases which might make it to the rear as the result of a defective cartridge case.
The M77’s long Mauser ‘98-type extractor, has never been surpassed for reliability in a bolt action rifle. A big advantage of this type of extractor is the reduction to
an absolute minimum of cartridge head protrusion from the end of the barrel; the major portion of the heavy web section of the cartridge
is enclosed in the barrel.
For added strength and safety, the bolt handle and bolt are of one-piece construction. It is not like so many other bolts, a separate piece brazed onto the bolt body.
Besides its great strength, the M77 receiver has another valuable feature; integral scope mount bases that accept Ruger steel, tip-off type scope rings.
A pair of rings are furnished with each M77 rifle and they form a strong and rigid mounting system second to none.
Ruger also uses an innovatory method of attaching the stock to the barreled-action. Instead of the usual vertical stock bolts Ruger uses a diagonal front mounting bolt of heavy section that pulls the barrel receiver section backward as well as downward against the recoil shoulder of the stock. This eliminates the kind of lateral movement of the action/barrel assembly that’s common in many bolt-action rifles. So you can be confident that the stock bedding will remain the same, no matter how often the stock is removed – an excellent system.
The Hogue OverMolded synthetic stock is well-designed, well- proportioned and has a nice “secure” feel about it. The rubbery surface ensures you will not lose
a firm grasp of it if its raining or our hands are sweaty. When I first used the Hogue stock on on an M77 Alaskan in .375 Ruger I was wary of the tightly curved pistol grip, thinking it was not the best shape for a heavy recoiling rifle. I thought it should have been more open, like the walnut stock on the Hawkeye African model, but I found out I was wrong after I sighted the gun in and took it on a buffalo hunt. The grip angle worked out fine and the stock absorbed recoil like nobody’s business, making the .375 Ruger quite pleasant to shoot.