The yellow eyes lit up brightly in the beam of the spotlight. As the ute slowed to a stop I closed the bolt on the .223 and looked through the scope to confirm the target. Sure enough, a fox was looking back at me, transfixed by the light. Settling the crosshairs on his head, I squeezed the trigger and heard the satisfying thud of a. solid hit.

Some may call spotlight shooting unsporting, but there can be no denying that it can be very effective when pest species become too numerous and their numbers need to be reduced. Fair chase and sporting chances don’t apply when a farmer’s livelihood is at stake, and spotlight shooting of feral species with nocturnal habits is an excellent way of dealing with vermin. It is also a much more humane way of dealing with the problem than poisoning. If you are going to employ this method there is some equipment needed and techniques used that will help to make your pest control expeditions as efficient and productive as possible.
Probably the most useful accessory that I employ is a bipod when shooting from the back of the ute. It allows a rock steady rest and precise shots can be taken with confidence. If shooting alone, try to use some sort of rest such as a door mounted rack or one of the commercially available soft foam types.
When doing anything at night it is always useful to have some illumination on the task at hand and that includes spotlighting.
I never go out without my LED head torch. Whether it’s reloading a magazine, checking the chamber or opening a gate latch, a head torch puts light exactly where you need it; right in front of your face.
I also always carry a compact but powerful LED torch in a pouch on my belt. This is especially useful when searching for downed game in long grass or shadows where the spotlight can’t reach. There have been plenty of times when I wouldn’t have been able to find an animal without my torch.
Another handy item is an LED work light. I made a square base for mine and wired a cigarette lighter plug to it so that I can sit it on the tailgate of the ute and direct the light to where I need it.
I find it handy when skinning and preparing game at the end of a session and it also provides a good flood beam when I want to take some photos in the dark. The reader may notice that everything I use is LED and that’s because I find it the best option. A nice white light and minimal battery drain makes it the best choice in my opinion.
If we are out chasing foxes I always have my button whistle on a string around my neck to entice any wary predators within range. The Scotch predator caller is also kept within easy reach of the driver. The Scotch caller is much louder than the button whistle for any foxes that are a bit further out.
When the action starts to heat up, it’s handy to have spare ammo close to hand. An elastic buttstock shell holder is a good way of storing some extra rounds. I have also made a simple ammo holder by using the plastic cartridge holder that comes in the box with some brands of ammo. I simply secured it with a couple of cable ties to the underside of my roof rack and it places some extra rounds out of the way, but easy to grab in a hurry. As for the spotlight you choose to use it pays to buy a quality item. I did use a cheapie from an auto store years ago but it had a meltdown one night and left us without a light for the rest of the trip. For a bit over $100 you can get a good quality light that will serve for years. Because globes do have a limited life always carry a spare and you’re all set.
That covers the equipment side of things, now it’s time to talk strategy. Often when game is spotted it will sit and present a stationary target, but at times, foxes especially will trot away. Sometimes a blast on the whistle will make them stop momentarily. Be ready, because they’ll often only stop for a couple of seconds before vanishing. If a fox is spotted out of range we will shut off the engine and lights. Keeping our voices low, we then have the driver start using the Scotch caller. Give it 10-15 seconds and try the light again. If he is coming in shut off the light again and continue the process until he is within range. It is essential that everyone in the vehicle keeps quiet and still so as not to alert the fox or spoil the shooters aim. A variation of this is to park the vehicle and with all lights off use the caller or whistle for 30 seconds or so and then have a scan around with the light. Continue this for five minutes or so and if nothing happens try a new spot. This has worked for me plenty of times. When a fox is spotted, aim the light slightly off to the side of the fox so as not to spook him by dazzling him. This  also works with rabbits. They will often sit for a bit longer if you do this.
Safety is most important when spotlighting. There are a few simple rules to remember to make your nightly forays safe and enjoyable. I love a night out cruising
the paddocks in search of ferals. If you can thin them out a bit your host will be very pleased, especially if they are causing damage to crops and fences etc. When lambing season is approaching, foxes should be at the top of your list, to minimise losses of newborn lambs to these marauding predators. Whatever you’re chasing, spotlighting can turn the odds in your favour and make your pest control efforts much more effective.
Safe shooting. 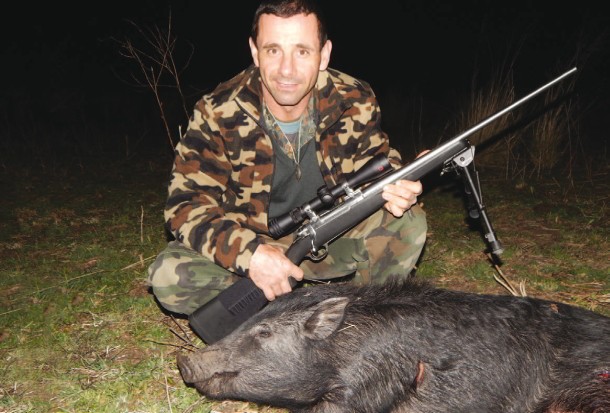 SPOTLIGHTING SAFETY
• M ost importantly, always positively identify your
target before firing.
• Keep the chamber unloaded until game is spotted.
• E nsure that no one exits the vehicle without
making those in the back aware.
• C heck the backdrop behind your target.
• T ry to use hearing protection including those
inside the vehicle. 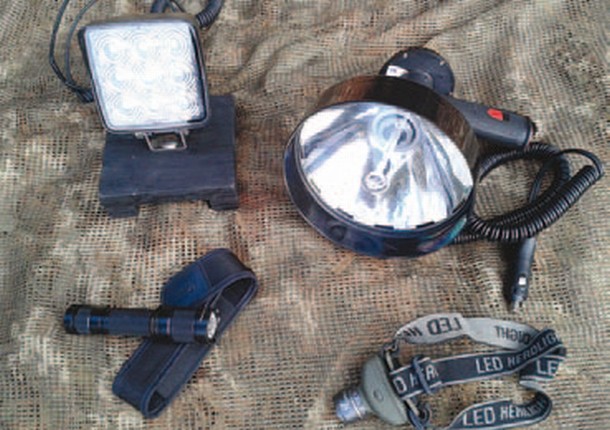 Tools for the spotlighter that enhance safety and
efficiency clockwise from top left. A square LED
worklight for the back of the tray, HI D spotlight for
lighter socket, headtorch and belt-carry flashlight.