In this story Darren Marks takes his two boys on a mid winter hunting trip to Central West NSW. He is chasing a variety of feral game and helping to reduce the large fox population on his friend’s sheep property.

It was mid July and the weather was quite good when I left my home on the Central Coast of NSW but the further I headed West, the worse it got. Rain and strong wind gusts had me wondering what would happen when my two boys, Damon and Jacob and I arrived at the property to set up camp. With the sun dipping toward the horizon I was starting to get a bit worried. Unbelievably, the sun broke through just as we arrived, so in a new record time we set up the tent and our beds and heated up a ready made dinner of pasta bolognese.

Our plan to do some spotlighting on our first night had to be aborted as the rain returned, so it was an early night for the three of us.

We awoke to a fine but icy morning and quickly got organized for a scout around. The paddock behind us had a new crop of young oats so I thought it might be worth a look. As I glassed the opposite hillside through the Leupold 8×30 binoculars, a mob of about eight pigs was sighted feeding on the succulent green shoots. Using a stand of trees as cover, we closed the gap to about 120 metres. Damon lined up on a big black porker and let go the shot from the Ruger .223. Obviously mortally wounded, the pig made the short distance to the scrub and couldn’t be found. We were all a bit disappointed not to find it but unfortunately my Remington .270 had a brand new scope fitted and hadn’t yet been zeroed. Any pig that gets hit with that doesn’t usually run too far. We returned to camp for a hot breakfast and cuppa, and with that inside us we decided to try some fox whistling. We found a shady spot that gave us a good view of the surrounding terrain amongst some broken timber and soon the sound of the Tenterfield whistle was drifting across the grassy paddock. After only a short time a fox was spotted creeping towards our concealed position. Damon let him get to about 50 metres away then knocked him over with a well placed shot. We tried a couple more places with no luck then found a spot behind a contour bank and got comfortable. Jacob let out a few loud blasts on the whistle as I scanned the scrubby hillside facing us for any movement. Before long the boys alerted me to a sneaky fox cautiously heading in our direction. He was only 50 metres away so I didn’t waste any time in case he got our scent on the variable breeze. As he paused the shot dropped him in the grass. We decided to go back to camp because I needed to check the rifles for zero. After I finished doing that and the boys cooking a bbq for dinner it was time to get ready for a spotlighting mission. I was keen to try out a rack I had made that held the .22 ready for action in the back of the ute. We always use the .223 with the light, but it would be handy to have the .22 handy for any rabbits we came across. With the rack fitted and everything else prepared we left camp to try our luck. Damon was up first with me supervising, while Jacob peered over the steering wheel as he drove us around. A fox was soon picked up in the light but too far for a shot, so in a routine that became quite well rehearsed over the week Jacob killed the engine and lights and started using the scotch caller through the drivers window. After a short time I flicked the HID spotlight back on and this fox wasn’t crafty like the ones in childrens books, he was galloping in, anticipating an easy meal. I let him come a bit closer, then pulled him up with a shout. Damon put the crosshairs on his head and put the 55 grain pill into his forehead. Next was my turn and it only took a couple of minutes to find another customer. A pair of foxes were spotted chasing each other around next to a dam. As the light picked them up they stopped and stared in our direction. Quickly aligning the crosshairs on one, I squeezed the trigger and heard the satisfying sound of a thump as he went down. The other one took off and was last seen streaking over the hill away from us.

As the night went on it became obvious that we had lucked onto one of them nights when the foxes are numerous and only too happy to cooperate. Whichever ones we found were either dispatched immediately or came readily to the caller. 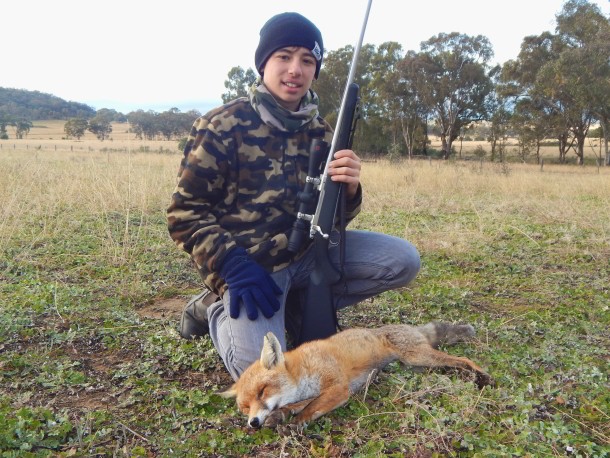 As we drove past the old homestead a bunny was spotted crouching in the garden. I quickly grabbed the .22 from the rack and nailed him. The rabbits were doing a bit of damage by digging under the house foundations and my mate Graham the farmer had asked me to thin them out if I got the chance. Another one hopped around the corner of the shed and stopped with his nose up, sniffing the air and he too joined his mate in the back of the ute. Quite pleased with my home made rifle rack we started to head back to camp. Eight foxes was the tally for the night and we could have got more but my fingers were numb from the cold. I had six layers of clothing on top, plus long johns under my pants, a balaclava and gloves but I could still feel the biting cold as we drove along. There was no argument from the boys when I suggested we call it a night so while they got the fire going I made some hot chocolates and broke out the cake. As we sat staring into the flames and going over the nights events I felt very lucky to be sharing this time with them. The fire got lower and so did our eyelids so we got into our sleeping bags and there wasn’t too much chatter before I could hear some gentle snoring.

The next afternoon we decided to go after the pigs again. Choosing a spot in a paddock where we had found a lot of pig sign we settled down to wait. The pigs had been turning over the plentiful thistles to get at the juicy roots and we were hopeful we might catch some doing just that. We had a good view of the scrub so it was just a matter of waiting. With a freezing wind blowing in our faces we glassed all along the fence line backing onto the scrub. The sun had sunk below the hills when I recognized the same mob from our previous encounter trot out from the trees and start feeding. Damon chose a medium sized brown and spotted boar. From a steady rest over a handy log he fired and the .270 didn’t disappoint. As it fell the rest scattered in all directions and soon made the safety of the treeline. He wasn’t a massive animal but Damon was ecstatic.

As the week went on the daytime temperatures went up slightly but the nights got colder. We tried for more pigs but couldn’t find any. The fox tally mounted steadily to a total of 18 for the five days we were there. When we were saying goodbye to Graham he was very happy to hear that. Lambing was only a couple of months away and that was 18 less predators threatening his livelihood as well as all the native fauna they prey on.

Heading East on the highway for home the three of us talked about the great time that we had enjoyed together. Hunting and camping with my kids is very special to me. I love teaching them new things and seeing them improve whether its driving, cooking or hunting. I hope it continues for many more years.