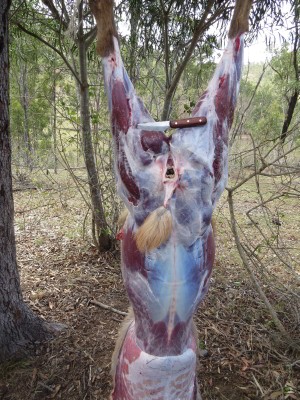 Hell, luckily we both carried torches so the deer was gutted as far as needed, as the front half was a mess. Anyway, cutting it in half, it was manhandled down the side of the mountain to a semblance of a track and the long walk back to the truck was started.  Managing to get the Triton right to it was great as I was knackered and it ended up being 9-00pm before we had tea.  After a quick drink the sack we hit the sack early as a 5am start was the order of tomorrow.  There had been quite a few deer eating up a close neighbor’s feed and he wanted them gone and didn’t care how. Anyway, driving to within a kilometer and a half of where the deer always seem to be, our rifles were checked, back packs on and off we went.  Cutting through a lot of thick lantana on a small track, we slowly emerged onto a beautiful hilly section with heaps of feed growing.  We didn’t see anything for a little while and then suddenly Chris pointed to the top of the next hill. Amongst the trees were three or four stags; they already had antlers growing and it was only mid October?
Chris and I lay down with our packs as rests and tried to ascertain which was the smaller of the stags, as neither of us liked shooting stags in early velvet when they still had a lot of growing to do. But to keep this farmer happy at least one of these had to go. The closest one to us seemed the smallest and even it looked like it would grow into a good animal. If one of us didn’t shoot it, then the farmer would get someone else to shoot them, so the crosshairs were placed on the stag.  Waiting for Chris to fire seemed to take ages and looking back toward him he was motioning for me to take the shot as the trees were in the way for him to shoot. There were also a few small bushes between me and the stag as well. Holding the scope on him and waiting for him to move forward a fraction for a clearer shot, suddenly his head came up and he looked straight at us.  With no time to waste, the shot was taken and no thump came back and the stag trotted up the hill turning slightly away from me.  Following him as the cross hairs touched his shoulder another shot was fired and this time the loud thump came back to us.  He only moved two paces and fell. The first shot must have hit one of those pesky little trees and been deflected but the second one had done the job.  Pacing out the distance of the shot, it was 367 long paces, a very long way. We were both happy to see a lovely rolling fat stag down and ready to butcher for the freezers, but sad in seeing such a lovely animal down with his antlers only partially grown.
While my job was to bleed him and then gut him, Chris walked the kilometre and a half back to get my truck so that he could be hauled up a shady tree off the ground while we went to get a trailer.  We only had a five minute drive back to Chris’s house and picked up the trailer.  Shortly after that the stag was in the trailer and taken back to pick up the hind from yesterday and take to his mates cold room.  Now we both had enough prime meat to last us a fair while.  It’s nice when things turn out right, as many times we end up going home empty handed.

Footnote:
First two deer and dingo were shot with .358Mitchell express rifle using 185grn ACP projectiles. The second two deer shot with a Weatherby .300Mag using 165grn Nosler Balistic tips. The first two deer were cut up using the knife made and shown in a how-to article in the December 2014 issue of Sporting Shooter. 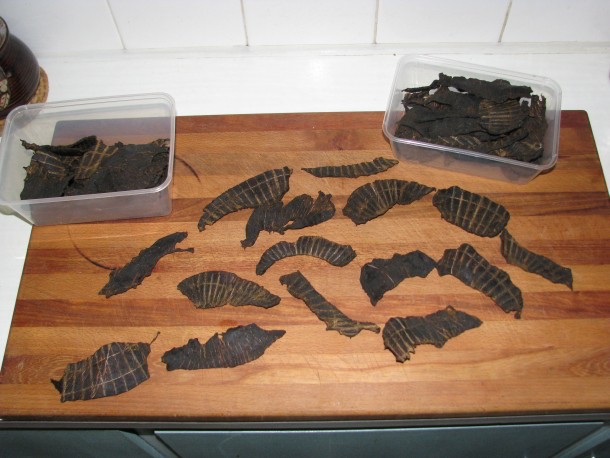 Marinate for 24 hours in mixes below, before drying. These recipe’s are for about a KG and half of lean venison with no fat or gristle

Add or subtract ingredients to own tastes.