Gary hall is back with the local indiginous hunters after wild pork and ‚Ä¶ bats?

It was still ‚Äòbloody‚Äô dark! And I was still half asleep, (nothing a couple of rugged brews couldn‚Äôt fix) as we picked our way through the light scrub and numerous dense stands of pandanus that encompassed a large expanse of wetlands. A short time later the glowing red fireball of a sun finally peeked over the horizon, bathing everything in its path in an eerie crimson. It was visually magnificent, but what was even more spellbinding was the overpowering noise, as thousands of honking magpie geese did what usually takes a strong caffeine fix. (Woke me up)

The drone of magpie geese could be clearly heard overhead as two filigreed arrows of them crossed the red cloudless sky. A split second later, the sound of Brett‚Äôs shotgun boomed twice and a large black shape came hurtling down to earth with a thud followed by another. 100 metres to my right the distinctive blast of a shotgun followed by a thud meant Zed had also scored a hit.

As this was my first time goose hunting my adrenalin was really pumping. It was full-on. Boom…..thud! Boom…..thud! Boom! Suddenly, Brett yelled ‚ÄúLookout‚Äù. An instant later a large goose nosedived into the dirt at speed a few paces away. It would have flattened me.

Undeterred, I shouldered my double barrelled Rossi coach-gun, a great little hard-hitting scrub gun; ideal on close quarter hogs, but a few inches short for highflying geese. So my only option was take out the honkers with a fear of heights. Unaccustomed, as I was at being a bit short in the length department I took aim at a low flying kamikaze goose crossing overhead. Boom! A nanosecond later ‚Äòits goose was cooked‚Äô and it dropped out of the sky and ploughed into the runway. 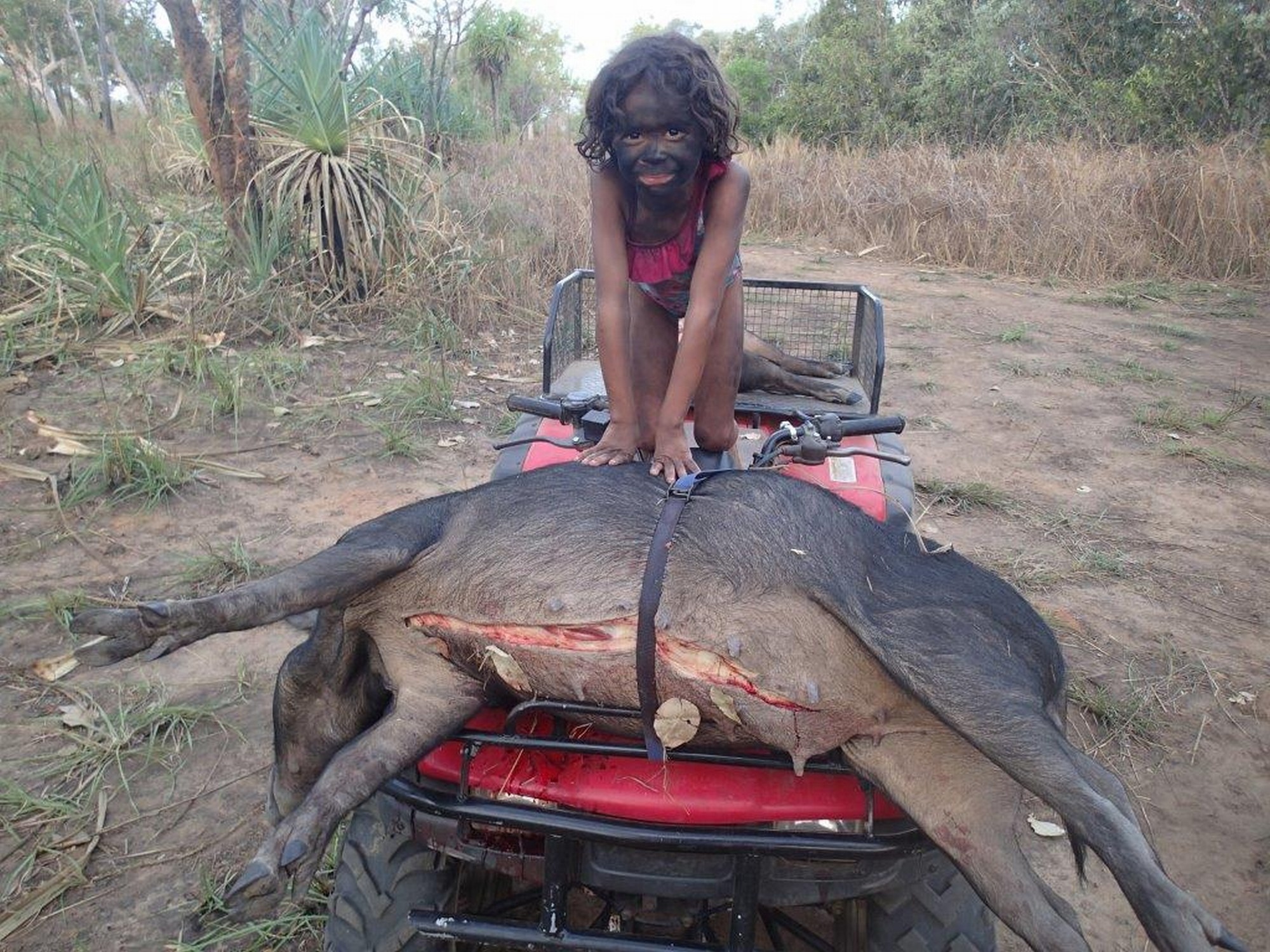 Luckily, one of Brett‚Äôs young boys, Keegan was constantly at my side handing me shells (as quick as I could fire them) from a crumpled box he had clutched close to his chest. The rubbery black neck of a large recently deceased magpie goose was in his freehand and the rest dragged along behind as we moved to better firing positions. The way I was shooting there was no such thing as a ‚Äòbetter firing position‚Äô.

It sounded like the gunfight at the √ìK Corral‚Äô I‚Äôd certainly fired off more rounds than Doc Holiday, but my little shadow was still only dragging one bedraggled goose across the dirt. Luckily, Brett and Zed knew what they were doing.

Thirty minutes later and I was wishing it was a ……….you only plucked what you shot policy. As now the real hard work started. (Pluck me!) Luckily, Brett‚Äôs wife Leanne was a seasoned feather puller and could remove the birds‚Äô feathers quicker than a low-lying Qantas engine. With the plucking in full swing, a naked bird was thrown on the hot coals for smoko.

An hour later, the campsite looked like there‚Äôd been an explosion at a quilt factory, feathers were everywhere. To escape the feathers Brett‚Äôs youngest daughter Breanne had taken refuge in the back of the trailer and was currently enjoying her morning bottle surrounded by a number of soon to be plucked geese.

That afternoon I watched as Leanne, JT (Zed‚Äôs girlfriend) and the kids went in search of turtles at the edges of the floodplain. As I relaxed in the shade you could hear the laughter of children as they ran about in the oozing black mud, it was filthy work, but everyone seemed to be having a goodtime and a few hard-shelled critters were added to the night‚Äôs menu.

Zed also nailed a solid, 80kg three-legged boar displaying some lethal ivory. After the kids loud antics looking for turtles drove it from cover. On inspection the leg had been cleanly removed at the shoulder and was well-healed. Most likely the result of a salt water crocodile attack at an early age.

In hindsight I should have just photographed the smiling children and their captive turtles. As eating one was a big mistake……..must be an acquired taste.

On another hunt, while Brett and Family fished for black bream Matt and I followed the water course downstream. The vegetation that hugged the riverbank was as thick as a politician‚Äôs wallet and made progress slow and difficult going. There was a narrow track at the water‚Äôs edge, but the thought of being lunch for a ‚Äòsnapping‚Äô handbag made pushing through the dense foliage a safer option.

Boom! A nanosecond after Matt had let rip with the .308, dropping a reasonable sized sow the mob erupted into action. Matt‚Äôs dog, Snoop a light framed, black and white Bull Arab cross that‚Äôs all legs quickly outpaced a solid framed black porker. With Snoop earning his biscuits and Mate my young bailer throwing in a few barks for good measure the hog was quickly taken care of.

Firstly, my hat goes off to the Kiwi pig hunters who carry gutted large hogs over their shoulders up hill and down dale back to camp. As Matt and I almost needed CPR just carrying half a hog (on a stick across our shoulders) the 2k‚Äôs back to the others.

‚ÄúDo you want a bat?‚Äù Brett asked as we staggered exhausted back to the vehicles. Funny place for a game of beach cricket I thought. ‚ÄúThey‚Äôve just been cooked‚Äù Brett said with a grin. On inspection they just looked like black, charred miniature Yogi Bears. ‚ÄúThere‚Äôs no way I‚Äôm going to eat something grinning back at me and the males all look aroused,‚Äù I replied. ‚ÄúLooks like there on their honeymoon‚Äù Matt chipped in. After graciously refusing lunch, Matt and I opted for an old favourite; a tin of Woolworth‚Äôs rice cream 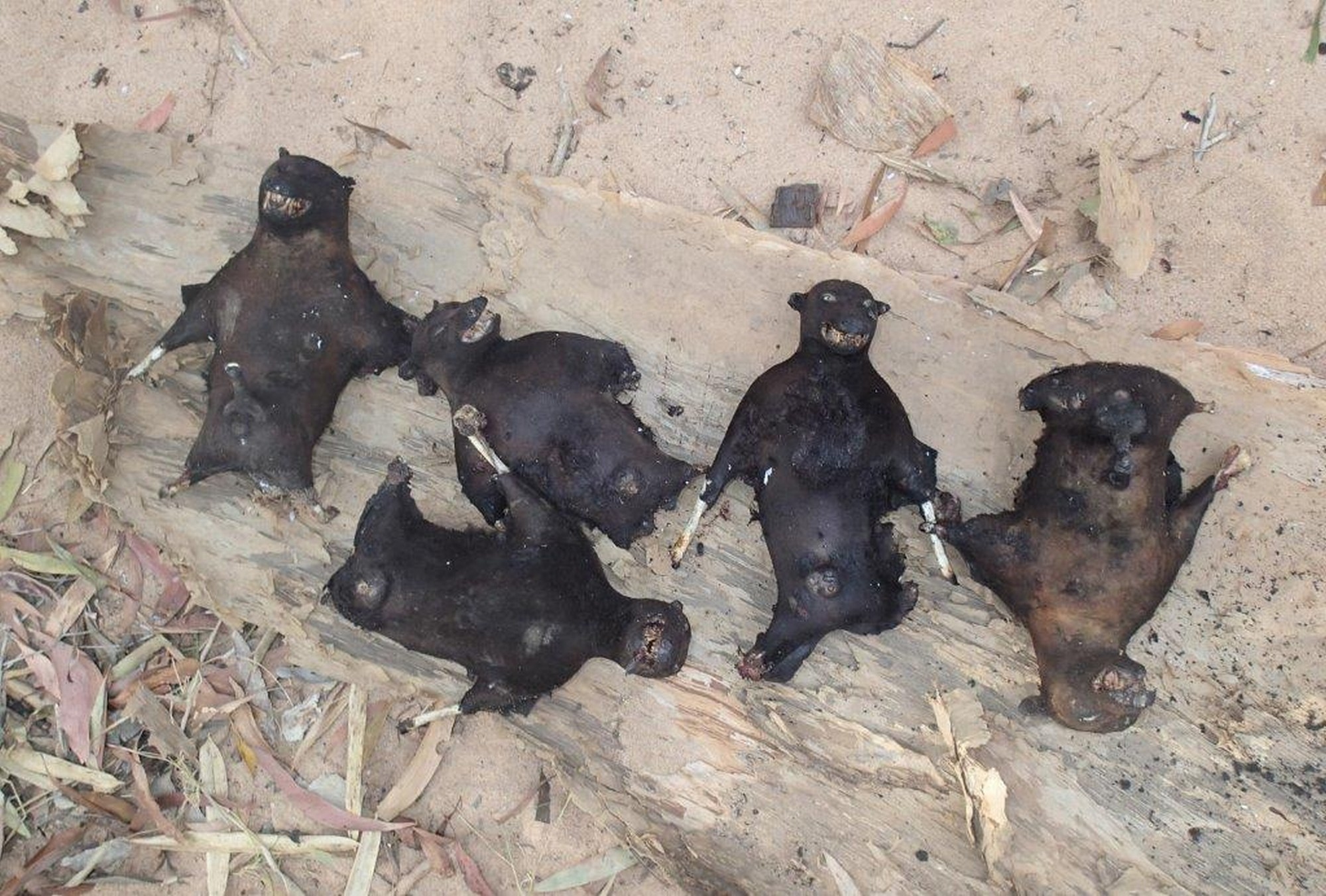 It was decided we‚Äôd take both quads and pick up the other fallen hog, so with Brett and a small portion of his family, Keegan and Braithlee (he‚Äôs got seven kids!) on the back of his old Honda we led the way. It was rough going; the shoulder-high, dried weather beaten stalks of grass hid the corrugated ruts, old wallows and pig diggings of the wet season that had now set like concrete in the merciless heat.

Brett‚Äôs second youngest, (The Little Bloke) Brettston was having an absolute ball on the front of the quad and was a little disappointed when we finally rolled to a halt, prior to lifting the weighty sow on the quad’s front rack.

The little bloke, wearing only a nappy and a big grin certainly loved all the outdoor action and adventure. As the confident little tacker stood with his hands on his hips quietly taking everything in, we secured tonight‚Äôs tea in place. Moments later, we retraced our way back along the narrow corridor we‚Äôd bulldozed with the quad’s roo bar.

That evening, as the pig slowly cooked underground on a bed of hot coals and specially picked stones, covered in paperbark, we sat around the campfire enjoying a few laughs. After what seemed like an eternity the roast pork was finally ready … and it was worth the wait.

Early the following morning, a cranky, immature bull buffalo took offence at being woken from the land of nod and decided the quad was public enemy number one. After a couple of anxious moments trying to find reverse gear we decided to head back to camp with our tails between our legs. ‚ÄòCall me a wimp‚Äô but I like my buffalo horns mounted on the shed wall, not the front of the four-wheeler.

It had been an excellent couple of days with good company and close friends. Watching young kids getting down and dirty enjoying hunting, fishing, camping and quality family time in the bush is always a worthwhile experience.

Knowing a cranky buffalo is nothing compared to a cranky wife, so it was time to pack up and head home.