Here is some insightful information, borne of experience, on hunting wily mountain pigs.

If anyone were to ask me what game I like shooting most, the answer would have to be “rabbits”. However, if someone asked me what game I find the most challenging my answer would unequivocally be “mountain pigs”. Why? In my experience, pigs living in the mountains are far more difficult to locate than their western cousins. Due to their transient, nocturnal nature, mountain pigs are a worthy adversary for even the most experienced hunter.
My local area surrounding Glen Innes is mountainous and finding pigs can be a real challenge. Unlike pigs found on crops and watering points of the plains, mountain pigs scavenge and forage their way from food source to food source in order the survive. Given the climatic diversification of the mountains, pigs tend to travel many kilometres from where they bed to a reliable food or water source, mostly at night. Therefore, mountain pigs are often bedded well before sunrise, making them an elusive quarry for the hunter who likes to sleep in. Some hunters manage to stumble across mountain pigs on the move late afternoon however this is more often than not
luck. So how do we find pigs in the mountains? 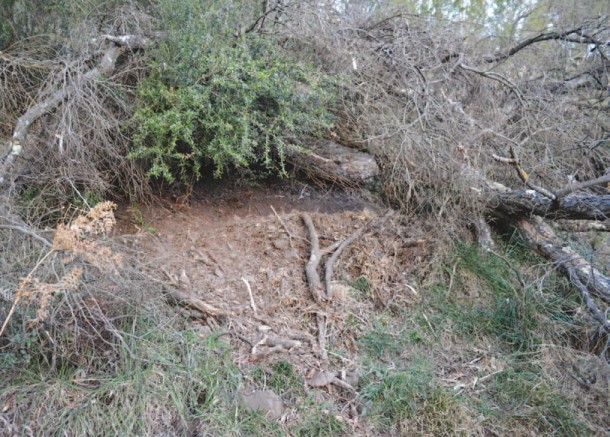 Above: A mountain pig bed, looking into prevailing wind with good field of observation.
Finding pigs in the mountains can be a whole lot harder than expected, however if you keep a few factors in mind, eg food, water and shelter this will help narrow down your search zone. My preferred method of finding pigs is to locate their bedding areas. Pigs, not unlike deer prefer to bed on hill sides in thick scrub overlooking most angles of approach. Chosen areas will often have a prevailing wind direction which is in the hogs favour. Like many game animals, pigs have poor eyesight and therein rely heavily on other sensory assets such as hearing and smell which are highly sensitive and well-tuned. It is therefore important for the astute hunter to approach an area where pigs may be laid up with the wind in your face, keeping noise to a minimum. Pigs in my area generally prefer to bed amongst the box thorn, making them particularly difficult to detect. It is often the flick of an ear or other minute movement which alerts the hunter to their presence. I carry a good quality set of HD Vortex binoculars with me, allowing me to look into heavy scrub with clarity and depth of field which is often the difference in seeing pigs or not. Binoculars definitely give you an advantage in the field. Mountain pigs prefer to make nests under the box thorn often digging in against the butt of a tree to access cool, moist soil to lie up in. Pig beds are very distinctive, however are usually well camouflaged and difficult
to find.
While humans often associate pigs as being filthy creatures, the reality is that they are a relatively clean animal. By this I mean that pigs generally don’t defecate or wallow in their bedding areas, preferring to travel short distances in order to do so. Fresh scat and wallows can therefore be a classic indicator that pigs are in the near vicinity. I have often located fresh scat only to find pigs bedded a further 50 metres or so up a hill. Upon finding fresh sign a hunter is well advised to “switch on”, as
your approach could be compromised by complacent
or hasty movement.
Wallows are a classic indicator of pig presence, however can be few and far between in the mountains due to cooler temperate conditions. Pigs in this environment don’t need to use mud and water as often as their western cousins to regulate core body temperature. If you find a wallow, it is often worth sitting off it. Pigs, being a creature of habit generally return to a wallow at the same time each day and can be often caught out approaching their favourite mud hole. Wallows can be found in deep overgrown water-holding gullies or where a spring has burst from a mountain side. Finding wallows often involves extensive leg work and the walk out can be exhausting, therefore requiring a good level of fitness.
Unlike western hogs, mountain pigs need to work for their food. In my area, pigs tend to forage on nettle bulbs (stinging nettle), nut grass bulbs and grubs, overturning vast areas of earth in a night. Large amounts of rooting can indicate that a mob of pigs has moved into an area, however remember that mountain pigs are transient and just because they were in that location last night certainly does not mean they will return over consecutive evenings. It is my experience that rooting around the base of trees often indicates the presence of a solitary boar. Should you see overturned rocks and soil around the base of trees, the boar in the area will often be of trophy quality, however will be a cunning adversary to find. Boars of this quality are rarely seen during daylight hours preferring to travel and feed under the cover of darkness. Mountain pigs also tend to eat a lot of rotting carrion (meat). If you find a dead cow or kangaroo it is often worth putting in an afternoon overlooking the carcass to ambush any returning pigs. I have shot a lot of pigs like this mostly on last light, so good optics is a must.
There you have it, “Mountain Pigs 101” in 900 words or less. Give these tips a go and I am sure that you will maximise your hunting potential. Remember that an angry boar
is much faster than a human over 100 metres, particularly in the thick scrub of the mountains. Keep safety in mind at all times as a decent boar can do a lot of damage to an unwary hunter. I would imagine that the walk out would also be particularly unpleasant.