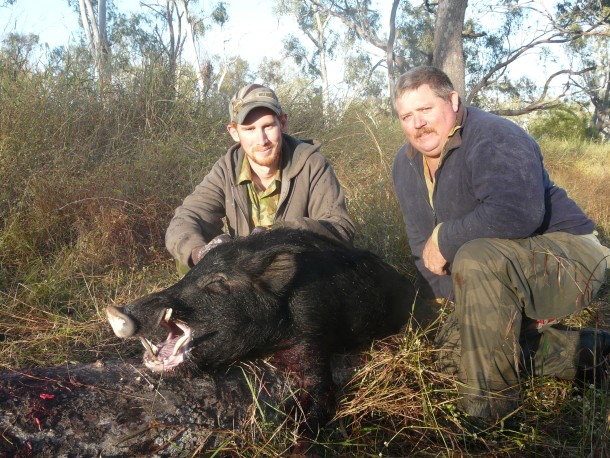 When you don’t get your stag, a big ol’ gnarly hog’s gonna hafta suffice. By Brendan Jones.

I peered out through the windscreen with sleepy eyes into the darkness. The white highway markers flicked by in the spill of the headlights as I kept one eye on look out for anything that might impede our vehicular progress. Be it of a feral, native or bovine nature. I had never really been a morning person, but this wasn‚Äôt even morning by my reckoning, the sun hadn‚Äôt even begun to dawn. Paul and I had driven west from Townsville late last night to Al‚Äôs place in Charters Towers where we had camped out in the living room. Now the 3 of us were on our way to the the edge of the basalt country in North Queensland. I was drawn out of my pre-dawn pre-hunt contemplation (read sulking) by the conversation between Alan and Paul.

‚ÄúSo what happens if we see a pig?‚Äù asked Alan. ‚ÄúShoot it‚Äù, replied Paul. Funny conversation to be having on the way to a hunt. The context here though is we were chasing chital deer. Hence the discussion about blowing our cover for a ‚Äúnon-target‚Äù species. I waded in to the conversation, ‚Äúhow big is this hypothetical pig?‚Äù Discussion continued for some kilometers while all variables were taken into consideration. Size and number of pigs. How early or late in the hunt it was. How many deer had already been taken (what a laugh). The truth was we hadn‚Äôt killed very many deer or pigs thus far. So I had a feeling if it wasn‚Äôt a native animal, and it wasn‚Äôt a cow, it was getting shot at. But it never hurts to dream a little. Our hunting ground was a long skinny patch bordered to the north by a narrow but deep stream that flowed all year round fed by the springs in the basalt wall, and to the south by a broad and shallower seasonal sandy creek. In between these two existed a spider web of little streams and creeks in amongst patches of tall open trees with tall grass, broken with patches of rubber vine and areas of scrubby acacia. This 2000 acre area is where the deer exclusively hung out within the much larger property. We were entering the game zone from the East, where as the normal pattern was to come from the South. Wading a waist deep creek, predawn in late June didn‚Äôt sound fun (regular readers might recall a previous encounter with the same creek in September 2015 issue of this publication). So this morning we were 3 (not-so) wise men coming from the East.

To say we were probably a bit early was a bit of an understatement. We stumbled around in the complete dark for about 20 minutes in a general westerly direction pushing deeper into our hunting area. 20 minutes of valuable sleeping time I was thinking. I say in general direction because we were a bit like a pinball bouncing our way between many of the small spring fed creeklets and streams. Though these weren‚Äôt visible on the Google machine recon, they were too deep to navigate in the dark without getting soaked. Finally the sun began to dawn. Early gray cloud-stifled light began to illuminate our surroundings. In the dark my imagination had conjured visions of small groups of deer feeding quietly all around us. However, the reality of the situation was no deer. No real surprise I guess. It is probably pretty easy for a deer to hear and/or smell 3 guys stumbling through the bush in the dark. We pushed on. Eventually we reached a point that I knew was inevitable. After a morning avoiding wet boots and soggy pants we had found ourselves with nowhere left to go. We had ended up inside the branching point of a creek. I sat down and started unpacking my bag to find the GPS and some more satellite printouts to figure out which branch to cross. We were discussing with disbelief the lack of any feral animals given the prime country we had been traipsing through when we were interrupted by muffled noises in the distances. Paul hissed ‚ÄúPIGS!‚Äù I stood up and over the tall reeds was a mob of about 15 pigs at the edge of the main un-branched creek 40m ahead. They were grunting and carrying on apparently psyching themselves up to cross the cold water. Then they started to cross, more or less single file, squealing and making a big racquet in the chilly water. I shouldered my rifle ready to unload a hail of hot lead on the amphibious porkers, but cooler heads prevailed. It was decided to cross over the smaller, and thankfully narrower, off-shoot to our right and stalk in on the far bank. In the spirit of team work Alan and Paul forded the waist deep cold water and disappeared into the grass, leaving me to madly stuff all my gear in my bag. So much for never leaving a man behind.

I found the guys about 50m into the scrub on the opposite side, crouching in the grass. In front of us was 2 large patches of guinea grass about 8 foot tall, with a 10m gap between the 2 patches. I was informed the mob was in the grass to the left but there was one or two in the open. Of most interest was the large boar they pointed out milling around in gap. I could hear the pigs carrying on in the grass, but the shaking and swaying of the foliage would have betrayed their presence regardless. The boar was feeding so we stalked in closer. All the sudden he lifted his head and stood there looking right at Paul and myself. We were caught out in the open so be both just froze. He kept looking for what seemed like forever, and then put his head down to continue grazing. That was enough of that, time to take this big boy before we scared him off. We signaled to Alan our intentions and he was thinking the same thing. Alan had a rest on the tree he was crouched behind. Rather than risk moving again Paul and I lifted our rifles and opted for an offhand shot.

‚ÄúFire on zero?‚Äù Paul whispered. I started to count down as loudly as I dared, ‚ÄúThree‚Ä¶ tw- ‚Äú. CRACK- Ka-Boom! Half way through ‚Äútwo‚Äù Alan let fly with his .223 and instinctively Paul followed up with the .243, probably before Alan‚Äôs bullet had even landed. The boar went down on the spot. I ran past the downed boar through the gap in the grass thickets to see the mob running like their lives depended on it, quickly vanishing into the scrub. One little black one was bring up the rear and I shouldered and fired just as it disappeared from view. I couldn‚Äôt see the pig but Paul having repositioned could. Once he knew where I was his gun barked again. ‚ÄúCould you see the mob?‚Äù I asked. ‚ÄúI think I hit a small black one‚Äù. ‚ÄúNah‚Äù, he replied, ‚Äújust this one, which was running very slow‚Äù. We examined the pig to find he had finished off the one I had slowed down. No loose ends. We all regrouped for the mandatory photo session and to remove the jaw bone from the boar. On closer inspection it was not a bad pig at all, solid and healthy with a decent set of hooks. We continued to hunt on. With wet pants and the chafing already started we stopped avoiding creek crossings. Turning south we made a big loop back to the vehicle that would take us about 2 hours. The sun was well and truly out and the day heated up fast. There was sign around in the form of tracks and tree rubs but we couldn‚Äôt catch up with the stags that had made them. The deer had all bedded down for the day and the rubber vine and tall grass was so thick in patches I was flat out seeing 10m in a straight line. You would hear the sound of someone sucking in a big breath in shock only to turn around and see them leaning on a tree with a hand on their heart waiting for their pulse rate to come down. I walked to within literally 3m of one hind before it exploded in front of me out of the grass and vanished into thin air in the blink of an eye. Vanished into rubber vine and grass more accurately. Not for the faint hearted, that‚Äôs for sure. We eventually made it back to the car and that was the end of short chital hunt, time for the long trip home. We may have failed in our mission to get a deer, but we did answer the question ‚ÄúWhat do we do if we see a pig?‚Äù Any hunt where plan ‚ÄúB‚Äù is a large toothy boar is alright in my books.