Q
I recently obtained a Marlin Model 1894 lever-action rifle which is chambered for the .41 Remington Magnum. It came with 150 once-fired cases that I want to reload for use on pigs. Since I got it I have mounted a Redfield Revenge 2-7×34 scope on it,
so as soon as I get the ammo loaded, I’m ready to go. My local gunshop doesn’t know anything about this rifle and told me to write to you for information on reloading. Can you recommend a decent load for pigs and goats, plus any information about this rifle’s origins?
– Paul Kirby 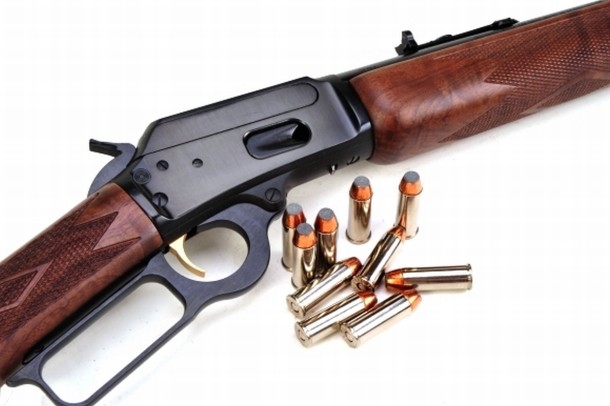 A
I seem to remember testing one of those 1894s in .41 Magnum back in 1985. The original Model 1894 Marlin was made for the .44-40, but was reintroduced in 1969, somewhat modified for the .44 Magnum. It has a bolt that’s square in cross-section and a full length bolt slot in the right side of the receiver. The barrel on the .44 Magnum is 500mm long and has Marlin’s micro-groove barrel rifled with 12 shallow grooves. The tubular magazine holds ten rounds. Back in the day, Remington’s 210gn JSP xxactory ammo shot so well that I figured it would be difficult to better it with handloads. Referring back to my log I find that the fast burning powders recommended for pistol loads didn’t work too well in the rifle. Of the powders I tried W-296 proved best in providing good accuracy and velocity. For the feral animals you want to shoot I’d recommend a load comprising the Hornady 210gn HP-XPT and 21gn of W-296 for a velocity of 1698fps. Two other loads that worked all right was the Sierra 170gn JHC and 24gn of W-296 for 1933 fps or 220gn JHC and 21.5 gn of W-296 for 1777fps. The Marlin I tested in .41 Magnum was acceptably accurate, but nothing to write home about. At 100 yards most groups ran from 3 to 4 inches, but today we have better bullets. It should make a good 100 yard rifle for pigs and goats.

omg
12
omg
Nick Harvey is one of the world's most experienced and knowledgeable gun writers, a true legend of the business. He has been writing about firearms and hunting for more than 65 years, has published many books and uncounted articles, and has travelled the world to hunt and shoot. His reloading manuals are highly sought after, and his knowledge of the subject is unmatched. He has been Sporting Shooter's Gun Editor for longer than anyone can remember. Nick lives in rural NSW, Australia.