The Montana Rifle Company was founded in 1990 when Keith Snipe opened a gunsmithing shop repairing and building rifles in Kalispell Montana. Three years later Snipe formed the Montana Rifleman to make barrels to put on his custom rifles.

However, obtaining a steady supply of actions proved difficult, so in 1999 he started making his own controlled-round feed action. The demand for barrels, actions and complete rifles grew so rapidly that in 2007 Keith’s son Jeff took over as president of the riflemaking part of the business called Montana Rifle Company.

For the last 14 years Montana Rifle Company has been offering its own version of the pre-64 Model 70 Winchester. They call their action the Model 1999 and, with a few noteworthy exceptions, it started out by combining the best features of the 98 Mauser and the pre-64 Model Winchester.

Instead of having coned breeching in the rear of the barrel like the Model 70, however, the Model 1999 controlled-round feed action was patterned after the 98 Mauser, even down to having the C-style inner collar that includes an extractor slot.

The face of the barrel is made flat and flush with the squared-off nose of the bolt. The Montana 1999 design differs, however, by having the cone in the inner collar instead of coning the breech end of the barrel to duplicate the Model 70 design.

The design of the bolt head has been changed. In the original 1999, the left locking lug was pie-shaped in cross section rather than being rectangular, which meant it was narrower at its base. The lug was held captive by the raceway instead of riding on it, and thus its range of lateral movement was restricted so that even when fully withdrawn there was very little sideplay in the bolt, even with the action being cycled with the rifle held against the shoulder.

The current bolt is pure Classic Model 70, a one-piece chrome-moly casting with the low-profile bolt handle swept gracefully rearward. Its shank fits down in a notch in the receiver to act as a back up lug.

A pair of large, solid head lugs with a shear area of .398 sq. in. and bearing area of .071 sq. in. have the longer left (upper) lug extended and contoured at the front to match the contour of the coned inner collar. The lug is dovetailed and rides in a raceway within the receiver to act as an anti-bind device which keeps the bolt running straight and smoothly.

Many controlled-round feed guns make it necessary for cartridges to be fed from the magazine, making single loading a difficult chore, but like the Model 70, the Montana’s non- rotating claw extractor has the face of the claw bevelled to allow it to snap over a cartridge rim as the bolt handle is lowered.

Along with the claw extractor the pre-64 Model 70 features the so-called “cone” breech. The rear face of the barrel tapers inward toward the chamber. This funnel-shaped breeching has been used successfully in the 1903 Springfield, M17 Enfield and Model 54 Winchester. The forward surfaces of the bolt head are angled to match. Montana improved upon this design.

Any criticism of the Model 70’s coned breech being a weak link in supporting the cartridge head have failed because it has proven strong and reliable over years of hard use. Nevertheless, by repositioning the cone in the collar, Montana has managed to combine the best features of both the Model 70 and 98 Mauser breeching systems.

The Montana 1999 in 7mm Rem. Mag. has a very short extension that fits into a loop in the collar, just like the Classic Model 70, rather than being fixed to it as in the pre-64 model. The Montana also uses the pre-64 pattern ejector which is pivoted in the receiver floor and extends through a slot in the bottom left quadrant of the bolt face.

The Montana 1999 and the Model 70 receiver look so much alike that it could have been cloned. They have similar profiles and flat bottoms, the large integral recoil lug measures 8mm thick and extends downward over 11mm.

The rear tang has an overhanging outer edge which rests on top of epoxy in the stock. Receiver and bolt are investment castings from Pine Tree Castings and arrive from the foundry in less than finished form. All the grinding, polishing, lapping the locking lugs and fitting of trigger and safety is carried out in-house.

The Model 1999 action comes in chrome-moly or stainless (ASR-SS) and with right or lefthand bolts. The action on my test rifle, is long enough to handle cartridges up to the .458 Lott, the short action takes the .308 Winchester family of cartridges as well as the Winchester Short Magnum series.

The Dangerous Game Rifle (DGR) based on the massive scaled-up double square bridge Mauser-type action Professional Hunter action houses cartridges as large as the massive .505 Gibbs. With a bolt diameter of .815”, it is one of the strongest actions ever made and having the 98 Mauser 5-point gas venting system is also one of the safest systems.

To reduce weight, these rifles are stainless steel coated with Ceramic/Teflon for all-weather protection, and have a carbon-fibre, Kevlar-reinforced stock with no floorplate. The Tactical series includes the Marksman, Sniper Scout and NATO.

Praise be, the Montana 1999 also has the Pre-64 Model 70’s override trigger, arguably the one of the most simple and foolproof triggers of all time, and one of the easiest to adjust to give a clean, crisp let-off. The trigger on my test rifle broke crisply at 1.6kgs. Montana’s trigger and sear assemblies are manufactured using an EDM process which maintains tolerances to within 0.00003”.

One departure from the Model 70 Classic is the bolt stop/release. Instead of projection on the ejector blade itself jutting up from a slot in the tang behind the receiver bridge, it is more conventionally located on the left side of the bridge like the 98 Mauser. It works on a simple pivot arrangement; you simply push inward on the rear of the grooved rear end of the latch, and the front portion pivots outward, freeing the bolt for removal.

The trigger guard bow and floorplate frame are an integral unit like on the current Model 70 Classic, the Remington Model 700 and Weatherby Mark V so that only two action screws are needed. And again like the Model 70, the front action screw is located behind the heavy recoil lug instead of screwing into the lug like on the 98 Mauser. The 3-position wing safety on the bolt shroud is also Model 70.

Although mostly a Model 70 clone, the Montana copies the 98 Mauser’s effective gas-handling system of controlling gas escape at its source by having gas relief holes in both sides of the receiver ring. Any gas entering the firing pin hole is released downward into the magazine well through two large oval ports in the underside of the bolt rather than the two smaller round holes in the Model 70.

In addition, the flanged bolt sleeve fully covers the left bolt raceway, deflecting any gas that might escape along it away from the shooter’s face. Thus the shooter is well protected from a cartridge failure in the Montana action. This system based on 98 Mauser principles, is much superior to that of the Model 70, and engenders greater respect for the safety of the 1999 action.

The ASR is fitted with one of the Montana Rifle Company’s own button-rifled barrels chambered in 7mm Rem. Mag. featuring a 1:9” twist, RH, 6-groove rifling. The company manufactures barrel blanks, contoured barrels, octagon and fluted barrels in chrome- moly and stainless in lengths up to 813mm, and .50 BMG barrels up to 965mm in length.

They also have a custom shop that will fit barrels to their Model 1999 action in a wide variety of standard chamberings, as well as most wildcats, including all of the Ackley Improved rounds. The 650mm barrel boasts a recessed target crown and is free-floated right back to the receiver ring allowing sufficient space to allow the barrel to vibrate without touching the wood.

The Montana ASR rifle I received for testing is all steel and walnut and weighs 4.5kgs with a Bushnell Legend Ultra.HD 4.5-14x scope in Tasco’s own Delta steel two-piece rings. The stock is American black walnut showing long, straight grain running through the grip into the forend.

The Monte-Carlo comb slopes upward toward the rear to slip out from under the cheek when the rifle comes back and together with a Pachmayr pad and dual crossbolts absorb the recoil. There’s a generous cheekpiece and a rounded forend. Checkering in a point pattern has sharp diamonds, but panels on the forend are rather skimpy due to the having finger grooves along the top which reduces the area to be covered. The action is glass bedded in the stock with ACRA-Bond around the recoil lug and under the rear tang.

The Montana rifle is also available with a Bell & Carlson synthetic stock, featuring an action-length aluminium bedding block epoxy-bedded at the recoil lug and for the first 26mm or so of the barrel channel.

The metal of the barrel and action are protected with a Cerokote-like matte-black finish so hard and abrasion-resistant that it remains attached to the muzzle of the rifle even after firing thousands of rounds.

Fit and finish on the Montana rifle was excellent. The proprietary action is precisely made being “blue-printed” during manufacture with the locking lugs lapped to make full contact. This is something seldom experienced in a commercially-produced rifle, so naturally I expected my test gun to produce good and consistent accuracy.

At the range the Montana performed in line with my expectations. The rifle proved accurate and, just as important, consistently so. Of the four factory loads and two handloads tested, the most accurate proved to be Remington’s 150gn Premier AccuTip Ultra Bonded producing four consecutive, 5-shot groups averaging 1.23” at 100yds over the bench. Although the medium weight barrel heated up after five shots there was no vertical stringing or fliers. Results with all of the loads are in the table.

The hunter demanding the best of the Model 70 Winchester and the 98 Mauser, along with many updated and enhanced features, in a full-size, sporting rifle capable of reaching way out yonder to drop big game in the wapiti class will find the Montana ASR in 7mm Rem. Mag. a worthy choice. 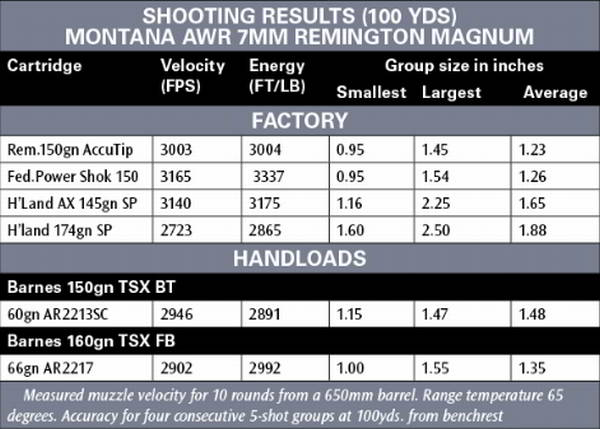 This article was first published in the Sporting Shooter February 2014 issue.

omg
4
omg
Nick Harvey is one of the world's most experienced and knowledgeable gun writers, a true legend of the business. He has been writing about firearms and hunting for more than 65 years, has published many books and uncounted articles, and has travelled the world to hunt and shoot. His reloading manuals are highly sought after, and his knowledge of the subject is unmatched. He has been Sporting Shooter's Gun Editor for longer than anyone can remember. Nick lives in rural NSW, Australia.