The LA101 Crossover exhibits a quality of manufacture which I’ve only ever seen on a handful of high- priced European rimfires. Exterior metal surfaces have a practical Cerokote finish and internal surfaces of the receiver are unequalled for smoothness. In the accuracy stakes, the new Aussie kid on the block is capable of giving Sako, Anschutz and CZ a run for their money.

Lithgow Arms clearly succeeded in their bid to design the Crossover to be “a hunting/target rifle with modern tactical styling, high accuracy and reliability.” What don’t I like about it? Nothing really. Although I’d have preferred the 1kg trigger, I can’t complain about the accuracy I obtained with the 2kg pull.

The stock? I could do without the butt hook which serves no useful purpose in the field, but I’m nitpicking – it’s a really fine rifle. It can’t be helped if it doesn’t adhere exactly to what somebody’s personal tastes are. I can hardly wait to try the Crossover in .22 WMR and .17 HMR.

The Small Arms Factory at Lithgow has been manufacturing military arms for over a century and in 1945,  in the aftermath of World War II, set out to design a sporting rifle. The result was a pair of rimfires: the Model 1 single-shot and Model 12 repeater that were marketed by Slazenger. The Lithgow rifles were discontinued in the early 1970s, leaving shooters with a choice of two other Aussie-made rifles – the Fieldman and the Sportco Model 66S, 66D and 46. The latter was discontinued in 1975 but the former was available into the 1980s. No other Aussie-made rimfire appeared until the LA101 Crossover appeared early this year.

Lithgow Arms is part of the international Thales group, which also owns ADI, and their rifles are distributed by Winchester Australia. The LA101 Crossover is a thoroughly modern rifle that’s not only attractive, but well-made and nicely finished into the bargain. It’s an innovative design able to compete on equal footing with modern rimfires like the Anschutz and CZ; and it leaves the basic American rimfires floundering in its wake.

Intended to be a semi-target rifle, the LA101 has a heavy receiver and medium weight barrel cradled in a hand-filling stock. The fully machined tubular receiver of high tensile steel has a length of 150mm, a diameter of 30mm and wall thickness of 6.50mm. The upper half of the receiver on the left side is scalloped to give it an attractive contour. At the front it carries the Lithgow Factory’s proof mark and on the rear section “Lithgow Arms” together with the company’s logo. A flat area milled into the left side of the action bridge carries the proud legend “Australian made.”

The bottom of the action is machined flat and has an integral lug left full length. At the front it is threaded to take the front guard screw and the next 82mm of its length is taken up by having a polymer magazine well attached to it with a pair of hex screws. The longitudinal ridge is cut away for a distance of 10mm and the edges are undercut to form dovetails that accept a threaded bracket mount for the rear guard screw which slides into place. The trigger unit sits over the rearmost 38mm section of the ridge and is attached to the receiver with a single hex screw. The main job of guiding the bolt thus falls to the trigger sear which pivots up from the trigger housing to engage a groove milled into the underside of the bolt body.

External and internal surfaces of the receiver along with the bolt body are rumbled and bead blasted resulting in unusually smooth surfaces which makes the action cycle with butter-like smoothness.

The trigger mechanism is contained in an alloy housing and all the working parts, including the trigger blade, are stainless steel. The knurled safety catch works fore and aft in a recess in the side of the trigger unit and is tensioned by a horseshoe- shaped spring. Only the most expensive European rimfires and simonpure target rifles have such a fine trigger. It’s non-adjustable, and claimed to be set at the factory to break at a crisp 2kg, but a 1kg spring is available on request. My test rifle’s trigger let off at a crisp 2kg.

The maximum pressures generated by the .17 HMR and .22 WMR are not much different to the 25,000 psi of .22 LR rounds, but higher pressure is maintained longer because of the larger charges of slower burning powder used in these rounds. The higher pressures deliver a higher level of backthrust against the bolt of the rifle during firing. This requires more breech-locking strength – something the LA101’s bolt has plenty of.

Rear locking dominates the design. The bolt is fabricated in two pieces, the bolt head and the bolt cylinder which backs it up. Three locking lugs spaced equidistantly around the rear end of a piece separate from the bolt body engage recesses in the rear of the receiver and lock rigidly behind hardened seats. The front edges of the lugs are beveled to allow them to enter the locking recesses more freely and an angled surface on the rear of each lug cams them into engagement as the bolt is closed. When the bolt handle is lifted a hardened bevel at the base of the bolt handle contacts a cam face on the rear of the receiver to force the bolt a small distance rearward for primary extraction of the fired case.

Analysis can reveal some of the practical advantages of the modern rear-locked rimfire action. The rear lugs are better suited for rimmed cartridges, which feed more smoothly without locking cavities to travel over. A somewhat shorter bolt stroke is also possible. Finally, with less potential surface area in the receiver ring for a defective cartridge to act upon, combined with a gas port on the right side, the safety factor and strength is improved. The majority of rimfire actions rely solely on the root of the bolt handle for lockup, only a few like the CZ 452 have a second lug on the opposite side of the bolt body. An evenly spaced three-lug array like the LA101’s goes one better, in providing very stable and uniform support. The receiver is very heavy with a massively proportioned mid-section which makes it very rigid, something conducive to fine accuracy.

Finally, the need for extra uniform locking support with rear lugs has an indirect effect on cartridge ejection in the LA 101. The locking lug array is specially aligned with respect to the ejection and magazine ports which made it necessary to cut the ejection port on a slightly higher angle. Ejected cases don’t come out at such a high trajectory that they would hit the windage knob of the scope and fall back into the receiver.

The bolt body has a diameter of 16.85mm and its forward section is the familiar half cutaway design with a ridge up the centre to push the cartridges into the chamber as it travels forward. The bolt face is equipped with dual extractors made of steel not pressed tin like so many other rimfires. The bolt face is recessed to partially shroud the upper half of the cartridge rim and the breech end of the barrel is tapered to cam the extractors away from the rim which is further shrouded at the bottom by the short feed ramp. The firing pin is chisel-nosed. The trigger sear rides in a longitudinal slot in the rear section and doubles as the bolt stop. The bolt handle is triangular and straight equipped with a pear-shaped nylon knob; the bolt cap is made of the same material. The extra heft and bulk, however, only serve make the rifle easier to hold steady for offhand shooting in the hunting field.

The flush fitting cartridge box made of nylon holds five rounds of .22 LR ammo. It’s compatible with the CZ452/455 and the .17HMR/.22 WMR boxes also fit the CZ455. A 10 round magazine is in the pipeline. The release catch is incorporated in the front of the magazine well which makes attachment and removal easy and positive.

Military grade steel barrel is cold hammer-forged on the same machine that makes barrels for ADF’s military rifles and is finished by being rumbled and glass bead blasted. Rifling has 6 grooves and a righthand twist rate of 1:16. The bore is finely finished and is mirrorlike. During assembly the barrel is threaded into the receiver rather than being pinned. It has a length of 531mm measured from the muzzle to the face of the locked bolt and dimensions are pretty hefty for a rimfire. Diameter at the receiver is 25.30mm and it is straight tapered to reach 17.25mm at the dished muzzle which has an 11 degree target crown. The LA101 Crossover has a proprietary semi-match chamber for optimum accuracy with a wide variety of ammunition.

The black stock which has modern tactical styling is made from the same glass fibre reinforced material as the new EF88 rifle currently being developed for the Australian Defence Force as well as the F90 export variant. The butt has inserts to vary the length of pull ( 325, 335, 345 and 355mm) to suit shooters of different builds. Molded-in roughened areas at grip and fore-end provide a non-slip grip.

The fore-end is hollow with reinforcing struts, angled on the side and slightly flattened on the bottom to sit steady on a rest and has an integral moulded trigger guard. The comb is high and straight for scope use and capped with a rubber recoil pad. The vertically curved pistol grip is a comfortable to grasp and carries the factory logo in the grip cap. A butt hook makes the butt look a bit clubby, but is there to give an improved hold when shooting from prone. Stock has a nice satin finish and is equipped with Q/D sling swivel bases. Inletting is close and neat around the receiver and the gap around the barrel is minimal. The stock has a 4-point bedding system and floating barrel.

The LA101 weighs 3.1kg, has an overall length of 997mm (1007mm for magnums) and comes with two-piece Weaver-style bases attached to the receiver. I’ve saved the best news for last; the Titanium coloured finish on receiver, barrel scope bases and bolt handle is Cerokote H series. Nothing is cheap about this Aussie-made bunduki, it’s been made to a standard and not a price; it’s reeks of quality throughout.

For testing I attached a Meopta Meopro 3.5-10×44 scope in Weaver medium height rings which increased the all-up weight to 3.5kgs. Although the rifle balanced nicely for offhand shooting, now that I own one of these rifles I’ll be looking to fit a more compact scope – something like the Meopro 6×42 or a Leupold 2-7x.

To determine just how accurate the LA101 Crossover was, testing was carried out with 14 different .22 LR cartridges, a mixture of brands, both target and game loads. The rifle functioned perfectly throughout the firing of over 300 rounds with feed from magazine to chamber smooth and positive. You can check the results in the table below. 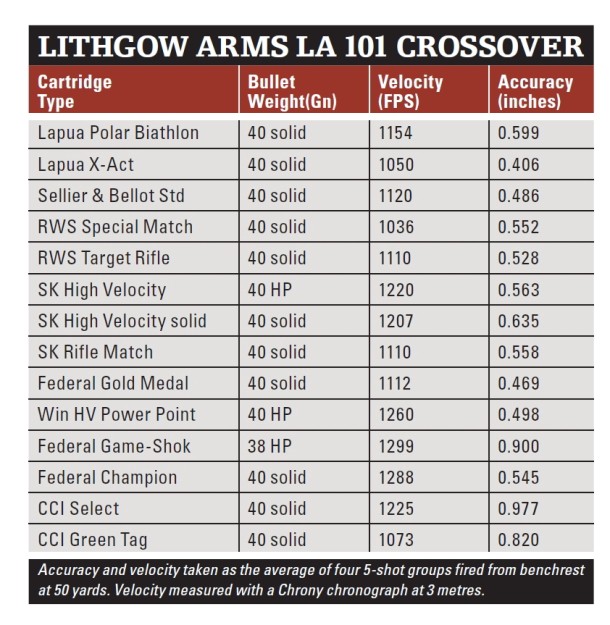 omg
2
omg
Nick Harvey is one of the world's most experienced and knowledgeable gun writers, a true legend of the business. He has been writing about firearms and hunting for more than 65 years, has published many books and uncounted articles, and has travelled the world to hunt and shoot. His reloading manuals are highly sought after, and his knowledge of the subject is unmatched. He has been Sporting Shooter's Gun Editor for longer than anyone can remember. Nick lives in rural NSW, Australia.